I’ve been saying it here literally for years, the MCU is missing the boat on one of their most outrageously hilarious superhero teams: The Great Lakes Avengers! Since the Avengers are still all the rage and essentially dismantled at the moment, it’d be the perfect time for the comedic gold of Wisconsin’s very own superhero team to get a series of their own on Disney Plus. The team was created way back in 1989 by none other than comic icon writer and artist John Byrne and their introduction back then meant a lot to me at the time being a Wisconsinite myself. Essentially a band of misfit z-grade superheroes who decide to start an Avengers team of their own to rep the Midwest, only problem is their crime fighting skills aren’t exactly “Avenger’s level”. Nope the team’s got A LOT of work to do-but none of that’s gonna stop em’ from tryin’ dammit!

Even at one point Hawkeye and Mockingbird attempt to train them, which of course proves to be quite challenging in itself. The team went on to later appear alongside Deadpool and also had a great 4-issue miniseries by Dan Slott that’s a must read. They more recently tried to give them their own monthly book, but it really lost the dark comedy angle and edge of their previous appearances and was cancelled. This great cover by John Byrne shows once again how effective simplicity can be as we got our very first look at the mighty Great Lakes Avengers!~

Yep I had to share this weird ass little team up way back from January 1984-yeah it’s NOT a hoax! This is a team up of Franklin Richards and Aunt May!! As far as covers go you don’t get much more epic than THIS! Right? Yeah well Peter Parker and The Fantastic Four thought it was a good idea to leave Franklin alone at the circus with Aunt May and fortunately it resulted in a bizarre team-up against Galactus! Yep Galactus accidentally transforms good ol’ Aunt May into a Herald! Better yet she names herself “The Golden Oldie”!! This was part of the “Assistant Editors” month at Marvel, back in the day when reading Marvel comics was a helluva lot more fun (and cheaper) than it is today! Basically the normal editor went on vacation for a month and it brought on a slew of ridiculous stories…ahhh…the good ol’ days are tuly missed…

This weeks cover is not a Spider-man battling the Green Goblin high above the city or Superman battling Brainiac to save the world. Nope it’s Iron Man battling a demon in a damn bottle!! BOOZE! I love this cover and this era of Iron Man. Tony Stark was a complete fuck up for a while and I love that they gave him some real life problems to deal with in the eighties. You can see from this cover alone why Robert Downey Jr. was chosen for the role, he goes down in history as the Iron Man much like Christopher Reeves will always be the most perfect Superman of the silver screen. Bob Layton did an amazing job of portraying Tony Stark at his worst! 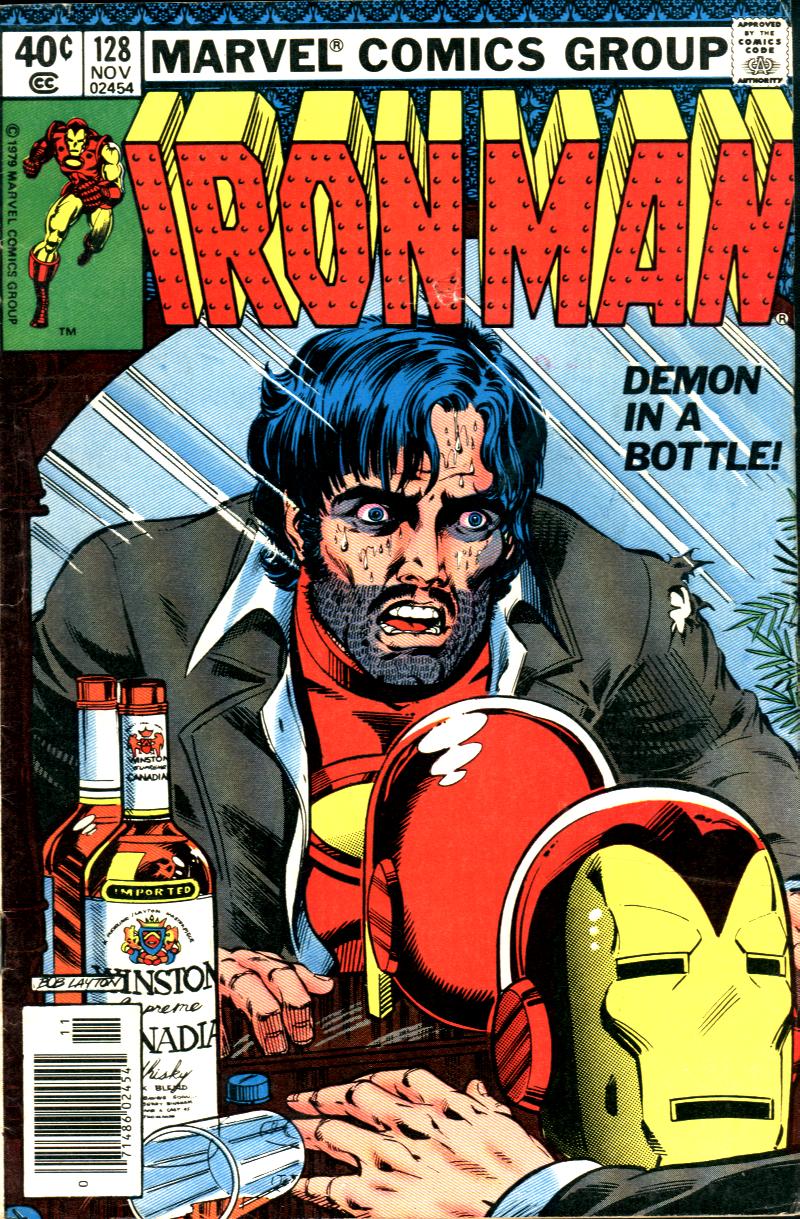