I just checked out this trailer (released today) for the upcoming “Banana Splits” feature length film!! I know a lot of people out there don’t have any idea what hell a The Banana Splits are, but being someone who was born in the 1970’s (it aired from 1968-1970) I saw lots of this one on reruns! 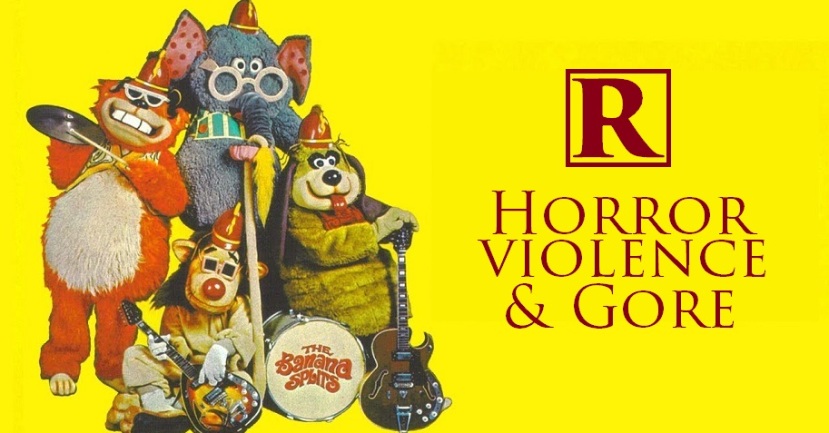 Before the success of “H.R. Pufnstuf,” (who most probably don’t know what that is either anymore) Sid and Marty Krofft cooked up this wacky, live action, slightly psychedelic puppet themed Hanna-Barbera children’s series. Its theme tune, “The Tra La La Song (One Banana, Two Banana)” is still iconic amongst many who grew up in the 1960’s, 70’s and even the 80’s. Check this original footage out from the show, it’s clearly perfect to inspire a horror flick:

Well this new trailer is quite a welcome surprise, I’ve always kinda thought the characters from the tv show were slightly creepy and it seems someone else was in agreeance. The Banana Splits are now entering the horror genre and I’d guess it must be because for years there’s been talk of a “Five Nights at Freddy’s” live action horror movie that’s been in developmental hell. So hey why not let the Banana Splits steal the damn spotlight? It looks like they’re maybe mechanical / animatronic puppets like Chuck E. Cheese or the “Showbiz Pizza dudes” who are also creepy as hell! I’m all for this and I think the trailer looks like a ton of fun! My childhood nostalgia has returned via the SyFy network(?!) to possibly quench my horror movie thirst! Check it out!!