I’ve been getting pretty excited for the big anniversary issue (#600) and have been trying to figure out what this huge reveal/development/twist is going to be that Marvel has been so vocal about the last few weeks.

At this point we’ve pretty much all seen the ads for ‘REBORN’ in the last few weeks’ comics, but it seriously raises some interesting questions that may develop in #600: 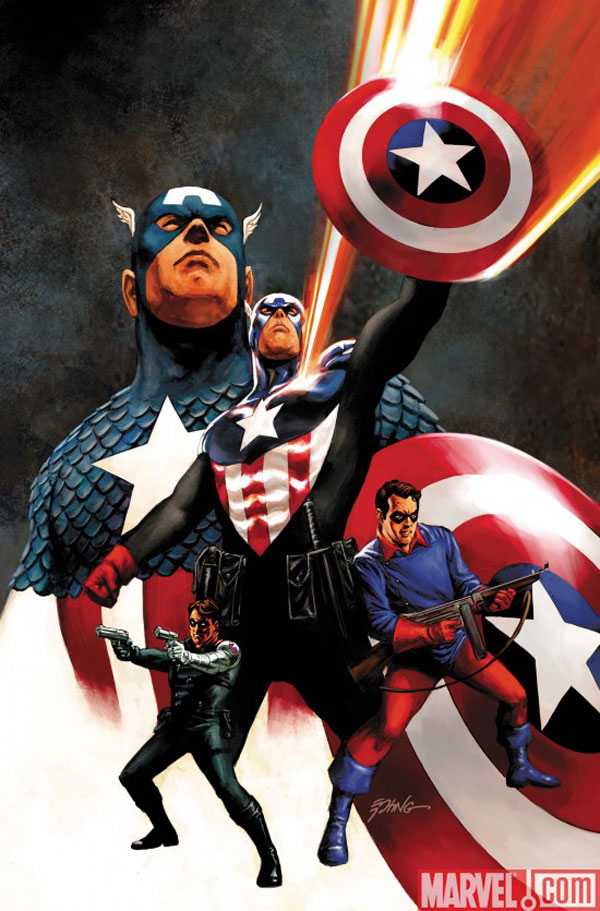 Who or what is being reborn?

The obvious answer would be the return of Steve Rogers but Brubaker has been building up Bucky for a long time now and the character (as Cap) has only just recently been integrated into the Marvel Universe proper, it would seem illogical to bring Steve back right now. But with the movie in the works, Steve will have to be back by 2010 making it very possible he will return soon.

There’s also a lot of speculation that it has to do with the first Captain America, Isaiah Bradley but this seems doubtful because he’s been only a small part of the Cap mythos for a very short time.

My money is on #600 marking a major chapter in the 1950’s Captain America’s life. We’ve been given little bits of info on him over the last several issues and I think it’s leading to something major for this guy. Could ‘reborn’ be referring to him turning over a new (heroic?) leaf and presenting himself as Captain America to the Marvel Universe public? Or, maybe Norman Osborn will be giving him a ‘second chance’ as a member of his Dark Avengers as their resident Captain America?

Or what if the 50’s Cap as we know him in Brubaker’s arc, is actually the real Steve Rogers? What if it’s not even revealed right away but we get a major clue in #600 and the next year or leads up to the reveal? We know Steve has to come back for sure within the year and I trust Brubaker has been using this character for a good reason yet to be revealed.

What are everyone’s theories on this #600 reveal and it’s possible developments in Brubaker’s story?