I had a little double feature “party by myself” last night consisting of me, a bottle of wine, my cat, some weed and two horror flicks from the late early 90s. Always in hopes of discovering a lost and forgotten gem! This can result in one helluva fun evening alone or an early night drifting off on the couch to some boring cinematic trash. Luckily for the most part it was the first. I started my first glass of wine off with a movie from 1990 called ‘Pledge Night’. 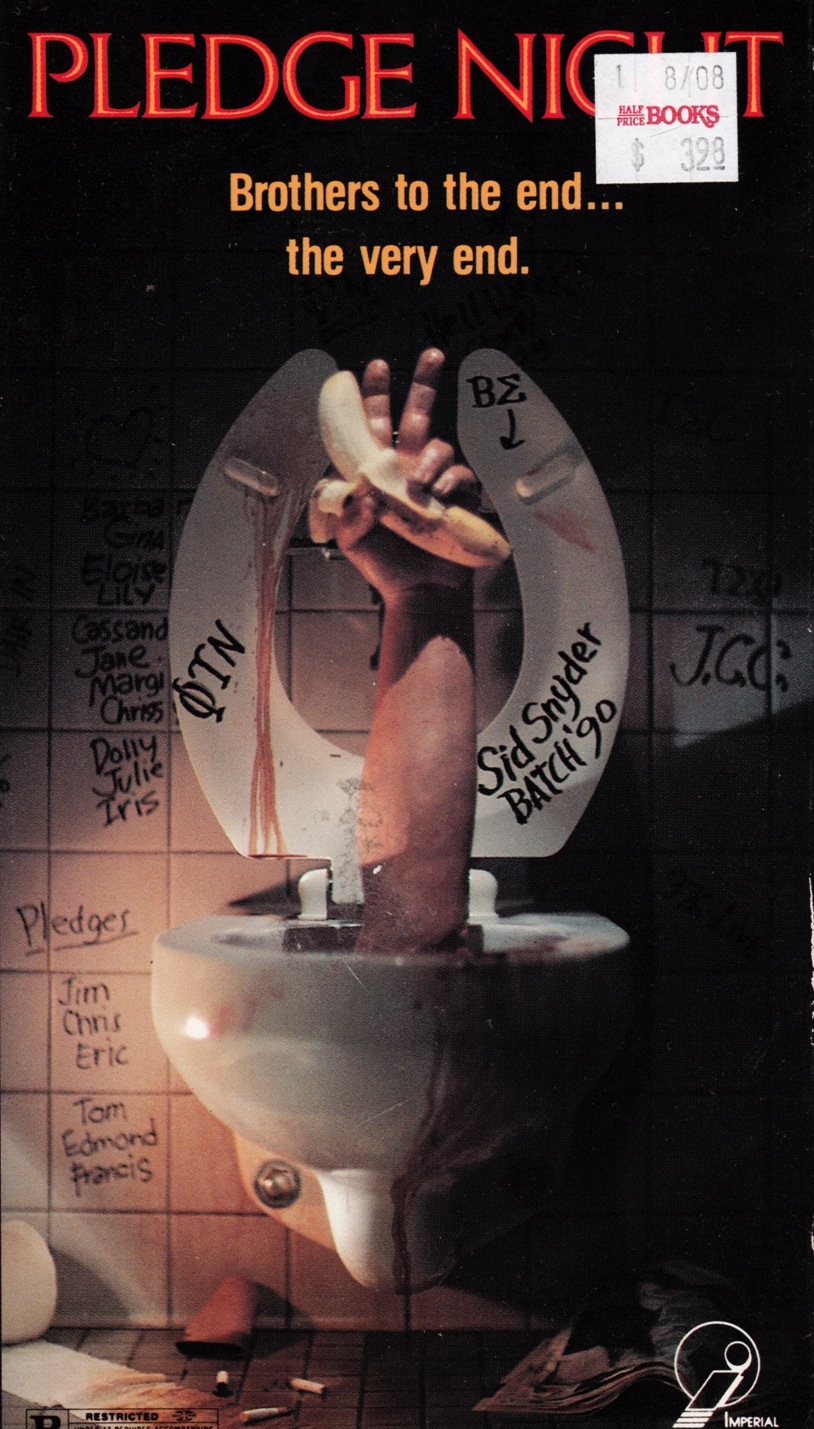 I’ve been wanting to check this one forever, mostly because I’d heard that Joey Belladonna from legendary thrash metal band ‘Anthrax’ had a role as the supernatural slasher ‘Acid Sid’ and his band even provided the film’s soundtrack. Unfortunately the measly minute and a half he actually appears and the bad ass metal soundtrack his band drummed up doesn’t make this a lost 80s horror gem. Pledge Night instead spends most of it’s run time being a dumb frat boy comedy. Basically putting it’s characters through ‘Hell Week’ in a series of gross out initiations for the first hour. By the time the horror aspect kicks in it’s a bit too late in the game and “Acid Sid”, the evil supernatural hippie frat boy fails to deliver the scares despite being a pretty cool looking villain. Instead he cracks lame one liners after each of his kills and we come to find Joey Belladonna doesn’t even actually play the character in his hideous slasher form but rather in a short flashback. There’s a few neat gore scenes sprinkled amidst the potty humor but overall Pledge Night fails to deliver much of anything entertaining to the table. It merely left me wondering what connection Anthrax actually had to this damn movie? If this’d been the second feature I’d have probably tapped out early on the couch for some zzz’s.

Next up was a 1993 horror flick called ‘Little Devils: The Birth’ from the director of 80’s cult film ‘Rawhead Rex’, starring Marc Price who played ‘Skippy” on ‘Family Ties’ and also starred in the awesome ‘Trick R’ Treat’. 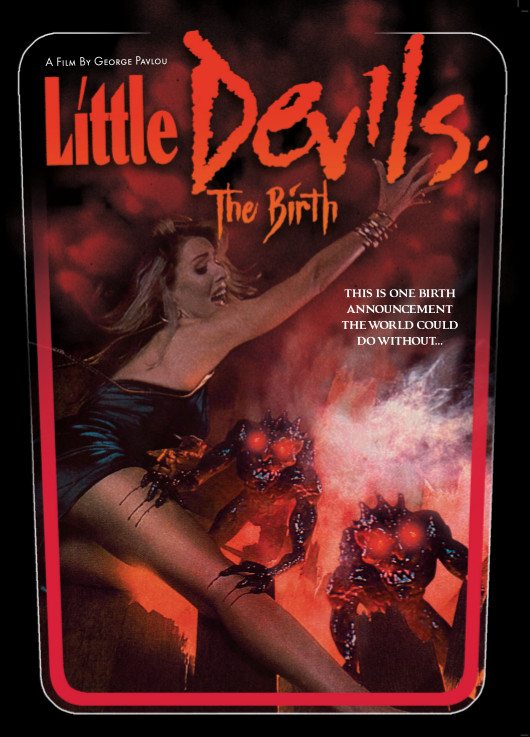 Luckily this one had a better cast & some pretty likable characters to at least keep me invested in the ridiculous plot. It basically plays out as a second rate ‘Ghoulies’ knock off but fortunately had enough charm to justify staying up well past midnight to polish off the rest of the bottle of wine. We follow Price’s character,a struggling writer who rents a room from his crazy sex-obsessed older landlady and shares the house with his weird ass neighbor who’s up all night creating demon dolls from some glowing sludge from the local mausoleum. He also meets a beautiful exotic dancer and the two of them fall “madly” in love while simultaneously discovering that evil “little devils” are running rampant, killing people around his rental unit. This by no means is a good movie, it appears to have been shot on video, the special effects are pretty atrocious & it’s run time is about 20 minutes too long.

All that being said it somehow managed to keep me entertained for it’s entire damn duration. The comedy works here quite well and there’s definitely some decent chemistry amongst it’s cast. The little devil’s themselves are nothing to write home about and are probably the least exciting thing about this movie. They for some reason run around killing people with miniature flame throwers and in comparison make the puppets in the ‘Ghoulies’ look like academy award winning works of special fx wizardry. However despite it’s flaws this ‘Little Devils: The Birth’ had enough going for it to recommend for at least one solid viewing. At the end of the day Marc Price makes it worth an hour and forty minutes of any fan a trashy cinema’s time.

Most People know good ol’ Alan Thicke as the loving quirky father on the 1980’s cult classic sitcom “Growing Pains” however it’s little known that he also had attempted to be a pop music heart throb in 1984!! Don’t believe me? Check out this his pop single “Thicke of the Night”! 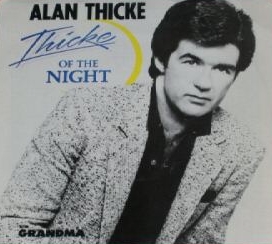 Nice one, Allen, incorporating your own last name into the title for a little more sex appeal! I’ve gotta say Thicke kinda brings it on this track, I’m kinda impressed at his 80’s pop skills! Who’d have ever thunk it to be true?!

Well I was curious why his single said “Grandma” on it? Apparently that’s the b-side to “Thicke of the Night” yeah a pop song about well his Grandma!! What a sweet guy! Perhaps that’s what spoiled his pop career I’ve heard pop songs about grandma just never quite do it for the kids! Check out Grandma below and judge for yourself!

Here we go again with another movie pick for you this Halloween that you should be able to easily find for a Halloween horror movie night! Let’s face it movies are expensive to go to these days-and who the hell has got the money to risk on a shitty mainstream Hollywood horror flick these days? Well save some money and fear not fellow dorks I have got another gem for you to check out! 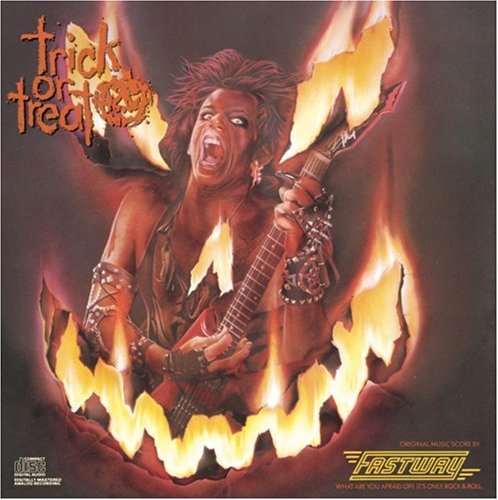 Trick or Treat from 1986 is a GREAT little bundle of cheezy horror served up they way it should be in the 1980’s-with a rockin’ metal soundtrack! Yeah this movie is all about heavy metal and the harm it can do to you when you play records backwards! Back in the 80’s people were obsessed with playing vinyl backwards because they swore all the metal bands were putting subliminal evil messages in their music! However I bet if you played some Patsy Cline albums backwards long enough you’d sure as hell hear something that’d be perceived as evil! 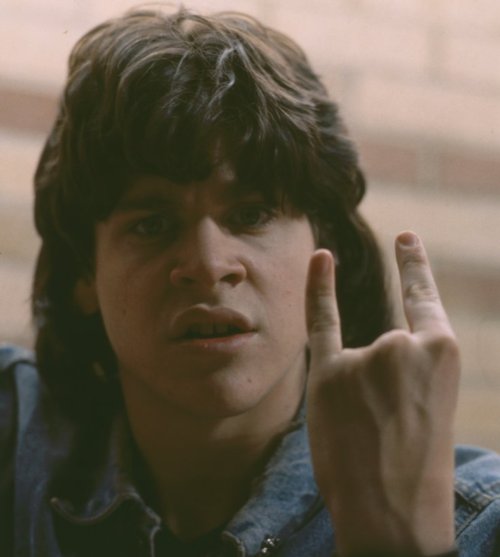 Anyway this rad movie has Marc Price, Family Ties’ “Skippy”, as our teenage metal head outcast nicknamed “Ragman”. He’s picked on by the jocks and longs for love from one of the most popular girls in his school. Well one day he gets a present for local metal DJ played by Gene Simmons, a final unreleased record by his favorite artist Sammie Curr, a recently deceased heavy metal superstar. When he takes it home and plays it bad things begin to happen and soon Sammie Curr returns from the dead with demonic powers and even more fucking bad ass rock and roll chops! Throw in a few monsters, some rock n’ roll and a ton of 1980’s electricity flying all over the place and boom-instant classic. 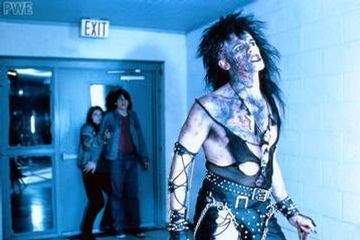 This is pretty much the perfect 80’s horror flick it’s just a damn good time all around. The perfect movie to drink beers with friends on Halloween. The more recent dvd releases of this movie have put pictures of Gene Simmons & Ozzy Osbourne on the cover implying they are the major stars of the movie, laughably they end up in the movie for a combined total of maybe a minute and a half tops! Still there a ton of fun to be had with this cult favorite, if you haven’t seen it check it out this Halloween and if you have it’s probably time to rock out to this once again!