This Halloween I’m gonna make a few obscure retro foreign horror movie recommendations that you may have missed out on from that oh so sweet era of the genre: the 1980’s! I just checked out a rad little Hong Kong Horror movie from 1987 called ‘Vampire’s Breakfast’!!

This forgotten little horror gem is a load of fun with a heapin’ dose of spooky settings, comedy, romance and action in the way that only Hong Kong cinema delivered back in the day. I really enjoyed how for the most part this one plays the horror pretty straight, keeping the all too usual Hong Kong “slapstick potty humor” out of the equation entirely. For me some of the 80’s Hong Kong stuff can be completely ruined by crappy potty humor and comedy that just plain hasn’t aged well (and keep in mind I’m not normally easily offended either). Nope, here we have a cool cast of characters and genuinely nasty “American/European” style vamp on the loose rather than the traditional Chinese hopping kind. We’ve got some funky footage of Hong Kong in the 80’s here and totally sweet fashion of the era in full swing.

The iconic Kent Cheng stars as a newspaper reporter who’s hot on the trail of a serial killer and after poking around a police crime scene begins to suspect that the killer might actually be a living breathing vampire. No one takes him seriously except a boozed up car stereo thief, who he reluctantly teams up with to track down the suspected bloodsucker. Along the way though he interviews one of the killer’s victims who barely escaped with her life, the oh soooo cute Emily Chu looking as stylee as ever.

Of course it’s love at first sight and we’re then treated to a full on 80’s style Hong Kong “John Hughs” cheezy romance, which is a total charm amidst the horror. The thing I really dig about this is movie, are the horror elements, unafraid to get nasty when it needs to as well as some action sequences that can be pretty exciting as well. No kung fu here though, which is kind of nice actually as it plants this one in a more believable horror setting, but that’s not to say the portly Kent Cheng can’t deliver the kicks, check out 1989’s ‘Vampire Buster’ to see his skills. 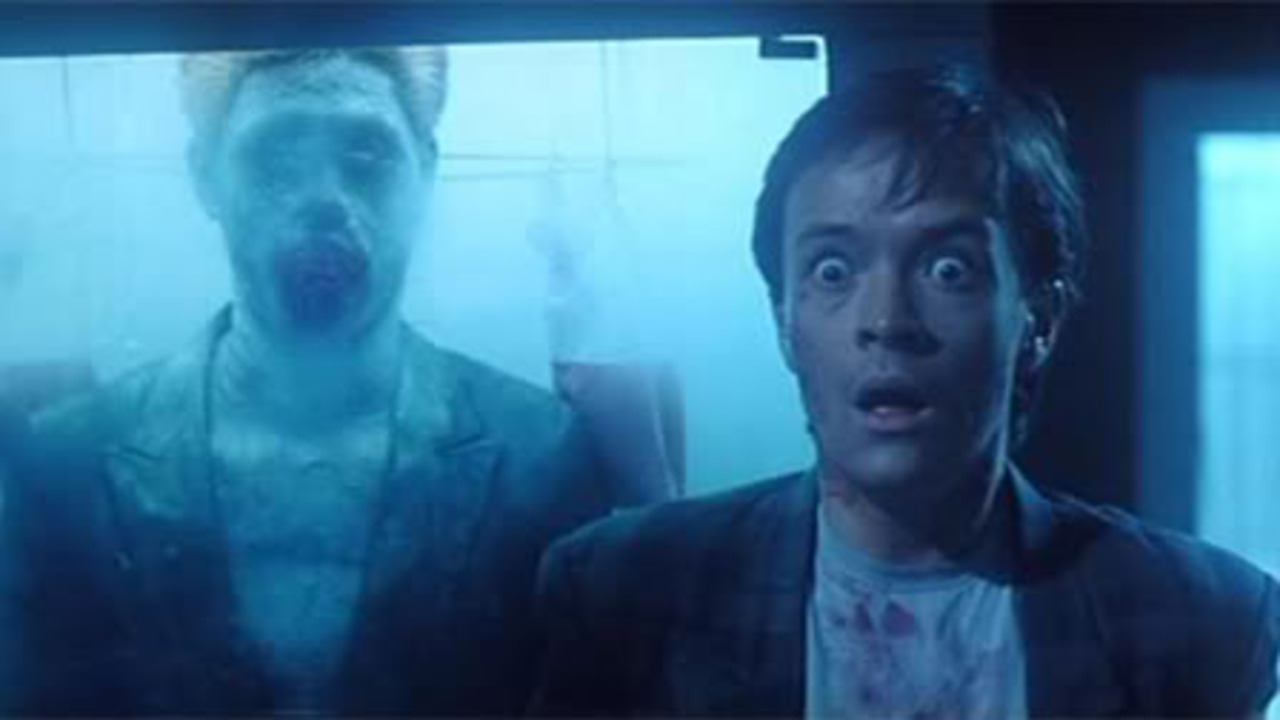 There’s a lot to love here if you’re looking for something different this Halloween, the vampire here is plenty fierce as well. He’s got a pretty sinister look and raises plenty of Hell on the foggy streets of Hong Kong. There’s also some unexpected moments of gore as well that ramp things up nicely in the finale. I’d say this one definitely deserves more love and most definitely a cleaned up blu ray release with more fleshed out subtitles. A colorful, creepy tale full of endearing characters and a brisk pace make this one standout viewing this Halloween for those who love uncovering hidden gems from horror’s sweet spot era of the 1980’s.

Happy Valentine’s Day everyone! There’s love in the air today so we’re going to have to go way back to the 1990’s, particularly 1997, which admittedly was an era where I wasn’t religiously reading comics books like I was in the 80’s and early 90’s. Here though is an actual Valentine’s Day special from Marvel that I thought was particularly interesting for the choice for one particular couple featured on the cover..,,Titania & The Absorbing Man!! They strangely feature poor Daredevil and Venus all by themselves, we of course get the obvious couples of Spidey and M.J. & Cyclops and Phoenix. But the inclusion of the powerhouse duo of Absorbing Man & Titania is pretty unexpected, even though they were (are still?) a true match made in heaven. They met all the way back in ’84’s classic ‘Secret Wars’, eventually ended up getting married and continued to kick ass all over the place together. I’ll admit I’ve never read this one, but my interest is peaked as I’m pretty curious if the two of them actually get a little story of their own! 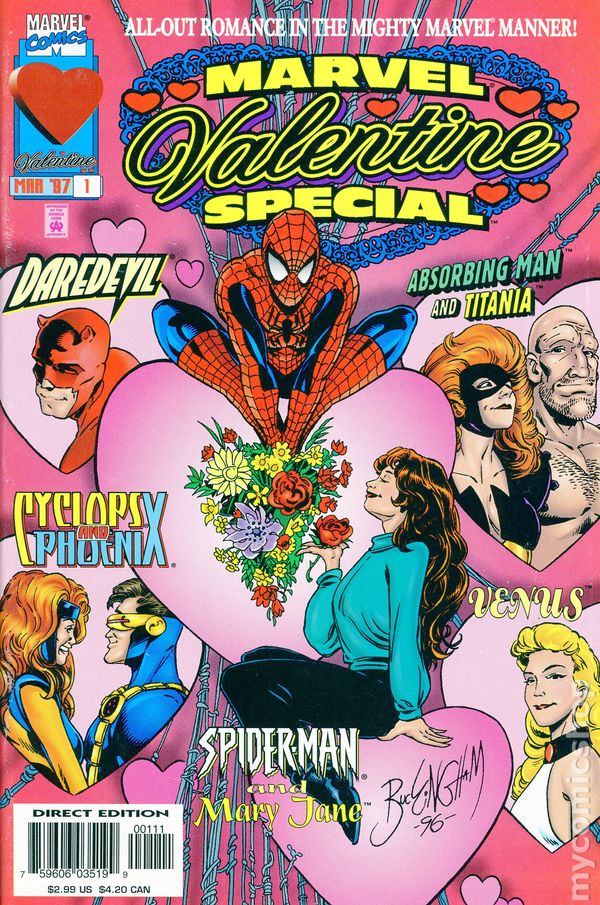 I’ve been thinking about this since I saw Captain America: The Winter Soldier in theaters, it’s like a big elephant in the room at this point! We just have to address this, the movie Captain America is most definitely still a gosh darn virgin!! Am I wrong?! Nope! Movie Cap was born in 1918 so technically he’s a 96 year old virgin-It’s been three movies that this Cap portrayed by Chris Evans has been in, one being The Avengers and thus far Cap, though quite popular with the ladies since he got his muscles, has gotten ZERO action, aside from a few random smooches! Daaang!

So I think a great plot point of the next Captain America movie must be him finally losing his damn virginity already! I could see this being an incredibly funny moment being discussed by him and his fellow Avengers at a bar over a few beers and I can already imagine a ton of jokes involving Tony Stark, Banner and Thor about this. Now though the bigger question is who’s going to be his first?! Let’s face it Cap is quite the goody two shoes, so he may benefit from a more edgy lady like The Black Widow, or could go old school with Agent Carter (well that might be a bit weird), or maybe he’ll hook up with that SHIELD agent he was talking about?

The Avengers are in serious need of some options for the guy, Black Widow is hot and all but let’s face it she’d tear this momma’s boy’s heart to shreds! Or maybe Cap hasn’t come out of the closet yet?! Maybe he and Bucky will hook up?!! Either way it’s been too many decades for the guy, he’s gotta be feeling some serious sexual frustration at this point with all that super soldier serum pumping him up too, whatever the case he better make sure the big moment is worth the wait…. 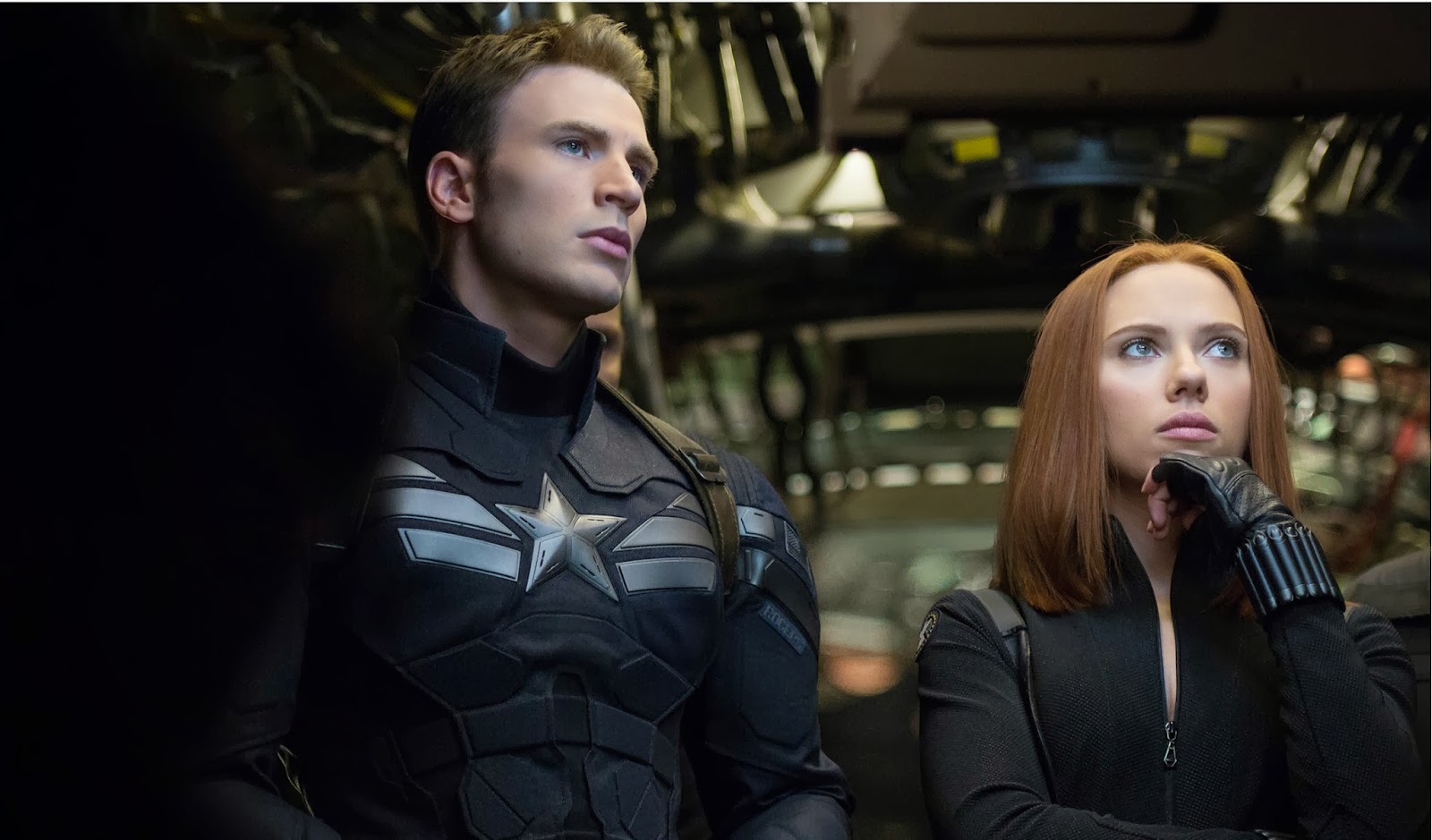 “Uggh…I can’t focus on a word Fury is saying with this raging boner I’ve had since we made out in that mall earlier!!”