I’m a big fan of the 1989 cult horror flick ‘The Laughing Dead’, If you’ve never heard of it and are a1980’s gore horror fiend, well I’ve a feeling that it’s gonna be your new favorite “lost” 80s gem. Rumor has it that it just might be getting a fancy blu ray release?! I hope that’s true! Well it’s director/cult horror novelist/composer extraordinaire S.P. Somtow is back after a long hiatus starring in and writing the latest creepy outing all the way from Thailand with ‘The Maestro: Symphony of Terror’. 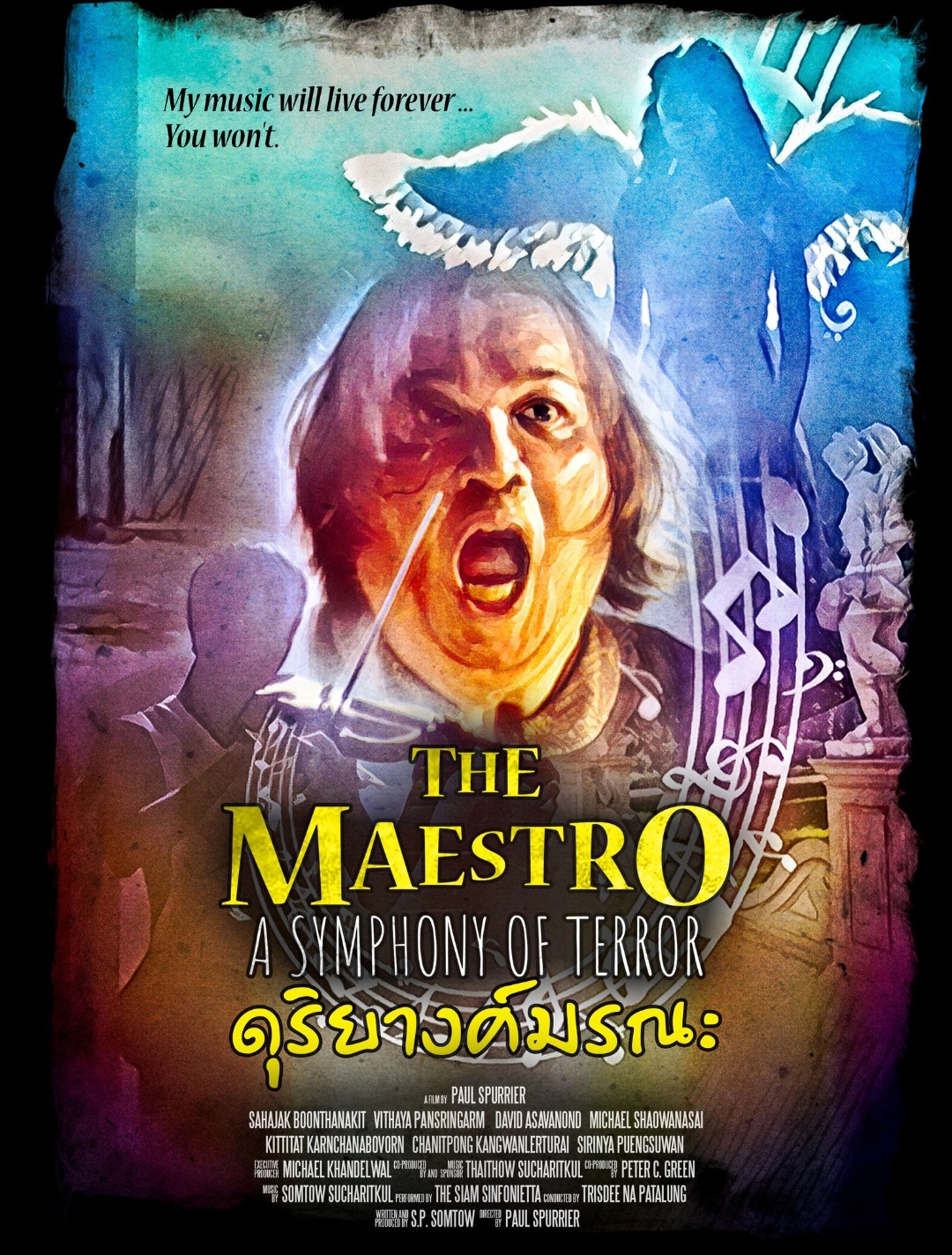 The tale of a musical genius haunted by his past and pushed into a state of pure insanity, The Maestro tells the story of a mentally unstable man named Arun (S.P. Somtow), a dedicated composer who attempted a run for fame in Europe but ultimately finds himself deeply depressed, back in Thailand teaching rich kids music at a local shopping mall. Behind the scenes though, he’s been secretly planning a wildly dark magnum opus called ‘The Tongues of Angels’, his ultimate goal: premiering it to the entire world on a livestream during the Covid 19 pandemic. His wildly demented ambition however may induce a lot more than musical madness but also death to those who threaten his journey.

So yeah I’ve been quite excited to check this out, but also had hoped Somtow would be at the mantle as director on the project. I really enjoyed his campy approach on ‘The Laughing Dead’ and the comedic elements incorporated with the heavy effects work of legend John Carl Buechler made it a total blast. That all being said ‘The Maestro’ does definitely deliver some of Somtow’s signature tones, but perhaps with a more artistic approach. Director Paul Spurrier does a decent job behind the camera, giving the movie at times a more slick approach then what I’d ultimately prefered. It combines lighter elements of horror with tense hypnotic dark classical music but also has a few more deeply disturbing psychological aspects at hand here as well that at times made me a bit uncomfortable. The lush locales of Thailand combined with Somtow’s intensely creepy musical compositions sonically assault in a truly unique way. 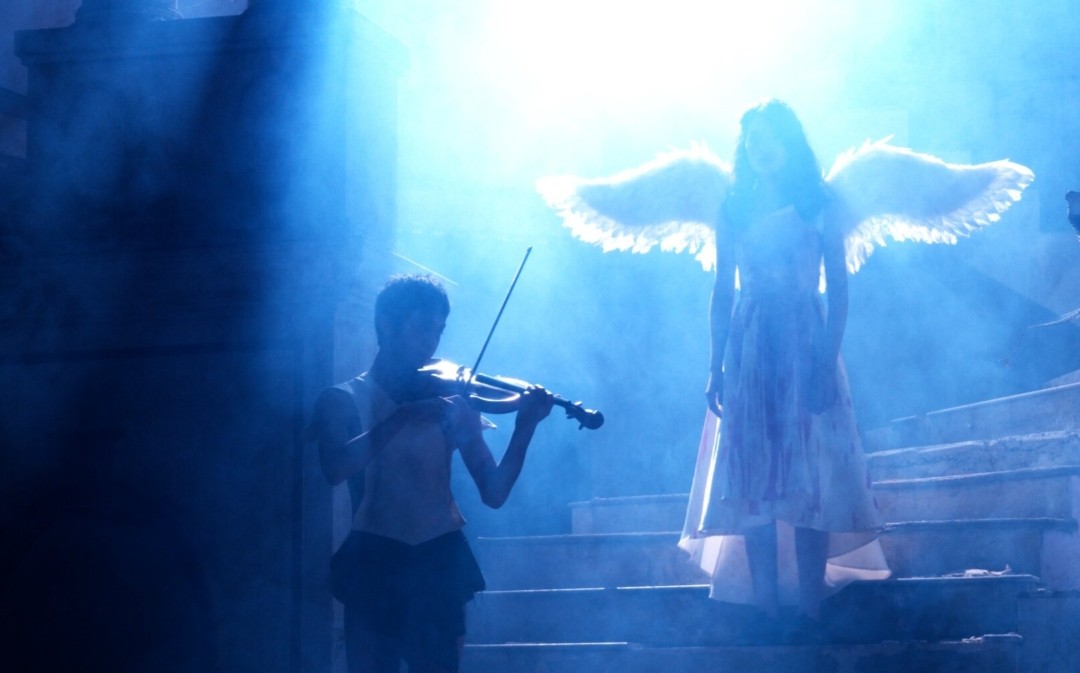 To be quite honest, his beautifully dark score is probably the biggest star of the entire movie. I’d been expecting something quite a bit different, with more old school fx leaning in on much more on the horror side of things. Instead this one plays out more a psychological thriller and is the first movie I’ve seen that takes place actually during the Covid 19 era. We finally see people on screen irritated with and fussing with their masks as well as trying to navigate life through these current bizarre times. But that doesn’t stop the shamed Maestro from seeking out his pawns, a crew of young musicians gathered from his mall class and the even from the streets.

Most of the madness takes place at a stunningly creepy decrepit mansion In the countryside where the symphony of horror begins to take shape. The Maestro has one thing on his mind: his music and will let nothing get in his way of composing the ultimate dark symphony.

This one’s definitely worth a watch, it’s got a great cast of young actors and Somtow shines again as the villain in a similar way he did back in ‘The Laughing Dead’.

I’m glad that S.P. has again returned to his horror roots, overall I think this is a pretty solid return to form. Going forward I’d like to encourage him to get back behind the camera again, I think he’s got the chops that the people thirst for today with the 80s cult camp fanatics. If anything ‘The Maestro: Symphony of Terror’ must be watched for it’s incredible musical finale, which blew me away. I’ll be hunting down the soundtrack for sure!!

Hello everyone from the land of self quarantine! Damn!! I really hope all of you out there are staying safe safe, staying home and keeping your damn sanity. With all that being said, I guess some good can indeed come out of all this isolation?  On the bright side there’s now plenty of time to watch as many movies, tv shows & read as many comic books as humanly imaginable. But let’s face it, the hard part is finding the quality entertainment to pass the time. So my question to you all: what should I be watching to take my mind off of all of this damn craziness? One can only watch so much of the depressing anxiety inducing news! So please let me know in the comments what the hell I might be missing out on!

I’d say the best thing that I’ve seen since this stinkin’ self quarantine began was a movie called “Good Boys” from 2019. It’s easily one of the best damn comedies of the last 5 years, no doubt about that. It follows the adventures of three tween boys as they go on a “desperate” mission to recover a lost drone they used to spy on their teenage neighbor in hopes of learning how to kiss for an upcoming “kissing party”. Of course along the way they get into a shitload o’ mischief and meet more than their fair share of ridiculously shady characters. It kind of reminds me of ‘Superbad’ with 12 year olds. Make no mistake, this by no means is a kids movie though, but the kids in it are full on comic geniuses. One of my new faves for sure. So check it out if you’re looking for something that’s likely to put a smile on your face in the times of pandemic. It won’t disappoint!

Otherwise the movie pickins have been pretty slim to be honest. I checked out a couple horror movies from the 80s that were filmed in my home state of Wisconsin, both of which ended up being interesting for that reason to me but easily could cause drowsiness to the average movie fanatic. Oddly, both I believe were released by Troma films at some point in time. First was ‘Blood Hook’, a semi-promising 80’s fishing slasher flick and second was the super snoozer ‘The Capture of Bigfoot.’

Both appeared, from their cool VHS covers to be epic horror flicks, but I quickly found myself nearly nodding off or having those wicked thoughts of god damn Corona weaseling it’s way back into my mind. Not a good sign. I am though, very intrigued with movies that were filmed in Wisconsin, especially horror movies which there really aren’t many of in the land of cheese.

The Midwest was not exactly the epicenter of groundbreaking filmmaking especially in the 80s. But if you’re from “America’s Dairyland” both of these are definitely worth a peek for that fact at least I suppose? 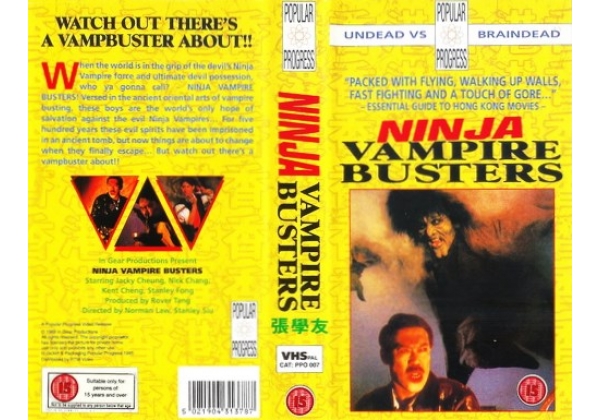 I did though check out a cool movie from 1989 called ‘Vampire Buster'(AKA Ninja Vampire Busters), a sweet Hong Kong horror comedy. It follows an haunted urn containing a wicked demon that mysteriously ends up in Hong Kong after being auctioned off to a rich Tycoon. Of course things go off the rails when the evil is accidentally released from it and wastes no time to begin possessing innocent people. Luckily the owner of the urn, “The Vampire Buster” is hot on its tracks, arriving in Hong Kong with his supernatural abilities and smooth ass martial arts moves in full effect.

Lots of cool 80s visual-effects going on here and some genuinely creepy moments, along with a hefty dose of well landing comedy make ‘Vampire Buster’ one of the standouts in my recent binge of Hong Kong horror viewing. Much of how entertaining it is largely relies on Kent Cheung’s (who stars as the magical demon buster) charisma and highly impressive martial arts skills. For a man of his stature he surely has some truly impressive feats of agility, bringing to mind the legendary Sammo Hung. Track down ‘Vampire Buster’ and I even advise watching it with the English dub track as it’s pretty well done and the voices for once I feel actually enhance the movie’s charm. That being said there was not one damn vampire to be seen in ‘Vampire Buster’….Ok now what have YOU seen that’s worth a watch during the pandemic?