So there’ve been some new pics from the set of Spider-man 2 and of course I’ve been pretty stoked on the idea of Paul Giamatti playing The Rhino for quite some time now. However the other day we got a teaser into his supposed “costume” or make up or in this case……Mech Armor?!! Ugggh…how I loathe these comic book movies more and more every day! I am sorry but THIS is not what The Rhino is supposed to look like people! 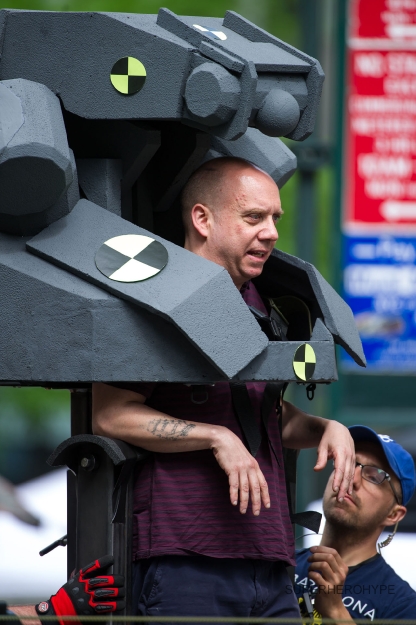 Understand why I am so irate?! So what the hell gives here? What is this shitty mechanical looking bullshit they’re trying to pass as The Rhino?! Is the new trend making all the bad guys wear mech armor these days (ie The Silver Samurai in the upcoming Wolverine movie)? If so I ain’t down with that! Haven’t we learned enough from the Willem Dafoe Green Goblin from the first Spider-man? Why bring an iconic villain into another movie and not stay true to the source material/look? Hell create a new villain, have Giamatti play him, dress him up in mech armor and call him the fucking Hippo? How about that? That would actually be better than ruining yet another rad villain for the silver screen….

p.s. On the off chance that Giamatti is just Robotech-in’ around and this is NOT the Rhino’s actual look I apologize. But these days I don’t have much faith left in Hollywood to do any justice to our comic book characters…

Hey isn’t it awesome we finally have gotten a good look at the new Robocop costume for the upcoming remake?! You’d think so huh? However this seems quite the contrary with this new pic that surfaced today. It feels like I just saw this new incarnation of the character recently though…like in The Dark Knight Rises!!!

It’s not Robocop its fucking BATMAN!!! Seriously folks this is the best they could do for Robocop in 2012?! I think they forgot…um…he’s supposed to be a damn ROBOT! My verdict is a big thumbs down thus far! I don’t know about you all but I will gladly take my 80’s Robocop over this loser any day! UGGGGH Hollywood remakes….