Ok so this is some weird news for sure that’s certainly caught fans of the ‘Child’s Play’ franchise by total surprise, Mark Hamill will be voicing Chucky in the upcoming ‘Child’s Play’ remake! WTF? Well as much as I wasn’t particularly excited for another cheap ass Hollywood remake of an 80’s horror classic I gotta admit that the trailer for this remake wasn’t nearly as bad as I’d initially anticipated. It actually slightly raised my curiosity in it altogether. 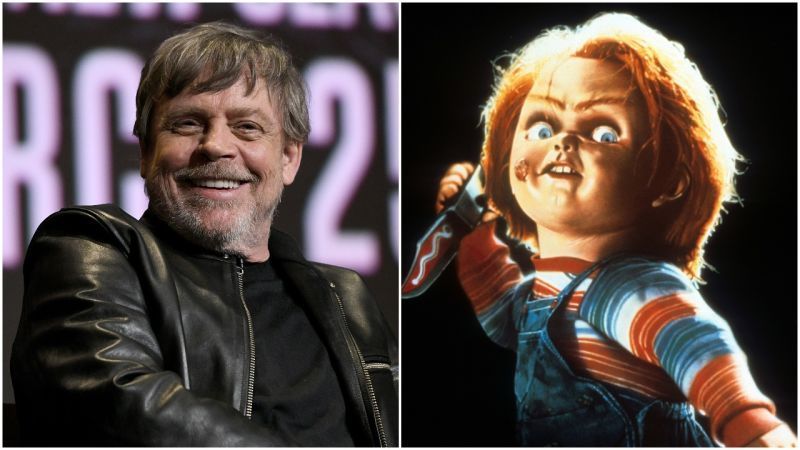 Being a big fan of the original franchise I think the latest ‘Chucky’ movies have been pretty damn good and I’ve remained excited for the next installment after the ‘Cult of Chucky’. I’ll admit, there will really only be one Chucky for me, Brad Dourif, but suddenly I’m finding myself conflicted by the news that Mark Hamill himself will indeed be the voice of the killer doll in the remake! What the hell am I supposed to do now? I of course LOVE Mark Hamill and I find some sort of new excitement welling inside for this damn remake!! DAMN!!!

So I guess I’m all in now, at least to give it a fair chance, Mark’s an amazing talent and has some experience in the horror genre already under his belt having appeared in some sloppy B-movie cult classics, the likes of ‘Sleepwalkers’, ‘Body Bags’, ‘Midnight Ride’ and a personal favorite of mine ‘Watchers Reborn’. It certainly seems like Mark is pumped for the job as his tweet about it on Twitter was hash tagged #luckytobechucky. So yeah there you have it at least ONE reason to get pumped for the new Child’s Play remake!!!

Well it’s definitely a real thing, now that the trailer has officially dropped for the Child’s Play remake and I’m not quite sure just how to take it. I mean, I think the most recent “Curse of Chucky” and “Cult of Chucky” were actually pretty damn good, returning to the more serious horror elements of the first couple movies while still keeping all of the movies cannon. Fans of the horror franchise were pleasantly surprised and after “Cult” it was clear the story wasn’t over and was even headed into unfamiliar territory. Now there’s concrete plans of Don Mancini’s current “Chucky” franchise being continued into a tv series for the SyFy channel AND this new trailer that fully starts the story over again.

This time Chucky though seems to be some sort of interactive doll with artificial intelligence. The just over a minute trailer doesn’t look entirely bad more so than it feel simply unnecessary. I mean we’ve tried this remake business all before with Halloween, Friday the 13th, Texas Chainsaw Massacre, A Nightmare on Elm Street and even the damn Leprechaun franchise. None have stuck and all of them are pretty much forgotten by horror hounds. I’ve got a feeling we’re in familiar territory here with the Child’s Play remake, the original is a perfect horror film in my opinion and I’m not seeing fans wanting a new Chucky, especially since Brad Dourif is still down to play the classic character. Another thing is the main kid character here in the trailer, to me seems a little too old maybe to believably be hanging around with a “Good Guy” doll or in this case a “Buddi” Doll. What do you think though? Is this new remake going to strike box office gold or just be another flimsy Hollywood remake to be forgotten a year or so later? Let me know!

I’ve been waiting for the ‘Cult of Chucky’ trailer to drop for a while now and today it’s finally arrived! Yep everyone’s favorite pint sized supernatural slasher has come full circle to do battle this time with his ol’ buddy Andy Barclay played by the original actor Alex Vincent! Damn!! I’m thrilled so far with what I’ve seen here as the events of the new movie take place after ‘Curse of Chucky’ and it looks too like we’ve got the old school cleaned up look of the Good Guy doll back which is in my opinion even more creepy than the damaged looks he’s sported in the last movies.

There’s also rumors of Chucky’s kid Glenn/Glenda from ‘Seed of Chucky’ could appear in this one, without the humorous approach. Hey that could be frightening if done tastefully but also the character could also appear to fight against Chucky. Also we see Jennifer Tilly and Fiona Dourif returning here as well…Could this be the last chapter? We’ll see come October 2017! Check out the trailer:

There’s been some rumbling lately from director Don Mancini about the next installment of the Child’s Play/Chucky horror franchise and it’s sounding like it might go old school and get personal. From some photos shared recently it’s looking like the Child’s Play 7 is touting the tagline ‘Chucky is finally coming home’ in a recent tweet. What many are speculating is that Chucky will be squaring off against his old nemesis, an all grown up Andy Barclay. In the recent tweet he tagged Fiona Dourif, Brad Dourif, Summer H. Howell & Alex Vincent with a picture of Mancini with an old house in the background along with the tagline.

In the post credits scene of Curse of Chucky we saw Andy Barclay get a mysterious package sent to his house, of course inside was good ol’ Chuck!! What we then saw was Andy ready with a shotgun firing a shot at Chucky when the screen suddenly goes black. So what the hell happened? I’m guessing this next movie will give us the gory details. What I’m hoping for is that the two to finally settle the score on screen in an epic battle that ties all of the movies together. Child’s Play full circle.

There’s even a rumor we might see Chucky’s son Glenn/Glenda back in action. But given the tone of the last movie perhaps he’ll either end up being an ally of Barclay or a more well rounded, psychotic menace. We’ll see, but count me in as the last movie was hands down one of the best of the series. I loved the horror aspect being front and center along with a much more seriously scary tone.

Could part seven be the series finale? If so I hope it delivers the goods because Andy & Chucky need some resolution in their lives!