‘Beyond The Gates‘ is the first feature film from Jackson Stewart, an indie horror movie I’ve been super excited about for a long time. Last night I dropped the seven bones on Google Play to check it out. What originally really excited me about this movie was it’s central focus on a sinister VHS board game from the 1980’s called…you guessed it “Beyond The Gates”. These creepy VHS games were pretty popular back when I was a kid, so of course I automatically dug the nostalgia factor that this one had to offer from the start. I also was quite happy to see Graham Skipper (The Mind’s Eye, Almost Human) as one of the leads and also horror icon Barbara Crampton (From Beyond, Re-animator, We Are Still Here) as the creepy host of the VHS board game.

This one has a lot going for it from the get go and it’s quite an intriguing little mystery. Long story short, two brothers come to find that their alcoholic father has gone missing leaving behind his business, an old video store that he started back in 1992. Ah yes, the local video store, what great memories I have of those. Well as the brothers meet up to box up video tapes, close shop and reminisce about their childhood they discover the old VHS board game in the office.

Things get stranger when they realize the VHS tape from the game was the last thing their father had watched before he disappeared. This begins a series of bizarre events as the brothers and one of their girlfriends decide to give the game a try. I don’t want to give away any clues of the story, it’s a pretty engaging movie and a great dramatic story of two brothers finding peace with each other and their past. There’s a lot in this movie that I can relate to personally and that honestly is the strongest aspect of ‘Beyond The Gates’. It’s got a lot of heart.

I did like this movie, however it could have been one of the best horror movies of 2016 if perhaps it had a bit more of an imagination with the horror side of things and hey maybe a bigger budget? The horror aspect of this one kinda let me down. There were a couple of cool scenes that seemed like they were warming us up for a knock out finale. Sadly that knock out never really arrived, in fact the finale seemed like something that we might have expected to see around the half way mark. The movie had a 3 million dollar budget and personally I think they could have stretched it a bit and really given us a more surreal adventurous final act. I’ve seen movies with smaller budgets go a lot further than this. To me it seemed like a good movie that maybe ran out of money near the end of filming. The potential for some truly crazy stylized 80’s horror was definitely there but it lacked the imagination to give fright fans a truly memorable experience.

Overall I liked this movie more as drama and if I’d have known ahead of time that that’s more of what this was I’d be a little less critical of the horror aspect of things. That being said I still give it a thumbs up for a sweet yet creepy story that knows how to pull at your heartstrings. Check it out!

I had the pleasure yesterday of watching ‘Dead Weight‘ a great little indie horror gem all the way from my home state of Wisconsin. I wasn’t sure exactly what to expect from this one and to be honest, I haven’t really seen too much in the way of cinema coming out of “America’s Dairyland”. I’d have to say that Dead Weight is much less of a horror movie than it is a drama set in an apocalyptic wasteland.

I could draw some comparisons obviously to The Walking Dead, as I’m fairly certain that writers and directors Adam Bartlett and John Pata are big fans (I’ve heard the DVD will feature artwork by original Walking Dead artist Tony Moore!) but this plays out as something much more than a mere carbon copy. Sure the story revolves around a small band of survivors of some sort of viral outbreak traveling a barren landscape and yeah they meet some ultra sketchy people along the way. What we are really witnessing is one man’s psychological breakdown as he desperately travels by foot to reunite with his lover in a small northern Wisconsin city.

The movie shows flashbacks of Charlie (Joe Belknap) and his girlfriend Samantha (Mary Lindberg) before tragedy struck while at the same time following him on his journey to reunite with her after these events. I really loved the contrast between the warm colorful flashbacks and the cold, grey, dismal look of Charlie’s journey in the aftermath. Who would’ve known that Wisconsin would make such a convincing setting for a zombie wasteland?

The film really looks great too, the locations chosen really give you a feeling of dread and isolation which makes it that much more tense when other survivors enter the equation. What also grabbed me was the tightly woven story, which I might add has it’s fair share of twists and turns, something I truly appreciate in my cinematic viewing when done effectively. The short explanation for what may have caused this tragedy was also an interesting addition to the plot as it unfolded.

Dead Weight is pretty light on the violence and we barely see a “zombie” in sight anywhere throughout the movie. To me that’s great, as I’m quite honestly pretty burnt out on the zombie genre at this point. It seems people are still cranking out zombie movies by the boatloads these days, jam packed with, shoddy gore, CG blood and weak ass plot lines. That’s exactly why Dead Weight succeeds, its unique character study plays out quite differently than most zombie flicks.

Without giving too much away, I’d say this is a pretty true to life tale of how people might actually act in this type of situation. Sometimes there are no real heroes and people act simply off of their own emotions and selfish motivations, making the idea of a situation like this much more hopeless and bleak. Something this movie did a great job of portraying. That’s not to say the movie was flawless, the flashbacks were well put together but I really wasn’t fully convinced of the love and emotion Charlie and Samantha had for each other. In fact the two of them together felt a bit off at points. It would have been nice to really feel exactly what made Charlie go against all odds to try and reunite with her. 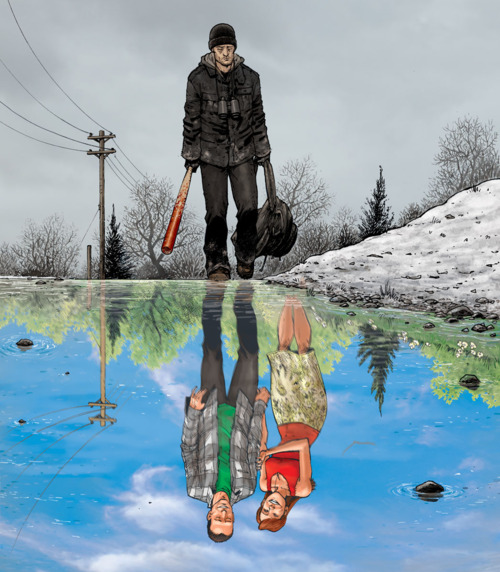 Plain and simple Dead Weight is a great slice of cinema from Wisconsin! An intriguing story and solid acting by all involved. This was a true independent film and the first for Adam Bartlett and John Pata. I was truly impressed that they pulled off a horror drama, I consider it quite daring as most people on a small budget in this genre go for the tired “over the top” zombie comedy. So kudos for putting some real heart and emotion into a memorable zombie film. That alone is an incredibly tough thing to accomplish in the sea of undead movies flowing onto the shelves these days! I’m pumped to see what these guys do next, I’d say they’re going to be putting the cheese state on the map of movie making in a big way in the near future….

Dead Weight will be released nationally on DVD and VOD January 21st, 2014. Look for it here soon on Netflix too. Check out the trailer: