Well, Universal Dork has yet another special treat for the loyal followers. Having access to the 2009 San Diego Comic-con allows for a wide variety of things, exclusive movie trailers and previews, TV pilots, Celeb/Creator panels, comics, art, video games, toys…and on and on. But one of the most heralded and timeless aspects of the Comic-con are the attendee’s costumes.

Well, this was my first year attending the Comic-con but the level of participation in donning of costumes met my expectations. So it is with great please that Universal Dork brings you the Best Dressed of San Diego Comic-con 2009. Loyal readers, please keep in mind that approximately 150,000 people were expected at this year’s Comic-con over the course of 4 days, so this is Universal Dorks snippet of the samplings.

Space Marine
Wow, I am not sure how this costume was fabricated, but being a Warhammer 40K fan this Space Marine was tits! Devoted blog watchers, please note this was Thursday (day 1), I saw this gentleman in costume for the next couple days. Weaving his way through thousands of people and moving at a hare faster than a turtles pace. That is what I call dedication! 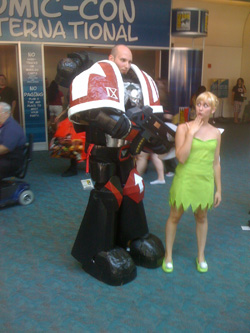 Ghost Buster
Many Halloweens have I witness attempts, but I believe she has really nailed this Ghost Buster ensemble; check out that back pack…nice! 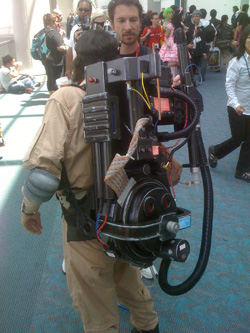 Cylons
These Cylons were on the scene and very shiny, I would guess a buffing prior to the show for sure. They even made the sound!

Astroboy
This one is just creative genius!

Frank the Donnie Darko Bunny
One of the most original and creep, Frank the Bunny from Donnie Darko. I emphasize creepy! When a young boy approached and asked why are you where a rabbit suit, the rabbit replied, “Why are you wearing a kid suit.” As drool dripped out of the mask…yeah, creepy.

Princess Leia
I saw a lot of great Leia costumes, but every male dork out there agrees this is the best of Leia in the movies. (Pardon the blurry photo, iPhones are not designed for photo superiority and I was excited).

Cobra Commander
I am huge GI Joe fan, this Commander was the bomb. And he comes with fries!

Flyer Guy
Realize this one is hard to make out, but this gentleman created his costume on the spot. Slowly over the three days we were on site, he took each and every paper flyer handout and stapled/taped it too himself and made rounds on the exhibition floor.

The Plumber
By far the most original costumer of the entire show and one that represents the working man…the
plumber. Crack anyone? 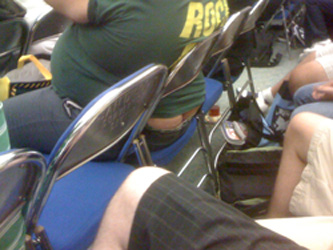