Here’s another pretty neat little creature feature from 1991 I’ve been wanting to see for a while now, well luckily I scored a cool VHS copy of the movie at thrift shop. As I’ve said before my favorite type of horror flick’s a monster movie and that’s exactly what this here is nothing more nothing less. Though released in ’91 it feels like a full on ’80’s movie, with tons of neon, cheezy dialogue and a big savage man in suit Bigfoot type of creature running around the city offing people. Yeah and it also features one of the bad guy henchmen from ‘Die Hard’, Alexander Godunov, who’s the heroic handsome Nordic godly clockmaker monster hunter. 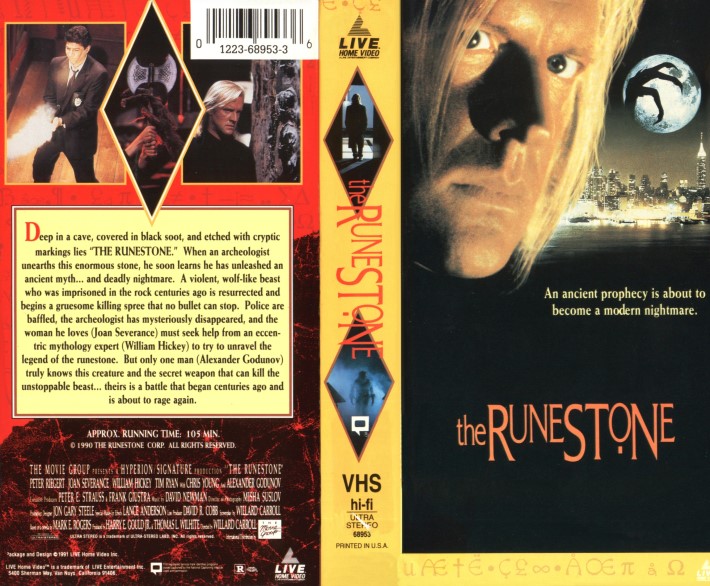 Anyway we’ve got a bunch of fun plot points as a mystic runestone is found in a coal mine in Pennsylvania and transported to NYC, where we all know, the excitement always seems to happen. Soon the runestone displays it’s magic powers and an archeologist becomes possessed by an evil ancient Norse spirit. Of course the dude transforms into a crazed sasquatch called Fenrir that goes on killing spree throughout New York and ends up frequenting art exhibits where over the top yuppies seem to think he’s someone’s hip new art installment. Of course he gets pissed off and wreaks “havoc” in the art community. The creature actually looks kinda cool (some decent animatronics/make up) all things considered and that’s clearly the main draw here with this one. He’s got a sweet no BS attitude and does his best to fuck shit up as much as he can. Way to rep the monsters in the 90’s dude! 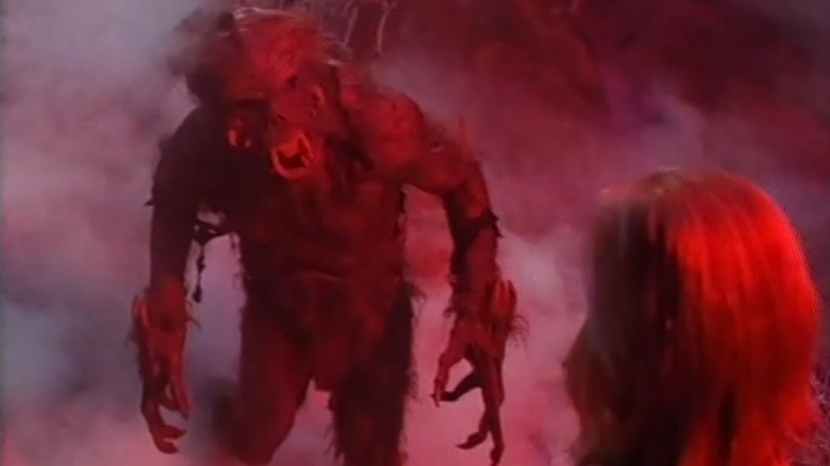 That being said, there’s relatively little gore splattered about and the movie spends probably an extra 20 minutes or so too long trying to create “compelling” character development. Most of the while I just was wondering what the goddamn cranky ass creature was doing? Let’s get back to what he’s up to cuz he’s likely pissed off and freaking people out somewhere in the city! I’d have also loved a bit more of the “Die Hard” dude as well, but sadly he’s not given as much screen time as he deserves until the finale, but damn if the guy doesn’t look like a bad ass when he shows up. I dig the final act as well as the characters face off against the creature briefly entering a different dimension. This one’s often confused with Julian Sands movie ‘Warlock’ from 1989 and feeling surprisingly similar at times it’s understandable why.

There’s plenty of fun to be had here if you’re not expecting a helluva lot from ‘The Runestone’ and you dig low budget late 80’s early 90’s creature cheez. This one’s a prime example of an old school horror movie that if edited down to about 85 minutes would be a total crowd pleaser/cult fave. There’s a ton of total gems out there from the 80’s & 90’s that tried to fill their run time to a more “respectable length” adding too much filler, this one for example at 105 minutes does indeed have areas that drag somewhat, some day perhaps I’ll try and edit a few of these down. Either way there’s definitely some fun to be had regardless and it’s most definitely worth a watch if you’re down for some early 90’s monster business!