Anyone who braves through JIMMY, THE BOY WONDER (the subject of Technicolor Nightmare 1) can theoretically tolerate a little singing and dancing. But where JIMMY is creepy as hell, XUXA is cuter than a sugar turd on a neon birthday cake.

Xuxa Meneghel is a bonafide Brazilian superstar whose fame derives from a series of strange family films in the eighties. Some of my male friends have characterized her as “hot”. This film is the copycat little sister to LABYRINTH.

Super Xuxa, blonde and billowing with butt cleavage in a mini jumper, slathers joy like hair mayo everywhere she goes. The movie begins with her buttering rainbows on graffiti’d alleys and swarming with adoring pre-pubescents. Somehow her urban cleansing campaign isn’t considered vandalism, either.

A silver skinned demon below the sidewalks, who is more akin to tin man than say-tan, steals Xuxa’s beloved stuffed dog to get back at her for being so dang happy. In a singing blonde fury, Xuxa adventures to regain control of her cotton canine. 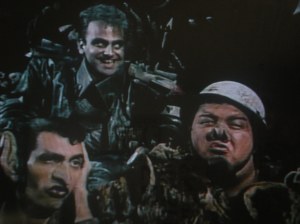 Along her way she encounters talking earthworms, smoking crystals, grandma dressed up like a turtle, a singing pink dolphin, talking trees, hairy man monkeys and a mirrored maze where she reveals way too much of her inner thighs. Everything in this movie dances; trees, flowers and oppressed urban children. The synthed soundtrack is a DJ’s goldmine.

this young turtle is 300 years in age 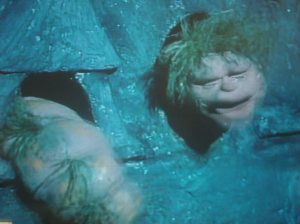 This is actually a political film. There’s awkward’y spliced interludes of real protest footage and obviously, someone thinks Brazil has a graffiti problem. At one point, a viney tree starts throwing books at her. If I spoke Portuguese, I could figure out why. Maybe the message is “stop watching weird kids movies and read a bloody book”.