I love a great 80’s flick and I love it when I see something from the era that’s somehow eluded me throughout the years. So I was pretty stoked to get a copy of 1989’s Blue Vengeance on Blu Ray, a movie I’d never even heard of until recently. How the heck was that possible? Well from what I understand the movie was never given a proper domestic vhs or dvd release back in the day so I’m giving myself a pass for being clueless this time on this one!

That being said, let’s get to it! Ok if you’re a fan of 80’s metal and underground music in general you’re going to immediately find something to love about this movie. Not only is the deranged psychopathic villain a full on metal head, but he’s basically triggered into a serial killing spree of former band members whom he proclaims have “sold out”. I dig his motivation, as I’ve never heard of a slasher with passion for metal ideals like this dude! He seems also totally obsessed with his old band’s song lyrics as well, like they’re the damn holy grail writings of satan himself! He escapes from prison and heads off to NYC to raise some hell and then jam some riffs in his old bedroom at his mom’s place before going on his poser killing spree. Then there’s a cop who’s got PTSD who jumps on the case, leading him to some cool indie hot spots like CBGB’S where punk rock band The Lunachicks are on stage performing was quite a pleasant surprise. 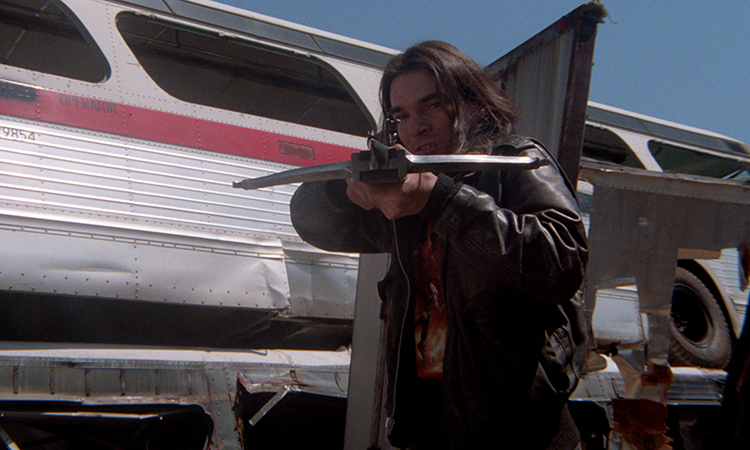 There the cop meets a young female punk who attempts to help him crack the case of the metal maniac killer roaming the streets. Yeah, Blue Vengeance has got some pretty fun and colorful characters at it’s core that bring a certain odd charm to the whole viewing experience. The killer has delusions of being stuck in some midieval fantasy of swords and sorcery that drive his rampage further down a rabid rabbit hole. While the cop and his underage punk rocker sidekick have a sort of weird romantic relationship going on that somehow works without getting too creepy. The movie’s pretty cool on it’s own as a basic low budget 80’s cop thriller with some strong horror themes for most of it’s duration but it really ramps things up in it’s glorious final act. That’s when things go in ultimately ridiculous directions in it’s final showdown and it’s well worth the wait. There’s some surprising moments of gore to behold here as well and some really entertaining dialogue, while none of it can be taken too seriously, I truly admire how surprisingly straight it’s all played. Check this one out, I think it’s on Amazon Prime now and also available on blu ray! A great hidden late 80’s gem!