I’ve noticed a bit of a trend lately in Hollywood that gives me some hope for the future of sci-fi movies, a slight return to intelligent and engaging genre stories have been slowly materializing on the big screen again. Recent movies like Arrival, Get Out and especially Blade Runner: 2049 have seriously made going to the movies a bit of a different experience in the best way possible. A return to cerebral science fiction mysteries is something I’ve been hoping for for quite some time and the trend continues on with the latest, ‘Annihilation’ in a big way.

Annihilation is quite a mind bender indeed that explores a bizarre alien atmosphere that suddenly yet quietly appears down in the Florida Everglades near a lighthouse on the coast. Referred to in the movie as ‘the shimmer’, this truly strange, rapidly growing area creates a surreal glistening layer to the landscape it encompasses. It’s up to a team of scientists/mercenaries to enter inside it to figure out just what the hell is going on and what happened to the previous team that never returned. A great cast heads this one as well, led by Natalie Portman, Jennifer Jason Leigh (it’s nice to see her back!), Gina Rodriguez, Tessa Thompson, Tuva Novotny and also Oscar “Poe Dameron” Isaac in a chilling supporting role. 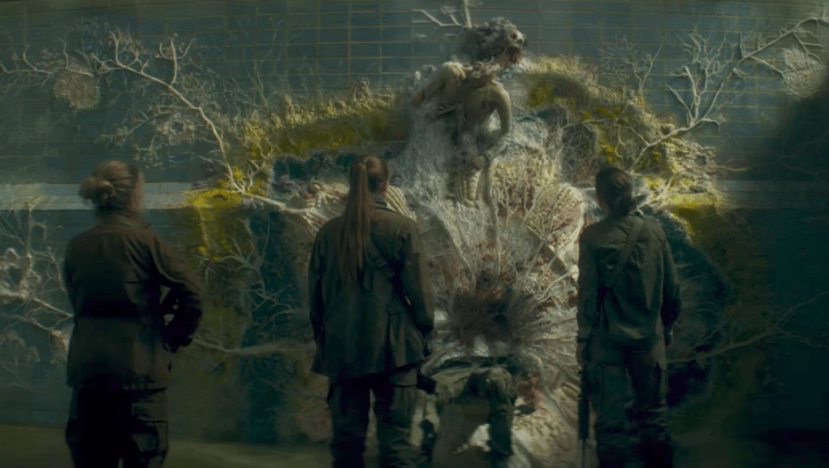 I liked the dynamic of having a fully female team of researchers that enter within the shimmer, as once inside, the movie quickly becomes a full on dream like journey into a beautifully bizarre landscape where it’s uncertain exactly what lies ahead. One of the best things about it is indeed the atmosphere and setting of the Everglades as the shimmer has transformed much of it into an eerie colorful creepy spectacle to behold. It really does feel like you’ve entered into an onscreen fever dream that’s peacefully quiet but at the same time incredibly unsettling.

Of course there’s plenty of danger inside and it doesn’t take too long before shit gets crazy, as quiet and introspective as this movie at first seems it also has some pretty intense scenes that cross fully over into the horror genre. It’s horror elements reminding me a bit at times of ‘Event Horizon’ & ‘The Thing’, there’s plenty to behold inside the shimmer. some unexpected gore and even some genuinely frightening monsters enter the equation. In fact there’s one unforgettably frightening creature that pretty much steals the show and is something born of nightmares. So yeah that’s always a plus for me.

Annihilation leaves a lot of room for discussion once the credits begin to role as it’s finale is so strange it’s likely to leave many leaving the theater scratching their heads. That though I feel is the appeal of a movie like this, it’s got a real story to tell that requires you to pay close attention to detail something a lot of science fiction movies used to do way back when. It seems however that the masses today have a hard time digesting movies like this, most everything today is edited so quickly and largely requires our brains to be turned off almost entirely. Movies these days largely feel as if they’re made for our mega short attention span culture so it certainly feels quite special to enter the theater and be pleasantly surprised by a totally different experience all together. Annihilation like Blade Runner:2049 likely won’t do great at the box office, but if you long for those classic stories of cerebral science fiction they way that I often do, you definitely won’t be disappointed with Annihilation.