I finally got a chance last night to check out the latest Mike Mendez (Big Ass Spider, The Gravedancers) ) horror movie starring none other than one of my fave 80’s action icons Mr. Dolph Lundgren! What we’ve got here is a pretty sweet lil’ horror / action hybrid that’s likely to please any fan of good ol’ Dolph. This one puts Jebidiah Woodley (Lundgren) front and center as grizzled demon hunter who strolls into a small town where a recent string of murders has got the folks in a panic. He tries to convince the local cops that something supernatural is afoot but of course they all just think he’s some crazy ass dude and end up locking him away for a night in jail. They soon figure out though Jebidiah ain’t all that crazy after all as they come face to face with a creepy possessed killer while he’s locked up. Lundgren is quickly freed and leads the police on a bit of a wild goose chase to find the pesky demonic killer. 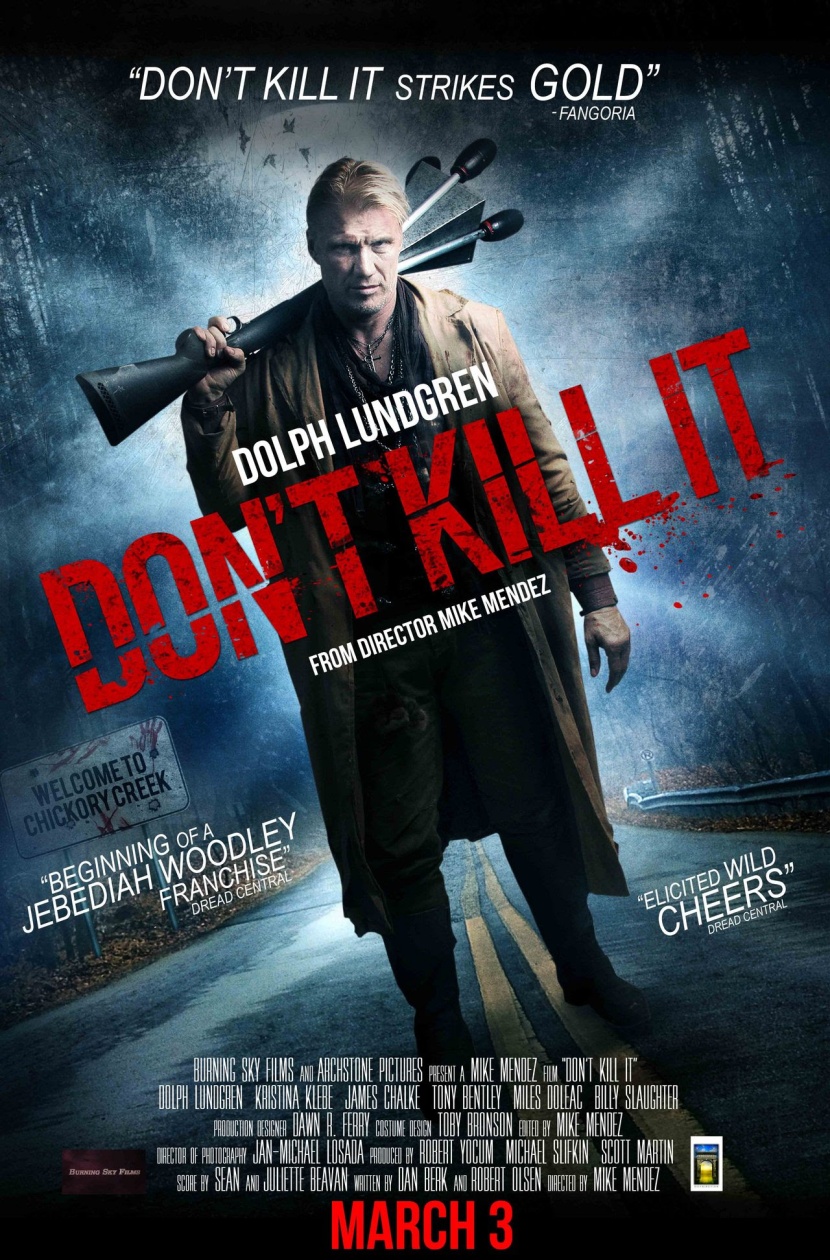 It’s a nice simple plot, short and sweet. The movie’s barely 80 minutes long but packs a fair amount of excitingly gruesome scenes into it’s short run time. ‘Don’t kill It’ is a damn good time, it’s an old fashioned 80’s style movie that borrows a bit from the Denzel Washington/John Goodman horror thriller ‘Fallen’. Heck this one could almost be considered some sort of sequel despite the tonal differences of the two. Lundgren totally shines here and is utilized in exactly the way I hoped he’d be, more like an Ash type anti-hero who cracks his fair share of one liners while thoroughly kicking evil ass. He’s easily the best thing about this one and I’m already hoping that we see him return for a sequel that brings him into the fold of even more insane mayhem. The only real problem is that the movie maybe peaks a little to soon as it’s shining moment takes place about one third of the way through. A town hall meeting gone incredibly wrong becomes an insanely grotesque show of over the top action, comedy & gore.

The rest of the movie is good but it never comes anywhere near the level of ‘cool’ depicted in the town hall segment. It would have played out a lot better if somehow that was the films finale instead. Still the charm of Dolph continues to shine throughout until the very last frame. I’m also pretty pleased with the fx Mendez gave us, some of his movies rely a bit too heavily on shoddy ass CG. This one plays it it pretty straight with, for the most part some inventive practical fx. Still I couldn’t help but want a bit more from the film’s finale, whether it be a full on monstrous demon revealed or a more over the top final battle. It was played pretty safe and I think the movie could have benefitted even more from some creppier make up fx on the look of the possessed people.

I also felt like the film’s finale could’ve been way more effective by being filmed at night rather than during broad daylight. These are really minor gripes as we’ve got Lundgren in one of his best starring roles of his career. I like that Mendez clearly recognizes that he’s an icon and cast him in a role that’s likely to spawn a sequel with fans looking for more adventures of the legendary demon hunter hunter ‘Jebediah Woodley’. If you’re looking for a short, sweet, super fun horror movie that’s not looking to reinvent the wheel but puts a big smile on your face then ‘Don’t Kill It’ will be right up your alley. I’m hoping if we see Dolph return for a sequel the stakes are even higher and demons are even more fierce! This deserves to be the beginning of a cool horror franchise- Check this out!