I was lucky enough to be able to check out the latest 1980’s throwback monster movie ‘The Void’ at the Hollywood Theater here in Portland Oregon last night. I’m pretty fucking stoked that I’m so close to one of the coolest theaters in the country that’s constantly giving us here alternatives to the huge Hollywood blockbusters continuously cranked out. If you’re ever in Portland I highly suggest checking out this place as it always has several incredibly unique events and movies happening there. But I digress, The Void was definitely a thrill to see on the big screen!

I’ve been waiting for this one for quite a while and right now it’s showing all across the country at select theaters. If you’re a fan of classic 1980’s horror flicks like ‘The Thing’, ‘Reanimator’ & ‘Hellraiser’ you’re in for quite a treat. ‘The Void’ captures the look and feel of films like these with ease, similarly creating an incredibly unsettling sense of dread throughout. Seeing it at the particular venue I did intensified the experience, along with the fact I smoked some pot (hey it’s legal here now so get off my back!) before and I felt a little bit like I was transported back to simpler times when horror flicks were at the peak of their charm. It’s story is pretty simple at it’s surface, taking place almost entirely inside a lonely hospital during a graveyard shift. We meet a group of people whose quiet night soon becomes a descent into total madness as the hospital becomes surrounded by a weird ass masked cult dressed in white robes with black triangles displayed upon their hoods.

If that’s not strange enough a seemingly random ultra grotesque murder occurs by a nurse upon a bed ridden patient. That’s not the end of it, when the nurse is quickly shot killed by the local cop (who’s just delivered a strange wounded man to facility), it’s soon revealed that something supernaturally sinister is at play. From the nurses eyes grow a bizarre hulking creature that’s out to finish off anyone still  left inside the hospital. Shit gets crazy fast as the small band of people inside are seemingly trapped by the cult outside and the hungry monster inside. The rest of the movie follows this group as they desperately hold on for survival while trying to piece together just what the holy hell is going on. 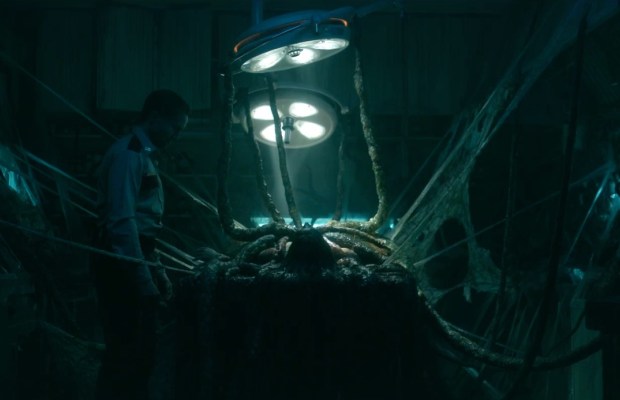 The Void delivers visually on all fronts to near perfection. There’s barely any CGI used in the movie and when it is used it’s also done perfectly. I dig the vibe here of this one as it explores bizarre alternate dimensions and the strange things that can bleed out of them when the conditions are just right. The sense of dread is thick as hell here as well and we’re not given much in the way of comic relief which is actually nice for a change these days to not have everything feel like it’s trying to one up ‘Evil Dead 2’ (that’s nearly never achieved BTW). The monsters of The Void are truly grotesque as well, incorporating some the best modern practical effects in a movie I’ve seen in quite some time. The effects are worth the ticket price alone if you’re in the mood for something that actually looks and feels incredibly realistic in the modern horror genre. There’s plenty of tentacles, slime and just plain nightmarish H.P. Lovecraft-ian horrors to behold here.

Now for what didn’t work, as much as I loved all the creepy ass shit and all those monsters I’ll admit the movie was kinda hard to follow and piece together. I like that we barely know much more than the actual movie’s characters but I also like to have some small idea of what the hells up. In many ways it almost felt like the movie exists merely to boast it’s amazing practical monster effects. That’s great but the movie could have delivered on all cylinders if perhaps the story was a bit more cohesive.

Another gripe I have about all this mayhem are the characters who’re in the midst of it all . They’re all pretty flimsy and hard to really connect to or care about. This was probably the largest flaw here with The Void, we’re not given anyone to really like or root for. There’s relationships I think we’re supposed to care about but they don’t give us much in the way of feeling or heart within it’s cast of  unlikely protagonists. I’d love to see a sequel, but not really because I care about the films survivors, mainly just to see some more crazy ass shit go down. If they do ever continue the story they could hit a full on home run if they develop the characters more and give us reason to want them to survive. I still recommend this one highly for fans of crazy creature features and 80’s horror enthusiasts and give this one a solid ‘B’ only for the reasons mentioned above. Check it out as it out on VOD and all the usual online platforms but if you get the chance go check it on the big screen it’s worth it! Stuart Gordon would be proud…