I’m always on the lookout for forgotten movie gems!! So I revisited a little creature feature called ‘The Kindred’ I’d seen waaaay back in the late 80’s and oddly never heard a peep about since. I came across the image of it’s excellent movie poster online and decided to track it down again. This one to my surprise, is one of those movies that was for some reason only released on VHS, so finding a copy was a little challenge at first. You might be able to check it out on Youtube, but I always try and avoid that if possible because the picture usually ends up a bit more blurry & pixelated. 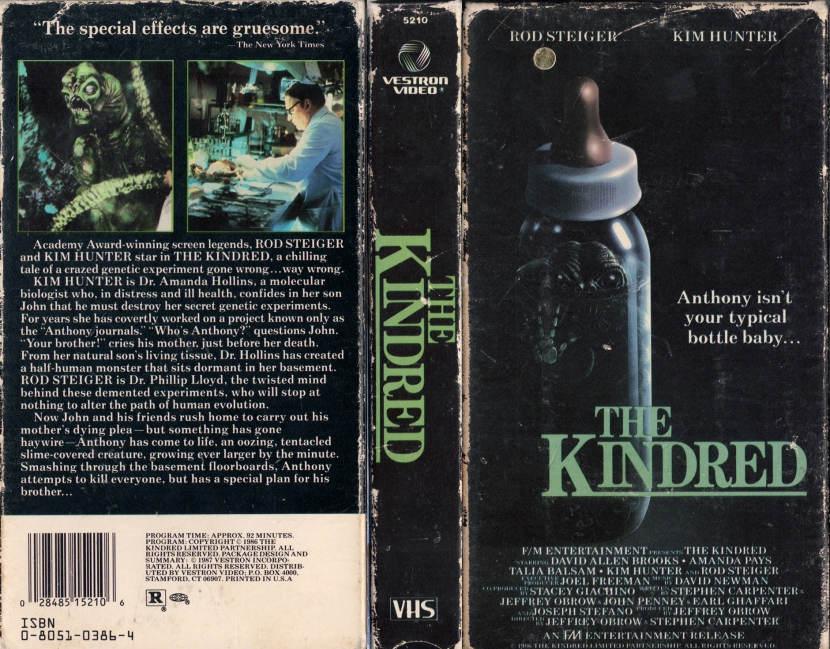 Well turns out that this is a flick that really deserves far more love and could benefit greatly from official “cleaned up” release on dvd as the vhs transfer is pretty dark and muddy at times. But what we’ve got here is one heckuva solid monster movie from 1987 that’s largely influenced by H.P. Lovecraft. By the time I got to watching it I was a bit stoned so the plot was slightly confusing at first. Luckily that didn’t mean shit as the movie starts out with a bang and is full of plenty of awesome gruesome visuals throughout. Swift pacing can be a big problem with a lot of horror movies from the 80’s and The Kindred luckily moves along a pretty brisk pace.

Basically it’s about a guy who discovers upon his mother’s deathbed that he’s got a long lost brother named ‘Anthony’. Only problem is Anthony is small mutant monster who’s living a secluded lab, being experimented on by mad scientists. The guy goes on a quest to solve the mystery of the whereabouts of his ol’ lost bro Anthony and he gets a lot more than he bargains for. Because of course when he finds him it’s not your average family reunion full of hugs and kisses. As the mystery cleverly unfolds it’s clear Anthony isn’t your typical sibling. Nope, things get weird quick, people transform into mutant fish human hybrids and start turning up dead. I really enjoyed how towards the last 30 minutes the movie’s tone shifts & it suddenly becomes a full on “trapped in house with a monster fight for survival”.

Yep, Anthony escapes from the lab and mutates into a giant monster. The movie has got some awesome tentacled monsters, great practical fx work & an surprisingly intriguing story at it’s core. It also moves along without ever becoming a bore and when the shit hits the fan it’s a nice gory action packed spectacle to behold. I’d really love to see a cleaned up version of this movie on dvd to really appreciate the fx work that went into it, hoping Scream Factory or some releases this in the near future, I’ll be down for another viewing! If you love great monster movies of the 1980’s this one definitely worth tracking down!