This sends him into an abusive rage which ends up getting the weird dude fired and sets him on course to our protagonist’s giant castle mansion. Yep the hero of this film is one cool ass nine year old kid who lives in a crazy mansion that’d make Ricky Schroder from Silver Spoons jealous!

The kid sleeps in the cockpit of an old plane with his dog and dresses up in full combat gear like Rambo sporting black war paint! He’s left alone with his grandfather on Christmas eve night and that’s when the shit hits the fan as the crazy raging dude still in his department store Santa suit decides to break in, coming down the chimney and murdering the boys beloved dog right in front of him.

The only problem is this mansion is huge, I mean HUGE and this kid knows his way around and then some. The rest of the movie is a great horror thriller and one thing that makes it so awesome is the setting, the mansion has a strange dreamlike quality to it. Besides being so big it’s got secret doors, an odd maze like art section, 80’s video games, suits of armor, trap doors and a gigantic secret room/cavern with a rickety bridge that crosses over hundreds of toys.

The kid too is quite a character himself, he’s a bit of computer wiz, a car mechanic and expert trap setter and unlike most horror movies this little guy is smart meticulously planning his every move with caution. The movie has got heart too with likable characters, a frightening villain and some excellent visuals. It’s a strange hybrid like taking the humor out of “Home Alone” and mixing it with “Silent Night Deadly Night”, “The Toy”, “Commando” and “The Shining”. It’s got the heart of an Amblin movie but much more dangerous at it’s core. Most definitely hunt this one down for next Christmas it’s awesome!!!

Howl is a 2015 werewolf flick by Paul Hyatt who’s better known as the effects guy behind the Neil Marshall movies “The Descent”, “Doomsday” and “Dog Soldiers”. So I had high hopes for this one. Dog Soldiers is easily one of the best werewolf movies of all time and The Descent is one of the best horror flicks of the last 20 years. Howl however didn’t quite measure up to either of those unfortunately. It was a solid attempt though and the first werewolf movie I’d ever seen that was set on a train. This tale follows a group of people on a late night trip whose train breaks down in the middle of the countryside. As they decide to walk to the next nearby city they quickly find out that something is in the woods that’s got them on the menu for a late night snack. It’s really your basic tale of survival, with clashing personalities in a time of danger.

The movie honestly doesn’t have anything bad going for it. It’s well acted, well shot and spends a good amount of time (if maybe a tad too much) on character development. It’s got some great scenes as well with these werewolves that remind me a bit of all things, Michael Jackson’s “Thriller” video. I mean that in the best way possible. Paul Hyatt does a great Job with the visual fx and the creatures look great, more man than wolf this time around and most of these cool fx are done practically. But when all is said and done it lacks the punch of movies like Dog Soldiers or even the last good werewolf flick “Late Phases” had going for it. 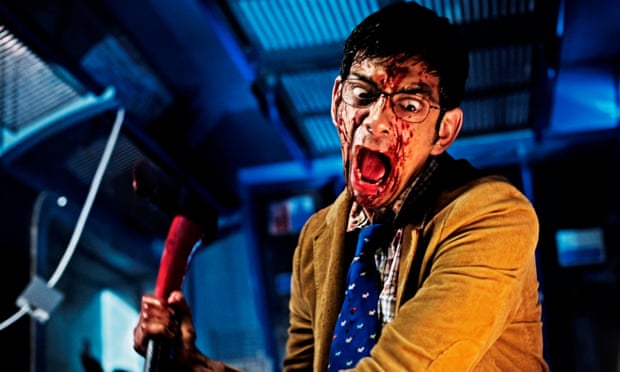 The movie actually starts out strong with the first werewolf reveal/attack sequence being way more visually intense than anything that follows. That being said I do recommend Howl for any werewolf movie enthusiasts as it’s got enough going for it in the way of creature fx to warrant a watch.