Just the other evening I decided to watch “The Little Shop of Horrors” a movie I haven’t seen since the 1980’s and boy was it a treat to behold! I remember I saw this movie in the theaters when it came out in 1986, my mom was cool enough to take me! I had fond memories of the movie as a kid and for some reason hadn’t revisited it in it’s entirety since. Well low and behold this movie was even better now than it was back then! If you’ve not seen this flick I highly recommend you check it out, it’s one of the few musicals that I actually truly love and it’s a remake that’s light years better than the original!

For one I had totally forgotten it had amazing cameos by Steve Martin AND Bill Murray, and their parts in the movie are simply hilarious. It also reminded me that Rick Moranis starred in some amazing 1980’s films I hold dear to my heart like Honey I Shrunk The Kids, Ghostbusters and  Strange Brew. It’s a shame we haven’t seen Moranis in a movie since 1996! I’ve heard rumors he may appear in Ghostbusters 3 though(that is if the movie ever really gets made). 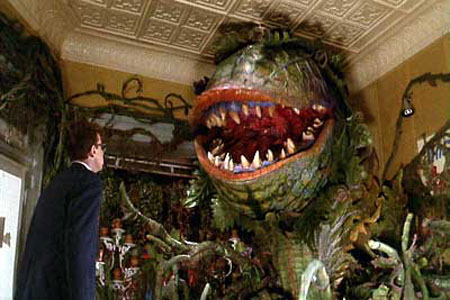 What had amazed me most though was “Audrey 2” the carnivorous talking alien flytrap! It was amazing to see this movie monster come to life once again. It’s easily one of the coolest movie monsters I’ve ever seen and in the special features we see just how complex it was to bring it to life for the camera. How they created this creature’s mouth movements was beyond amazing. It wasn’t just a simple puppet. As Audrey 2 grows even larger and becomes more hungry the effects become even more incredible. By the finale of the movie it’s a hulking behemoth that’s a pure wonder to observe. Everything about the movie blew me away, from the sets, to the effects, to it’s awesome songs and it’s charming wit. This film has aged incredibly well, do yourself a favor and check it out again and if you’ve never seen it you’re missing out big time on some 80’s gold!

Oh yeah and the Dentist song is amazing still-they don’t make em’ like this anymore!