Today I just watched an exclusive tralier to the upcoming horror comedy The Last Lovecraft: The Relic of Cthulu at Bloody Disgusting and it looks awesome! I recently did blog about Tucker and Dale vs. Evil predicting that it would be the best horror comedy of 2010. After seeing this new trailer it looks like Tucker and Dale may have new competition! It looks like an epic horror adventure with some unlikely heroes done the right way. The story itself is pretty clever as well.  Here’s the synopsis that’s been released:

“In the film Jeff, a down on his luck office worker, finds out he is the last living relative of horror novelist H.P. Lovecraft. What he doesn’t know is that Lovecraft’s monsters are real and will soon threaten the very existence of mankind. Jeff and his best friend Charlie are forced to embark on a perilous adventure and they enlist the help of high school acquaintance, Paul, a self proclaimed Lovecraft specialist. Together the three unlikely heroes must protect an alien relic and prevent the release of an ancient evil, known as Cthulhu.” 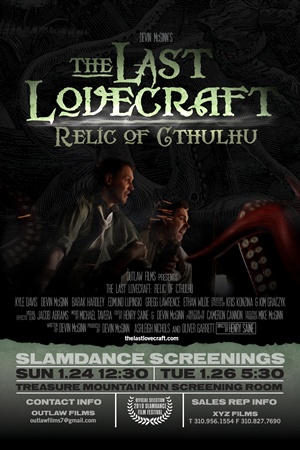