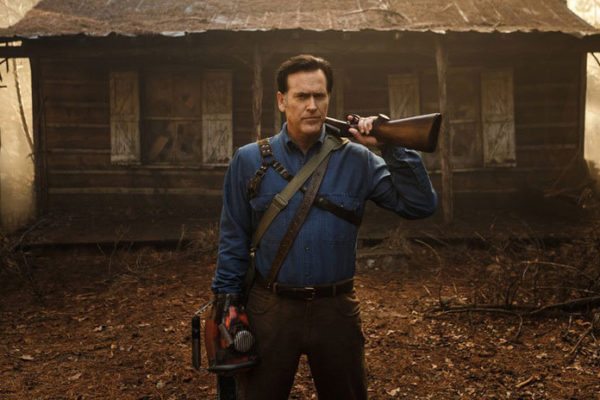 Aside from people pirating the show and being a bunch of cheap skate Evil Dead fans I’d say there’s a couple issues at hand that might have led to it’s demise (the show being on Starz honestly was a problem from the start-because who the hell has Starz to begin with?). The good was we had Bruce back wisecracking his way in and out of every episode. We had a ton of old school 80’s inspired gore galore & it seemed that perhaps was all that fans needed to keep interested in the series. But perhaps that’s not quite the case? If I look at it critically, even though I adore the show and really didn’t expect much more than what we got there’s a few things I think may have hindered it’s success. I’m not sure first of all that the story presented throughout the three seasons was really interesting enough to keep most on board for THREE full seasons. At a half hour each in length that’s a lot of slapstick horror for most people & one season may have been just enough? Not for me..

I think season one was pretty damn solid, the horror was played a lot more straight and Ash was more or less the only one who was ridiculously over the top. That seemed to change though with each season and the other characters along with horror of things began to feel almost entirely comedic. Season two and three started to feel at times as if they were recycling situations we’d seen before from the first season, even repeating similar plots. Someone reads from the Necronomicon in the first episode of said season and we do it all over again. These rehashed plot lines did bother me a bit, Ash and his gang went back to the original cabin at the end of season one & two and how many times do we wanna see Ash fight a doppleganger of himself really now? 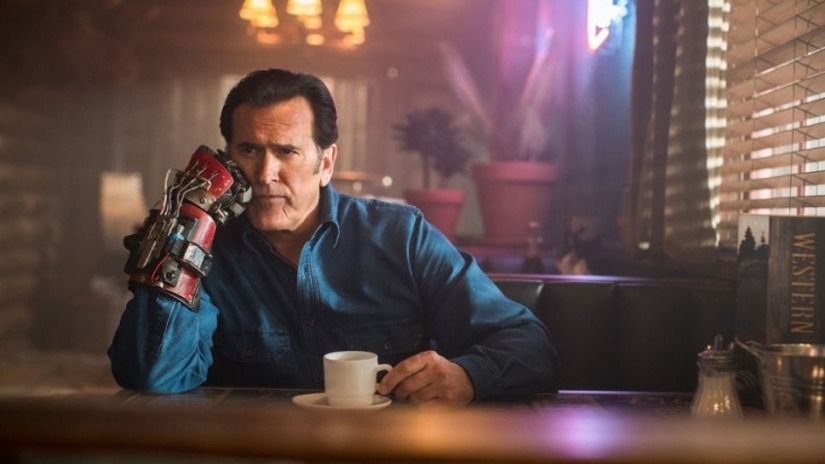 The story for both the second and third seasons should have been drastically different. I wasn’t too thrilled with season three again taking place in Ash’s hometown, that being said I really dig season 3 still-it’s so much fun and the fx work is stunning! Still though it should have seen the crew maybe traveling back to the ‘Army of Darkness’ setting or even pitting Ash against an entirely new evil threat.  And as much as I love Lucy Lawless I think 3 seasons of her as the villain has gotten a bit stale. Point being new ideas each season aside of the “necronomicon being read” should have been utilized to give us Ash facing off against mysterious new things we’re not so familiar with. I was hoping that season 4 would bring us just that.

Next as much as I love Ash and his giant ridiculous ego at times the character should have shown a bit more human emotion on screen. The problem with a long series with Ash is that if he doesn’t grow as a character or show real emotion every now and again people begin to feel like the dude can do anything with no real consequences. This current season did indeed bring a side of Ash we’d never seen before in episode 8 but at this point it I feel it was for many maybe too little too late. We want to know that Ash is afraid sometimes and that he does indeed care about others & for most of the 3 seasons he stays pretty one dimensional and that can seriously suck the drama out of any lengthy series.

Aside from these issues the show pretty much delivers EVERYTHING you want from an ‘Evil Dead’ series. Ash in the movies never strayed far into any real drama & Bruce is amazing in his role of Ash in his older years indeed staying true to “movie Ash”. The special effects were damn impressive, at times they used CG blood a bit to much, but I think season 3 really goes the distance to bring that old school 80’s horror straight into 2018. The sets and atmosphere are also amazing, just as good as most modern day bigtime hollywood movies if not better at times and some of the monsters brought to life were fucking incredible. Hats off as well to the show’s comedy, I really dig that Ash can be Ash in 2018, offensive as hell just like in the movies. With all this being said perhaps it’s a good thing the show is coming to an end in the next week, to quit while we’re ahead. Lets face it the fact that ‘The Walking Dead’ is still going at this point is a miracle, that shit’s gotten stale as hell and should have ended a while ago. 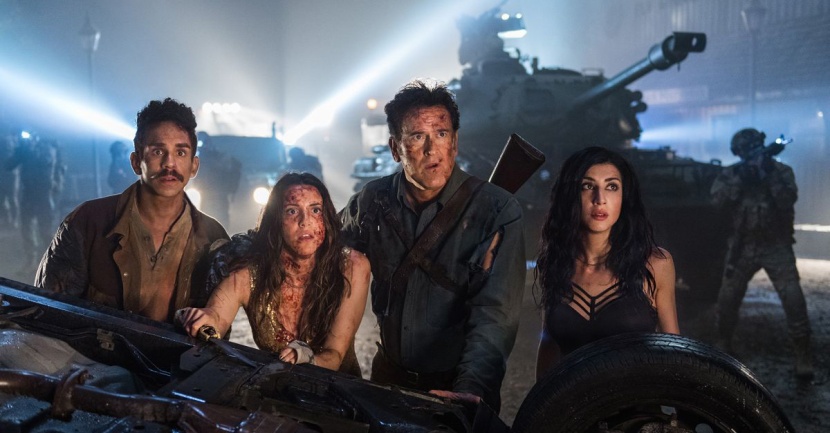 My hope is maybe, just maybe, Netflix will pick up Ash vs Evil Dead for a fourth season as they’ve had the first two seasons streaming for quite a while, if they do a season 4, I hope they give us something different for Ash and the gang, I am always game for more! If there is no future for the character I’ve gotta say I feel a bit sad saying goodbye to Ash, I really wish he would have been a hit and was here to stay….