Hellboy 3 has from nowhere, suddenly become a real possibility and I’m pretty damn excited about it! I’ve been ranting about getting a third movie made here for a long ass time and with Guillermo del Toro’s recent fan fueled poll bringing the movie back into the limelight it seems it now has a real chance of happening. The movie has been talked about now for almost a decade and because it didn’t make a killing at the box office, making a third movie has been a tough sell for those big greedy Hollywood Studios. Over the years however the popularity of the unique oddball superhero franchise and comic book have gained quite a bigger following than they had back in 2008. So it could it finally be time for Hellboy to get the praise he deserves? I’d certainly say so!

For me the comic book series and all of it’s offshoot titles that Mike Mignola has produced over the years remain to me the most solid superhero comics of the past decade. Though the movies and the Hellboy comic series differ in many ways, mainly in terms of comedy, I think the movies did a great job delivering the heroic demon to the masses. The characters look absolutely amazing and del Torro is likely the one responsible for that. Ron Perlman fits the part like no other could and the rest of the crew like Abe Sapien, Johann Krauss & Liz Sherman couldn’t be represented any better in my opinion. The movies perhaps give us a bit of a lighter side of things than what you will see in the comics and added some romance into the story (which I actually kind of like as the Mignola comics rarely touch on that aspect of things) while visually making the seemingly impossible come vibrantly to life. I don’t think there’s a director I would have trusted more with Hellboy. 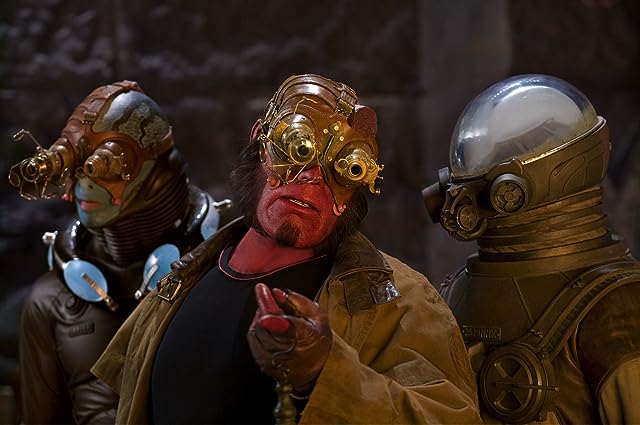 I think however Hellboy as a movie franchise was a bit ahead of it’s time. I’m not sure people were ready for it as the characters were as incredibly strange as the stories brought to the screen. Today though things are a bit different, I think Guillermo’s vision fits quite nicely along side of the success of Doctor Strange, which I think kind of shows people are tiring a bit of the Hollywood superhero movie mold. I think people might actually be ready for the utterly bizarre tales of Hellboy and The B.P.R.D. & it all makes me wonder if this does happen, will the third movie be really be the final act? It sounded like the plan thus far was to have the third film make Hellboy face his demonic destiny of bringing Hell on earth. I guess it would be closure to a trilogy, and heck Perlman is now 66 years old but there are so damn many incredible Hellboy adventures to explore it seems a shame to bring the character to his final arc in just three movies.

Perhaps if this is the end of the character’s movie run we might get some spinoff movies featuring the further adventures of The B.P.R.D. like we do in the comic books? Or even a B.P.R.D. Netflix series?! Or perhaps a younger recast Hellboy heading out for his earliest adventures in the 1950’s? Whatever the case I’m crossing my fingers that this third movie happens, if it does well then obviously there will be more. I’d love to see some more of the weirdo agents of the B.P.R.D. come to life in Hellboy 3. Bring on characters like Panya the mummy, Roger the homunculus, Captain Ben Diamo the were jaguar, Kate Corrigan, the psychic Fenix Espejo and her rottweiler and please find a way to introduce Lobster Johnson dammit – that dude deserves some movies of his own! I’m thinking this time it’s gonna happen and I can’t wait to see what they come up with – I’m totally all about more non-Marvel & DC superhero flicks!!