It was finally time to check out a sequel for one of my fave horror movies of all time, The Hitcher! Yep, what many people don’t know is that they did indeed make a sequel for the 1986 classic. No, this ain’t a sequel to the highly un-needed  2007 remake. “The Hitcher 2: I’ve Been Waiting” came out in 2003, yeah it took me ten years to finally become curious enough in this movie to check it out. Perhaps this sudden interest came in a recent conversation about the films villain, played by none other than Jake Busey. 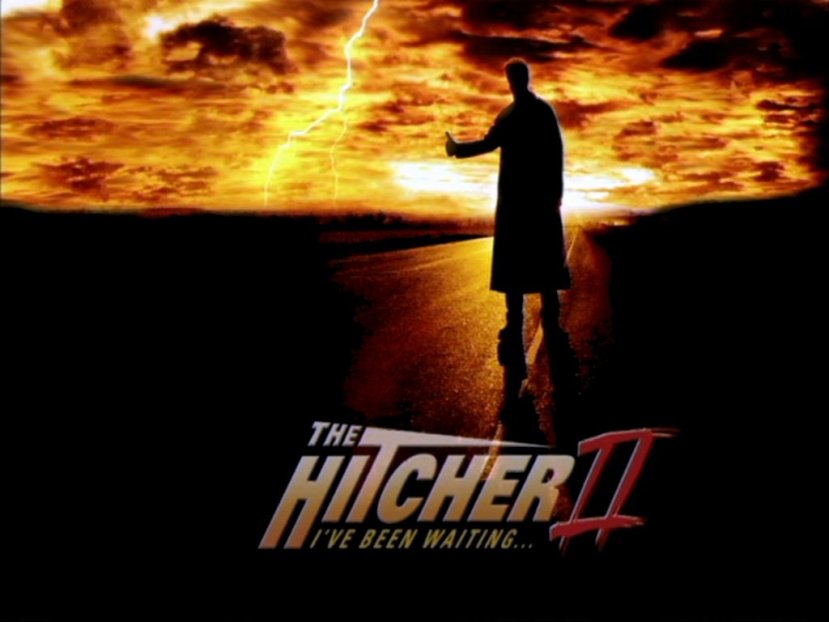 So some might think, a sequel for The Hitcher might just be about some random folks who pick up another crazed hitchhiker. Well what kind of sequel would that really be?! Nope! This one succeeds on one level, by bringing C. Thomas Howell, the original’s hero, Jim Halsey back! Now that’s what I like to see in a sequel, the original star power return. However cool this seems it makes you wonder how in holy hell Jim Halsey could realistically ever pick up another hitchhiker after the crazy shit that went down in the original?!!

To me, it didn’t really matter at first because it was just pretty cool seeing him onscreen 17 years later, as the same character and seeing just what the hell that character was up to. Turns out he was a cop, he flies planes and he’s a little crazy. Rightfully so! Halsey has been struggling still with those visions of the events of the original film shown in flashbacks throughout. He’s wound so tight that he decides to go on a road trip with his girlfriend, flying there in his plane and then picking up a car to drive down that same highway Rutger Hauer terrorized him on in 1986! 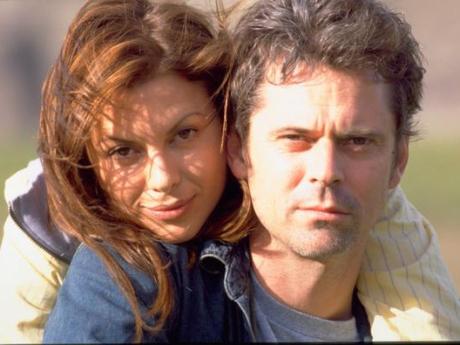 Sounds good thus far right? Well things get real stupid REAL quick folks. Yep it doesn’t take long before they see a man crash his motorcycle and then jump onto the side of the road……..yeah….hitchhiking!!! Now there’s no WAY Halsey would ever pick up another one of these guys right?! WRONG! His girlfriend talks him into it and there you have it, motherfuckin’ Jake Busey and his big ass teeth sitting in the back seat of the car. BAD bad news. Now what are the god damn chances that the one hitchhiker Jim Halsey sees after driving the damn car for like 15 minutes down the road would be a god damn psychotic serial killer?!! Apparently Halsey is a hitchhiking serial killer magnet! The sheer absurdity of this damn story line is almost brilliant! This movie is just so damn stupid I couldn’t turn the shit off! 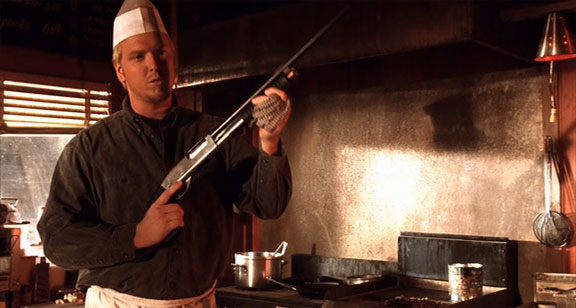 Let me make this point clear as day Jake Busey is most certainly NOT Rutger Hauer!! Busey’s attempt at recreating Hauer’s intensity is laughable at best. He gives a ton of lame ass one liners every chance he gets and comes across as an incredibly irritating nitwit rather than remotely frightening. When Hauer was in the car it made you cringe, but when Busey’s in the back seat you just wanna slap the shit out of him for acting like such a nimrod. 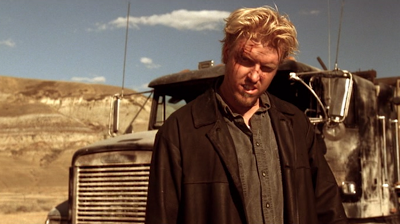 So what follows really is pretty forgettable. It’s kinda the same plot as the first one, with maybe one unexpected event to keep it mildly disappointingly interesting. Hell Busey even uses the whole “finger in the french fries” schtick in this one too as each and every turn of the film ends up with some moronic dialogue with Busey somehow convincing the cops he’s just an innocent bystander. Perhaps they just thought he was mentally challenged? Oh yeah and let’s not forget they throw in the “roped to the semi” shit again too. But as with most everything this film delivers it never amounts to anything remotely interesting just to more shitty dialogue from the oh so “crazy” Busey. I’d say this one is a full on grade A suck fest and the only reason to check this out is to see C. Thomas Howell as Jim Halsey one last time. If you’re a fan of moronic sequels that fail miserably this one is a MUST see!!!