Yes! I just discovered that Baywatch Nights season two is all on Youtube! So I’ve recently been re-watching some of this stuff and it’s awesome! See what some people don’t remember is that when Baywatch Nights started out it was just a spin-off of the original show with Mitch Buchannon (Hasslehoff) continuing his beach front patrol into the late night, BUT when the ratings dropped after the first season the Hoff wanted to jump on the bandwagon of the success of the X-Files! 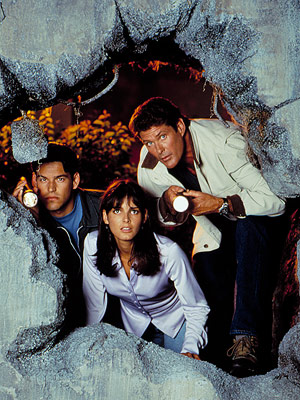 So what happened in season two? Suddenly the Baywatch universe was jam packed with the ridiculous supernatural creatures with only one man who could get to the bottom of shit-you guessed it The Hoff!

Still playing the same character! A lot of people never even knew this happened, they were too damn busy watching the X-files…so now I figured was as good a time as any to see what the hell I missed back in the day. Well it seems I missed a LOT! If you got some time to kill and brews to drink check out some of these-here’s a good one “Frozen out of Time” where Hasselhoff hunts down two real life vikings who’ve been thawed from the ice and storm the waterfront beating up local fisherman with their catches of the day-CLASSIC!!