This last Friday night I had myself a little movie night by myself, real exciting beginning to a weekend huh? Well that’s the life of a dork sometimes I guess. But honestly it could have been a total bust as I have learned many times as I am constantly taking chances on movies trying to find the hidden gems of yesteryear. Usually I end up with some total crap ass movies-the kind that aren’t even good in a bad way, but this time little did I know I was in for a treat!

Well my double feature started out pretty good with 1994’s Brainscan, starring Edward Furlong. This one turned out to be a pretty fun little movie where Furlong orders a new state of the art interactive “video game” from Fangoria magazine and it ends up subliminally turning him into a vicious killer. It also introduces one of the lameest movie monster villains I’ve seen in quite some time, the amazingly not scary at all “Trickster”.

This jerk off is about on par with The Wishmaster if you get my drift. Still it was a decent movie despite some really shitty 1994 CG.

The next movie however was the real deal, Sean “Friday the 13th” Cunningham’s movie “The New Kids” was a real treat all the way back from 1985.

I always ask myself why the hell did I first see this in 2012?! Well as I also have said before there’s nothing quite as satisfying as seeing a rad 80’s movie for the first time so late in the game. This one was like a much darker version of “The Karate Kid” which unfortunately came first, as I at first suspected that perhaps it was a rip off of The New Kids.

Anyway what we got here is one hell of a fun movie, with one of the corniest opening scenes I’ve ever seen. The movie follows two teenage siblings (Abby & Loren), who having been raised as bad asses on a military base lose their parents in a car crash. Soon thereafter their zany Aunt & Uncle invite them to live with them down in Florida where they run a cool little amusement park. I mean really how rad would that be?! I mean if your parents are both going to pass away at least you get to live some place totally awesome like in an amusment park?!

Well now unfortunately luck is still not on the brother and sister’s side when they head off to the local high school and meet a bunch of deranged red necks lead by a criminally insane James Spader!!! 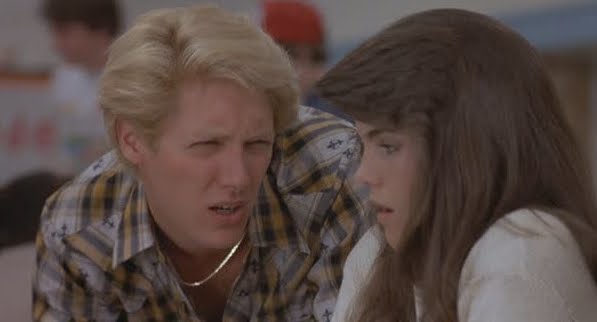 Yeah Johnny from the Karate Kid has got nothin’ on this dude! Spader’s character “Eddie Dutra” sets his pervy eyes on Abby and simply won’t take no for an answer. When he gets rejected in a very comically awkward “gas station” scene he decides to make both their lives a living hell. He and his asinine hillbilly buddies go on a rampage, trashing the amusement park, keying their uncles fancy classic car, kicking Loren’s ass in the bathroom, finally kidnapping Abby, trying to rape her, set her on fire with gasoline and having their vicious pitbull attack her! Yeah Spader is pretty funny and quite awesome as the villain in this one. However one thing they didn’t suspect was that these two kids are total bad asses and were trained by their father while on the military base! That’s where the fun starts at the final showdown at of course……the amusement park!! I gotta say it’s a good one too and let’s just say those douche bags get what’s coming to them, still the movie somehow finds a way to wrap things up on a sunny 80’s style note and even leaves it open for a sequel! Check this out if you’re craving a totally rad 1980’s teenage revenge flick! It won’t disappoint!