So it’s come to that time of the year again where everyone is making their top ten lists of 2009. Being a huge fan of horror movies I only thought it right to once again count the best of this last year. This last year personally seemed a little lighter on the real good ones than 2008. But there were still some pretty damn great flicks that delivered the shivers. 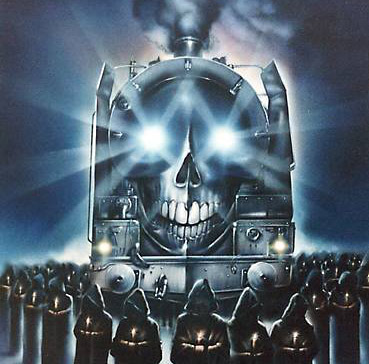 This list is comprised of movies released in the theater or released on dvd this last year that I personally saw. So let’s get down to business!

Martyrs is a horror movie I wouldn’t recommend to anyone and it’s honestly the type of movie I try and steer clear of. It’s one of those movies that’s so well done and disturbing that it sticks with you for days after viewing it. In fact I think I had trouble getting to sleep after viewing it. It’s definitely not your typical horror movie and in a sense feels like three almost independent movies packed into one with the same character. Parts are very hard to watch and some I almost had to fast forward through some of it, something I rarely even consider doing. This one is definitely for those who want a challenge and an ending that will open up hours of discussion. Don’t say I didn’t warn you though…

Nazi zombies attacking people camped out in a cabin? What’s not to like here? This horror comedy was a fun watch and not to be taken too seriously. Filled with awesome looking zombies and tons of gore this was definitely not the most intelligent horror movie of 2009. However it was one of the most fun!

Hush was a great horror thriller that really made you question yourself and just how courageous you might be in a similar situation. How far would you go to help someone you don’t know? How far then would you go to help someone you love? This movie’s creepy as hell and it’s pretty much a nonstop thrill ride (literally) from the moment the movie starts. If you want to get your adrenaline really pumping check this one out! It will put new fear into late night highway driving and stopping for a snickers at rest stops…

Do I really need to say anything about why this one made my top ten? Tons of fun, action, and the insanely brilliant cameo by Bill Murray alone sealed it’s place here instantly. Sequel please!

Yeah finally Sam Raimi returns to horror! I enjoyed this movie a great deal and often wonder why Raimi chose to make this rather than Evil Dead 4? This easily could have been used as the basis for a fourth installment. This was a great popcorn movie and felt like something Raimi could have put out in the 80’s. The only reason this movie didn’t make it to my number one spot honestly was the choice of some absolutely terrible CG used in this film. Maybe it’s better then that Sam is waiting it out Evil Dead 4!

Ok so this movie really wasn’t that great. I get it. But if you saw it in the theater it was god damn amazing! Kinda like going to Disneyland or something. This was easily one of the MOST fun movies I’ve ever seen in a theater. Easily the best of the string of 3-D movies in 2009. This one obviously was made to only be a 3-D horror movie. I watched it at home later with the glasses from the video store and it was pretty sub par.Definitely made for a theater, so if you missed it then you missed out big time!

What can I say about Orphan other than finally someone gets the killer kid genre right! Finally an evil little kid that’s truly a menacing villain. Step aside “Good Son” or the Orphan will kick your ass to the moon! Things get incredibly creepy with the films star Ester in more ways than you can imagine. Though the movie “The Children” almost made my list, and was indeed another killer kid movie done right, but this one wins hand down for the lead’s acting alone. This one delivered the chills, thrills and awesome unforeseen twist.

I will say my top three movies easily could all be interchangeable with each other for the number one spot. So keep that in mind. We have talked quite a bit about Trick ‘r Treat on the site so it’s no wonder this made it to nearly the top. Why this didn’t make it to the big screen is a mystery and a damn shame! This movie brought back the horror anthology the right way! This could be the best Halloween themed horror film of all time. What you’ll find here is old school horror, no CG b.s. and four awesome tales of terror interwoven into one excellent movie. The climax of this movie is brilliant and show’s you that good old fashioned horror is always the most fun…

Technically this one was released in 2008 in a very limited theatrical release. Thankfully it made it onto dvd though in 2009 where I eventually saw it. I am a huge fan of a well done creature feature and this one was done right. With one of the coolest concepts for a monster I have ever seen this one turns up the stress level all the way. Reminding me a bit of John Carpenter’s “The Thing”, I only wish I could have gotten a better look at the spiny monster. However sometimes the best things are actually letting your imagination fill in the gaps. The best monster movie of 2009…

Some people I am sure are going to disagree with me on my number one choice but really I thought that this movie was simply brilliant horror movie making. From the moment it started I was completely sucked in and almost the entire movie takes place in only one room! This film had me on the edge of my seat and at certain points nearly pissing my pants. I have said it’s almost best to go into this one without really knowing the plot or reading the back of the dvd. It’s one of the strangest concepts of a horror film, one of the best acted of 2009 and one that will have you thinking for days after seeing it…

Honorable mention : End Of the Line, The Children, Shuttle, Deadgirl