So this is pretty simple, but Universal Dork would really like your opinion. When it comes to Transformers, it is great to see the universe refreshed cause the comics and cartoon were just a staple of our youth. But I think all old schoolers agree that the movies just sucked; same situation as high cost sci-fi cartoon-based movies…great FX and cinematography, but terrible writing, plot, character development, casting, etc. (you know, all those other pesky movie making skills).

A natural byproduct of the movie, you have a refresh of characters due to artistic integrity and pending popularity an eventual toy line. So when I heard Transformers 2: Revenge of the Fallen was going to feature classic characters like Jetfire and Devastator…I was pretty excited. Let’s face it, how could you screw up some awesomely powerful transformers like these two? Wow, I continue to be pretty naïve in my trust of Hollywood nowadays. Read on for more information.

Even if you just straight out copied the classic designs, that would be awesome…well reality bites, right. And we just have to start calling out some of these “professionals” in the industry. You know, the professionals that are probably 20 years old and have no deep rooted love of the classic characters. I mean, how could you not do just a smitten of research on these characters and make a reasonable attempt at recreating them.

So first on the chopping block Jetfire (a.k.a Skyfire) – It was no secret that the original Marvel comic and cartoon just took the design of Jetfire straight from Robotech. They did not even make an attempt at a cover up since the toy clearly transformed and was exactly like a Veritech fighter. But that was ok since you could use your Jetfire in dual purpose play. I am sure that Hasbro just bought the toy molds straight form Bandai to make this simple and cheap. I loved using my Jetfire in Guardian (GERWALK) mode.

Then Transformers 2 comes out and I see their idea of Jetfire…wow, shit…and old school geriatric robot, WTF? I mean, how much more can you slap this character in the face. At least they made up for it a bit and had his transformed state be the SR-71 Blackbird, not much saving grace unfortunately. Here are the two designs side by side. 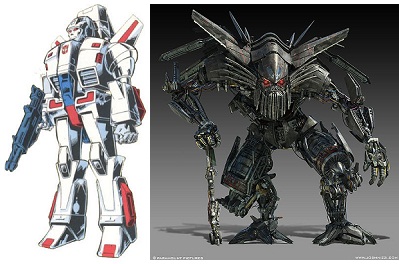 Now lets compare the toys..original is fantastic! The new one…is that a jet on the robots back, are those hips? Oh, I see he comes with a cane like the movie. That’s good, we don’t want the old robot to fall over while walking somewhere…oh wait, he is a jet…HE DOESN’T HAVE TO WALK ANYWHERE! 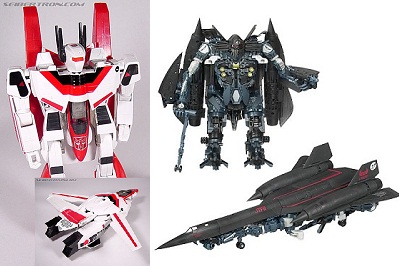 Hmmmmm…pretty clear, old school wins. New style is trash and the creators should be ashamed of themselves. I mean shit, here is a fan design that was floating around the web…give this guy the character design job Michael Bay! 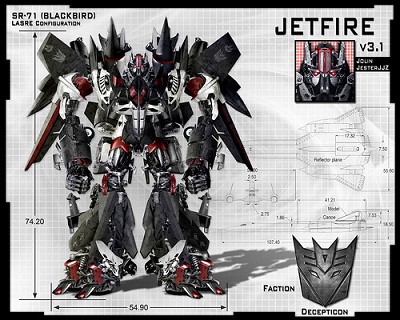 Next there is Devastator. Formed from the tight team of six Constructicons, Devastator was the coolest concept when we were kids. The first time I saw the Constructicons form up into Devastator…well, I had an accident that still stains me to this day. Despite his lumbering stupidity on the cartoon, Devastator was an excellent choice of names as that is what he did best!

Then the movie is coming up and I hear rumors about Devastator and I get worried/excited. And to be honest, the movie version of Devastator was not too bad, it was very cool. Following the lumbering aspects, they made Devastator more beastly…but compared to Jetfire, they at least followed the original idea of Constructicons forming up to make the giant robot foe. I am quite surprised they did not make him transform from six faggy single engined Cessna. So hear they are side by side, what do you think? 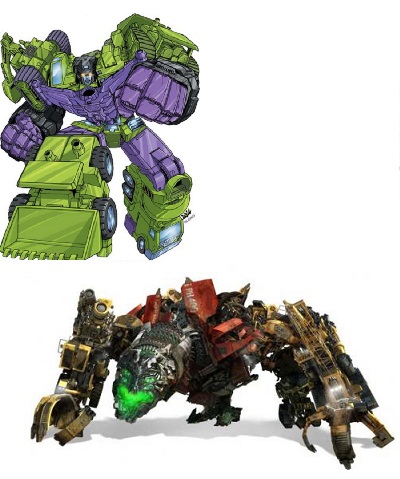 And for the toy comparison…wow, Hasbro blew it on this one. I mean come on. What is that new toy suppose to be. It looks like one of those guys at the gym that is there all the time and is all upper body. What a joke! 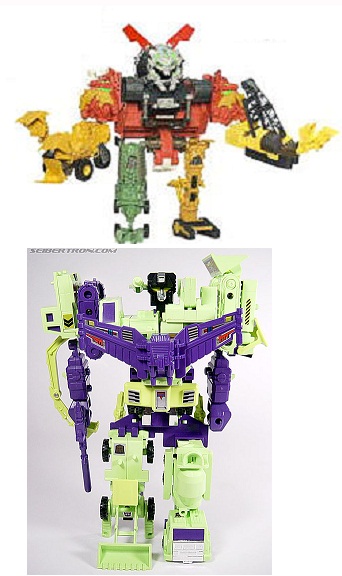 So based on this, I would have to give the clear win to the original design, I mean if you can’t manage par, shit you nothing.

Please, come on out and let us know what you think. We would love to hear how douche you thought the new movie was and how a three legged pig with failing kidneys could do better character design.