So a couple nights ago I saw a movie that quite simply blew my mind! It’s rare to find a movie that can keep me interested when I start it after 1 am. Usually 30 minutes into it I’m out like a light. NOT the case with “Pontypool”, which is the name of where this movie takes place. It’s been tagged as a zombie movie, which made me at first a little reluctant to rent this new release. I mean really, do we need another zombie movie at this point? Well I am happy to say that it was much more than a zombie flick. 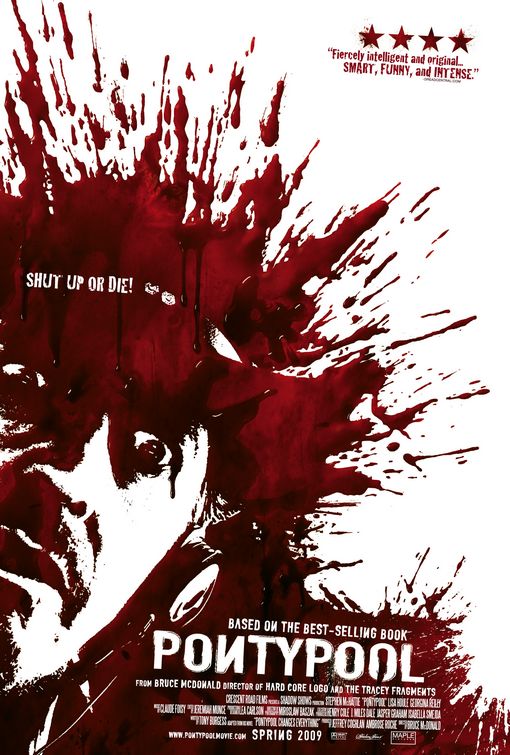 The movies plot is quite simple. Hot shot talk radio host Grant Mazzy, who previously worked in the big city, relocates to a smaller town and takes a job at a radio station there. The city of Pontypool in Canada is hit hard by a snow storm and as Grant (who is wonderfully played byStephen McHattie, who also portrayed the original Night Owl in Watchmen) makes his way to work encounters a strange woman who appears to be incoherently babbling something. She slowly fades back into the blizzard and Grant is left perplexed. This scene alone sets the tone for one helluva creepy movie. It seems as if will be another normal morning as he arrives at the station, however it’s not long after he starts his early morning broadcast that something bizzare is clearly on the rise.

Strange reports begin to flood in about people rioting about town and trying to eat and attack others. Single handedly Grant is intent about figuring out what is causing this behavior and keeping people informed through his broadcast. Without ruining the rest of this incredibly tense film all I can really say is that the cause is so non traditional that it redefines and rises above the traditonal zombie film. That is if this even qualifies as a true zombie film.

The funny thing about this movie is that it pretty much takes place in only one room. Yet when watching it you’d swear you’d been all over Pontypool living this nightmare. That is the great thing about it, the film does not need to rely on gore or splatter, it simply relies more so on your own imagination to scare the shit out of you. It’s not often that I truely get goosebumps from watching a movie but this one had me in a chill several times. Once it grabs you, and it does early on it doesn’t let go. One thing was for certain, no sleep would be had by me ’til this little gem was over.

The director, Bruce McDonald, who also directed the awesome Hard Core Logo needs to be commended on executing this movie the way he did. On many levels this movie could have easily failed and become a total snoozer. But he puts you there and makes you feel as if you’re part of the radio stations tiny snowed in crew. I will say this has got to be one of the coolest, if not best horror flicks I have seen this year. I almost recommend not reading the back of the dvd. I think the film is even better without knowing much more than I have already told you. If you are looking for an intense smart horror flick that will leave you something to think and talk about then go rent this for this halloween! It is the season to be scared…