As you may already know I LOVE Alpha Flight!!! It was probably one of the BEST comic books of the 80’s. How can you go wrong with a group of Canadian superheroes who hunted down Wolverine to bring him back as their leader and  in the process went toe to toe with the Uncanny X-Men?! Plus they were created and drawn by John Byrne-quite possibly the BEST (arguably-but he’s my all time fav) artist ever in comic books! Well even though these guys ruled and hung out with a 10 foot tall Sasquatch, they also had something else that catapulted this amazing team of superheroes to legendary status. Northstar-one of the coolest characters in the Marvel Universe and as I understand it the first openly GAY superhero ever.

I remember when this was revealed it made headlines-but it also made sense-leave it to Marvel I guess huh? It was about time that someone came out of the closet! Northstar had always been a fav of mine, he was a bad ass who took shit from no one and had one of the biggest attitudes in the Marvel Universe only to be rivaled by the likes of  Namor: The Sub Mariner himself. His most popular proclamation: Don’t fuck my sis’ Aurora (Well at least that is how I perceived it). Not even Sasquatch could get away with something like that without answering to Northstar. I found this online and found it interesting from Mr. Byrne and then others:

Marvel editor-in-chief Jim Shooter, wary of promoting agendas from either side of the political spectrum, had decreed that there were to be no explicitly gay characters in the Marvel universe.  The Comics Code Authority also prevented Marvel from publicly stating Northstar was homosexual.  Byrne, therefore, was only able to imply that Northstar was gay.

In Alpha Flight #106, published in 1992, some years after Shooter had left Marvel, writer Scott Lobdell was finally given permission to allow Northstar to utter the words “I am gay.”  The event generated some publicity in the mainstream press and Alpha Flight #106 sold out in a week, despite the fact that the series was not a very popular title. Shortly before Northstar admitted he was gay, he was voted Canada’s most eligible bachelor, in the Alpha Flight series. 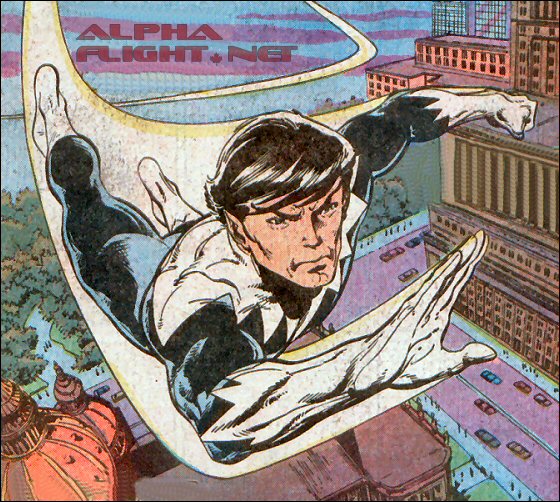 Northstar’s coming out was controversial and as a result, little mention was made of his sexual orientation for the remainder of the first Alpha Flight series, which ended in 1994. It wasn’t ignored entirely, however; one subplot dealt with his sister Aurora’s reaction, in which the “Aurora” personality was accepting, while the “Jeanne-Marie” one was not. A subsequent mini-series starring Northstar also dodged the issue.

While at least three background characters in the classic 1986 mini-series Watchmen were homosexual, making it the first mainstream comics series to feature openly gay characters,  the characters Northstar, Mystique and Destiny were all created years beforehand. And even though the editors at Marvel would not let it be openly stated, these characters were intended from almost the beginning to be gay/bisexual.

By 2001, society’s views on homosexuality had changed considerably. In that year, Northstar’s sexual orientation played a large role in the storyline in which he joined a temporary team of X-Men and faced another recruit, Paulie Provenzano, who was extremely homophobic. Though the two began their mission as enemies, they eventually made peace with one another. Northstar developed the same relationship with Juggernaut, when the two served on the same X-Team.

When Northstar joined the X-Men as a regular member in 2002, writers were less hesitant to address his sexual orientation. Northstar even experienced a crush on the long-time X-Man Iceman, though it was a one-sided love.

One of his students in the Alpha Squadron, Victor Borkowski, the gay mutant Anole, looks up to him as a role model.”

So it got me to thinking, Northstar cannot be the only bad ass mainstream character that was admittedly gay right? So who then has not stepped out of the closet by the year 2009?! All you superheroes get with it already it’s almost 2010 where do you stand?