So since we’re celebrating the established gay comic book heroes, it’s only fair to take a look at their counterparts, the gay villains. So far we have:

After doing some hard time and discovering a “new side”, Electro turns down a shape-shifting prostitute in Mark Millar’s Marvel Knights Spiderman title. 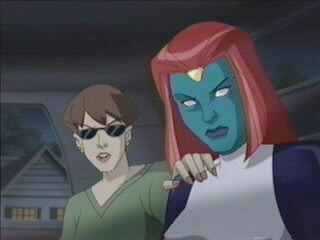 Chris Claremont had originally planned for Mystique and Destiny to have been lovers. The idea was that Mystique took on the form of a man and fucked Destiny until they made a ‘lil Nightcrawler. Unfortunately, the Comics Code wouldn’t allow such a sordid tale to be published. 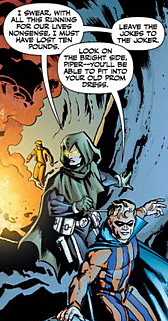 Apparently this Flash villain “came out as one of DC’s first openly gay characters, and joked that this was ironic, as he was one of the few villains to have ever “gone straight”. He first realized he was gay when he became attracted to Rod Lauren when watching “The Crawling Hand“[2].”

Gypsy Moth (Skein for you youngsters)

Socialite, sex club owner and cult leader, Sybil Dvorak is probably my favorite Spider-Woman adversary. In one issue of West Coast Avengers, while confronting the new Spider-Woman (Julia Carpenter) as a member of the Night Shift, she comments that she “…once locked mandibles with the original Spider-Woman”. Seriously, someone please show me where this happened!!

Some of the others worth noting:

Anyone have any others?