So from what I have heard recently online it sounds like there is going to be a “Lost Boys 3”. I am not sure if that’s good news considering how god awful the second one was. Maybe they can get it right in the third? Apparently “The Lost Boys: The Tribe” did pretty well on the direct to dvd market as I assumed it would. Director P.J Pesce slaughtered my dreams of what should have been a super rad vampire flick with both Frog Brothers and Sam Emerson (Corey Haim’s character).

Corey Feldman was the best thing about “Lost Boys: The Tribe” other wise the movie sucked like a hungry vampire. But can he save the third film as the movie’s main character?

Instead we wound up with a lame movie with only Feldman returning in a small role in a movie that was essentially a bad remake of the original. Haim did appear in a small cameo in a 30 second scene that was shown after the credits that pretty much made no sense. Anyway Warner Premiere have given the greenlight on a second sequel to “The Lost Boys”.

According to Bloody Disgusting, Evan Charnov (”Fearless”) has been hired to write the new film. Corey Feldman, who will also be on board as executive producer, returns this time as the movie’s main character, Vampire-Hunter Edgar Frog.

This will mark the ‘Official Return of the Frog Brothers. Jamison Newlander will be reprising his role as Alan Frog. Maybe it’s a good thing that he didn’t appear in the second film and maybe this movie will be a bit like the latest Lost Boys comic book series “Reign of Frogs”. Even as bad as the second one was you can bet i’ll be returning for the third….. 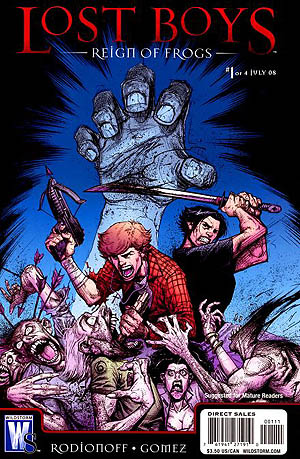 Maybe a movie based more on the comic book series will save it from disaster. I’m sure it will be fine as long as Corey Haim stays as far away from it as possible. That’s one lost boy who should stay LOST.