‘White Fire’ from 1984 is one helluva bizarre movie, it’s not only filled with a ton of crazy ass action sequences but it’s also got a complete WTF plot going for it that you kinda just have to see to believe. ‘White Fire’ starts off with two siblings (Bo and Ingrid) who witness a gang of crazed soldiers sadistically murder their parents. There’s fully over the top action kicking into gear right from the very start including a bonkers attack on the kid’s dad with a flame thrower that you just gotta see to beleive. It’s one of those “rewind & watch it again” scenes as the stunt dude is completely bombarded with a flame blast with no head or face protection, and for an instant the guy is fully engulfed in flame. Anyway only the two kids manage to survive the bloodshed. Flash forward twenty years later… Bo and his beautiful sister are grown up & employed at a hi-tech diamond mineshaft operation located in the desert that looks straight out of a 1960’s sci fi flick. The inseparable pair soon stumble upon the discovery of a legendary supernaturally powered diamond, called the “White Fire.” Both are immediately pursued by a gang of evil villainous thugs who’re dead set on getting their grubby hands on the diamond  themselves. Check out this radical poster/box art for the flick: 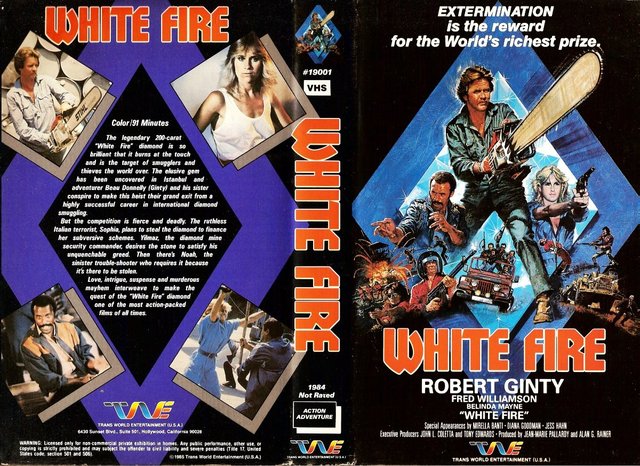 Well once the pursuit starts, things get outta hand pretty quickly and we witness the bro and sis duo’s bizarrely epic kung fu skills & brother Bo even resorts to grabbing a chainsaw to fuck up a whole gang of goons on a dock. They’re a great team and soon we get to the real weird shit, lots of his sister Ingrid fully nude at a private swimming pool and Bo comes around afterward and rips his sisters towel off her refusing to give it back. They proceed to laugh about it while she’s completely exposed in front of her brother for far far to long. Ahhh that good old innocent brotherly love! Shit gets even weirder when his sister dies soon after while kung fu fighting a whole gang of villainous goons while still sporting her towel, that now refuses to  fall off.

Naturally Bo is super duper bummed out to find his sister has been murdered but the next day he runs into a random lady in a bar while greivin’ n’ drinkin’ whom he ends up approaching with an offer she just can’t refuse! 50 grand to get a face transplant from his dead sister and learn to imitate her! Naturally the woman goes for it, because for some reason I’m a bit confused about still, having his sister alive will help them get the diamond or some shit? Whatever, Bo naturally falls in love with the woman and when she gets the face transplant things get mega awkward!! Now she looks identical to his dead sister, but what’s he to do, he’s already madly in love with her!

The rest of the movie’s a blast, iconic bad ass Fred Williamson shows up as a hired bounty hunter dude to raise some hell for the duo and there’s action a plenty to behold, even a dude who gets his crotch fully mangled by a table saw! There’s a surprising amount of gore here sprinkled throughout to compliment the bonkers plot that will leave you continuously scratching your head in confusion. White Fire’s got some rad locations too, most of it takes place in Turkey and it’s a treat to see the city of Istanbul in the 1980s. Directed by Jean-Marie Pallardy, who mainly directed porno flicks, ‘White Fire’ is definitely a party flick worth a watch with a gang of rowdy cinema fiends!