I just checked out the debut issue of ‘Quantum Teens Are Go’ out now from Black Mask & as far as first issues go it’s got some pretty good things going for it. The book’s tone is super light hearted (which is a nice break form the grit) and if you’re a fan of those old 80’s teen sci-fi flicks movies like “My Science Project” you’ll likely dig this more updated take on the genre. The story starts out with a bang as our two daring teen characters are raiding a mysterious abandoned research facility in hopes of stealing something special. The place is guarded by robots and soon we see them running for their lives with their high profile stolen goods. 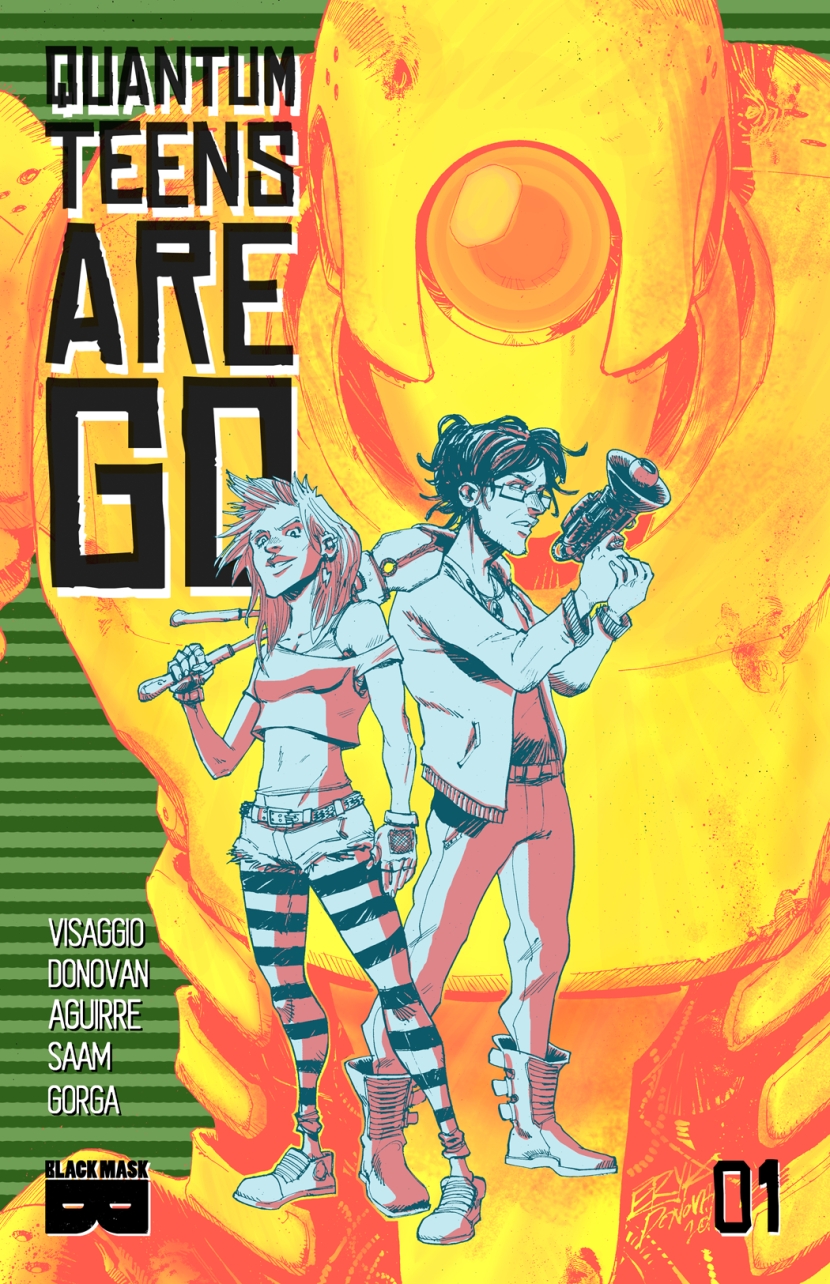 We soon realize the teens are anything but normal as they seem to working on some sort of odd hi-tech machine in their garage carefully adding the mysterious stolen parts to the equation. We also come to find that one of the characters named “Nat” (formerly Brandon) is transitioning to a female gender clearly with some resentment from her parents. Hey boyfriend who’s kinda like a nerdy mad scientist has been hard at work on some sort of time travel machine and his grades are suffering. He’s also got issues with his “parents” who’ve taken him in as their own as we realize something has happened to his real family for unknown reasons as of yet at least to us.

‘Quantum Teens’ has some great modern day teen issues going in the story along with of course a bully in school who’s clearly got a problem with the two and the fact that Nat was once identifying as a boy. It’s got the current atmosphere of the times, which seems to be all the rage in the comics these days fitted in with a sweet little opening to what might just might prove to be an epic time travel adventure. Only problem is they’ve reached a point in their garage based science project that’s got them stumped. So they hit the streets in search of some answers from some pesky bandits who’re in a similar business…

Hence we’re introduced to some other interesting supporting characters, one described as a poor man’s “Matthew Mcconaughey” who’s there to help the teens get their machine in working order. We’ve got a cute, bright and intriguing story set up here in the first issue that looks to be headed for some fun times. I totally dig simple stories like this that have a bit of a throwback feel to them harkening back to similar vibes like “Back to the Future”. The characters are witty, vibrant and the artwork is decent enough. Though this issue didn’t reinvent the wheel it’s a nice fast paced story so far that’s likely to put a smile on your face in these gloomy times as of late. Check it out if you’re looking for something that’s not going to depress the shit out of you!