This awesome cover for The Incredible Hulk # 302 which debuted in December of 1984 and is beautifully illustrated by Mike Mignola. It’s from a great Hulk story arc where he is banished to “The Crossroads”, a strange dream-like world in another dimension, which Doctor Strange exiles him to for quite a few issues. You see right around this time The Hulk was causing the world a lot of trouble. Shortly before this however The Hulk inherited Banners brain and was “free” of the monster. Hell he was even asked to join The Avengers again! However it didn’t take long before the monster took full control again and The Hulk became a near mindless monster entirely. 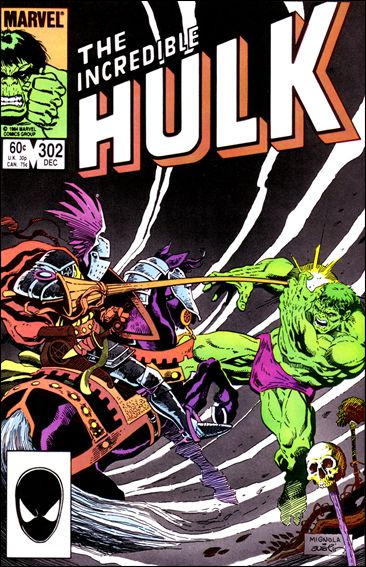 During his time in The Crossroads The Hulk traveled to many strange places, this particular issue he arrived in a bizarre midieval kingdom where there was race of brutal red skinned knights rule the land and as The Hulk learns early on he is no match for their strength. This is a great story as The savage Hulk learns what it feels like to no longer be the strongest one there is. The Hulk gets his ass kicked bad multiple times here like never before. 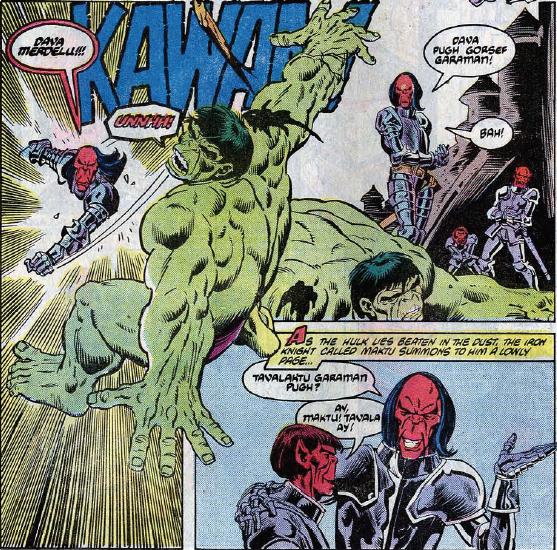 It also features a green skinned maiden who’s tears turn to flowers who I think may remind Hulk of his old flame Jarella.Oh yeah and no one speaks english so it’s pretty neat as it’s based on the art and some minor narration. Check out these great Crossroad Hulk adventures they’re actually pretty awesome and heartfelt. Also you get some amazing covers by Hellboy’s own Mike Mignola-which is quite special if you’re a Hulk fanatic!