I am quite a fan of Jon Knautz’s Jack Brooks: Monster Slayer, I love his old school approach to the movie using all practical monster effects. It was awesome and I think that when he finally gets around to making a sequel it’s going to be even better than the first. So far he has only made two full length movies, his second being the recently released on dvd, “The Shrine” which I have been looking forward to for quite sometime now. It wasn’t quite worth the long wait but it was a damn good attempt. It had quite an intriguing story though and a nice twist ending I gotta admit. 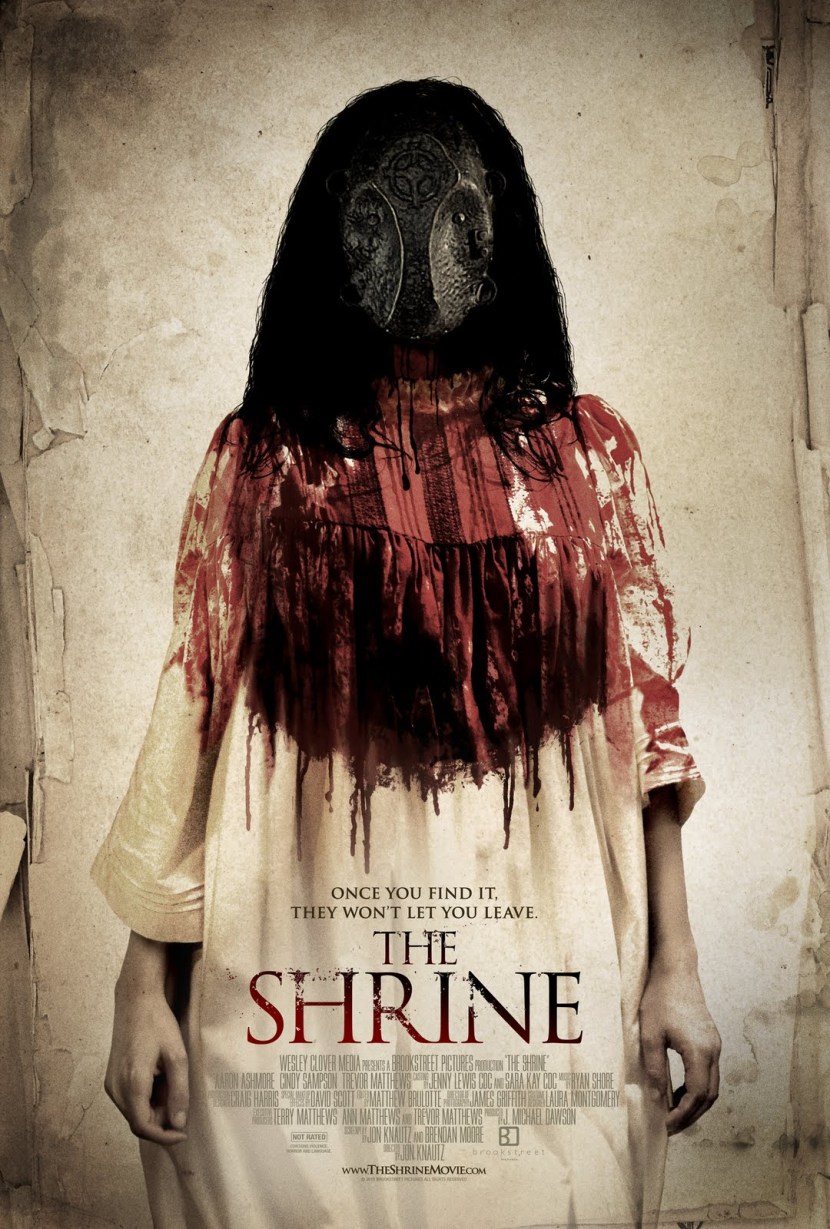 The premise is quite simple a trio of reporters head to Poland to check out the disappearance of a tourist there and end up in a tiny village in the countryside. There this quaint little town is filled with some seriously oddly aggressive people, one being Trevor Matthews, Jack Brooks himself. The three stumble upon more than just grumpy villagers as they head off into the woods to check out some creepy ass fog in hopes to find some clue to the missing person. Instead two of them (the women) get lost in the fog and end up staring at a demonic statue. It’s not long thereafter that the angry villagers run into them and take them prisoner and begin to sacrifice them one by one to their demonic gods.

I won’t say too much else about the plot points here, but I will say it plays out a bit like the Exorcist set out in the woods of Poland. Also beware that there are no subtitles, and I am sure it’s for good reason. To me it actually made the movie more interesting, but I’ve also read that a lot of people just couldn’t hang with not knowing what those pesky Polish villagers are really up to.

So yes it was a fun movie and for the most part continued on with Knautz’s love for practical effects. But I must say when it was over I was left wanting just a little bit more. It’s the type of film that you feel is going to just explode in it’s finale, very much like Jack Brooks: Monster Slayer did. It however just doesn’t measure up in the conclusion. It’s a well filmed, suspenseful little movie but it lacks the punch you think it promises. It also had me confused because the movie’s lead Aaron Ashmore, is the twin brother of Shaun “Iceman” Ashmore, it wasn’t until the movie’s end that I realized it was actually his twin. I recommend this film and perhaps after reading my little review it will actually be more enjoyable as the bar isn’t set as high. Now letting go of my preconceived ideas of what the films was going to be it’s safe to say that in the sea of junk horror films out now Knautz gives us an evil little slice of delicious cake. However I think it’s now time for that Jack Brooks: Monster Slayer sequel don’t you?