I just read today that James Cameron has been giving Arnold some serious advice about signing on to another Terminator flick. He expressed to Arnold that basically the last two Terminator movies totally blew. Well I have to say he was right about that, Terminator 3 was a waste of time as it was essentially T2 with a new John Connor and a female version of the T-1000. Totally un-original and un-needed. Terminator: Salvation was a pretty bland attempt at showing the future struggle of Connor, but let’s face it it was pretty lackluster and the CG Arnold just didn’t cut it at the end. Nothing compares to the real thing.

So now what? Arnold is making movies again and naturally he’s got another Terminator movie in his sights. Camereon recently told him not to sign on for another film unless the movie’s main focus was the T-800. Well Cameron since you got your undies in a bundle why don’t you just write and direct the damn thing! My problem with all of this is simple & the question is clear – is Arnold too old to play the legendary cyborg? My answer is yes. I am all for sequels normally and older actors returning as their famous characters, but in this case we simply can’t have Arnold running around at 65 with the leather jacket and shades on reciting witty one liners. I personally thought he looked a little old in T3. Cyborgs don’t age…..or do they? Hmmm…maybe the rest of the skin and muscle ages like a normal human while the machine beneath stays the same? Not likely….but it’s an idea huh? Or they could have Arnold played a really haggard battle scarred T-800 like the one in the pic above-he’d have to sport some heavy make up but it’d work if he didn’t mind looking the part for the movie. 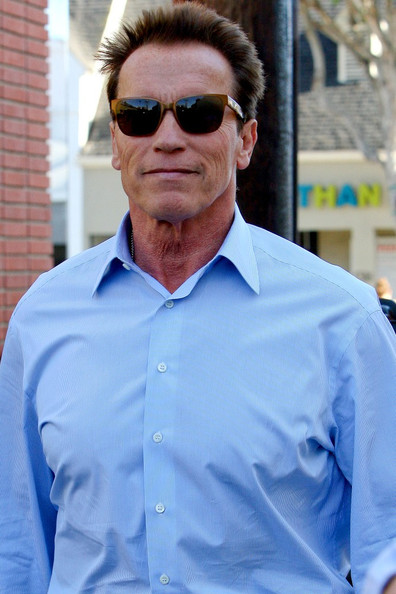 What I think should happen is the next Terminator movie should be directed by Cameron and yes Arnold should of course be the main focus. No questions asked. But, they should have him play the character in which the T-800 was based on, or perhaps Arnold is the man who created it in his image. Perhaps Connor comes back in time (played by Edward Furlong of course this time!!!) to save him as Skynet realizes that it’s creation actually worked against them as the T-800 seemed to always assist Connor in surviving all the past attempts. Any other plot is going to end up being too far stretched, but with the return of the original actors, done right with Cameron attached could be amazing.

It’s really a no brainer on how to do this film correctly, but alas this is Hollywood we’re talking about here folks and somehow they usually manage to fuck it all up…..here’s hoping they read my blog!