In response to the most recent post about the new horror flick “The Collector” being more or less a total clunker, I just had to give theater going horror fans a little hope. I realize that this movie opened up on the 24th and many of you may have already seen it, but for those of you who haven’t you need to trek on down to the theater for “Orphan”! 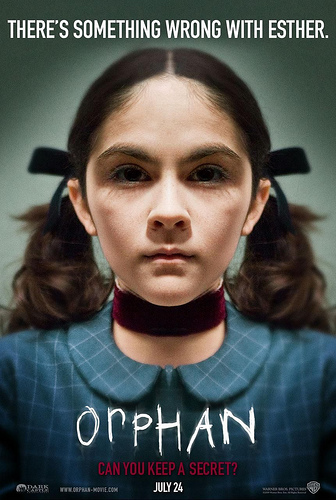 I was thoroughly impressed with this one. The Plot is pretty simple, married couple Kate and John are pretty torn apart about the loss of their unborn child. To rectify the situation they decide to adopt a child even though they already have two perfectly normal children already. At the orphanage they meet the “cute as a button” Esther, a nine year old child from Russia. Extremely talented and charming they are quickly swept off their feet making a snap decision to adopt her.

She appears to be a perfect addition to the family, and is a adored by their youngest deaf daughter “Max”. However their older child Daniel, a boy who’s roughly the same age as Esther thinks she’s a total “square”, refuses to accept her as his sister and humiliates her any chance he can get while their at school together. But as you can guess Esther is not your average nine year old. She’s got a temper. A bad one. She’s also extremely manipulative and soon she has nearly everyone around her believing her new stepmother Kate is an abusive, alcoholic mother with a few screws loose. What transpires in the rest of this awesome movie is a series of brutal events and thrills. It’s well shot, extremly well acted, and manages to get pretty daring by packing in some pretty uncomfortable scenes (you’ll just have to trust me on this one). Director Jaume Collet-Serra does a great job here and it’s hard to picture this as the same guy who was responsible for 2005’s “House of Wax” (which I also enjoyed).

It seems that if Mccauley Culkin’s “Good Son” character were living on the same block as Esther he would have gotten his head bashed in with a hammer by her within the first thirty seconds of their meeting. Yeah this movie finally does the “kids gone crazy” genre right. Esther is truely a manical movie villain and by the end of this flick you’ll be even more creeped out by her than you’d imagined was possible. The movie is a simple yet twisted tale with a knock out ending M. Night Shyamalan only wished he was still capable of. So check this one out if you haven’t already and lock your doors when you see that strange little girl who lives in you neighborhood walking by your house!