This week we take a look at one of the most fun comics ever created: Marvel Two-In-One. These usually featured the Thing teaming up with someone he didn’t often get to within the Fantastic Four’s monthly title. In this amazing issue, you not only get a bed-ridden Benjamin Grimm, but pretty much every single hero and villain residing in the marvel universe. 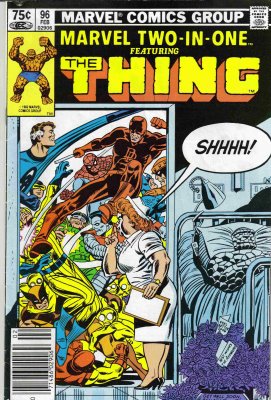 Yes, Ol’ Blue Eyes says his signature “Whatta revoltin’ development” and “Idol a’Millions” lines, but the following tidbits are the real reasons every Marvel fan needs to own this issue:

-The fact that it’s a direct continuation from the very classic Marvel Two-In-One Annual #6 where Thing gets the snot beat out of him by The Champion.

-A retired, and cancer-free Bill Foster shows up with his girlfriend/nurse only to interrupted by a crotchety old “Nurse Hasselbutt” who reminds Ben that he has to stop sneaking beers and cigars into the hospital. Downer!

-The Mad Thinker is mad about something he was thinking about.

-Fabian Stankowicz (I love the name Stank-o-wicks) shows up as the Mechano-Marauder who actually looks a little menacing sometimes. Someone needs to bring that character back, slightly upgraded and have him fuck with Daredevil (and whoever he loves at the moment) for a 10 issue arc.

-Ben Grimm complains that his “stogie”, taken away by nurse Hasselbutt, cost him a whole $0.50.

-Scott Lang ANT-MAN!! He fights some guy named Shellshock that looks like he would be a major villain for Ant-Man, he looks like a bol weevil or some type of burrowing beetle. And yes, Ant-Man defeats him by putting ants in his pants (somehow this works very well).

-The all-female villainess group, The Grapplers show up to fuck Ben Grimm: “The Grapplers will attack from the rear!” Titania says.  This inludes a great early Screaming Mimi (AKA Songbird) appearance, where much like every other appearence, she does very little.

-And last, my favorite part. A shadowy figure enters the Thing’s hospital room which causes him to look very frightened and say “YOU?! No, it can’t be!”. The figure is revealed to be none other than the Sandman, who instead of wanting a fight with the vulnerable Grimm, brings him cigars and a six-pack which they sit down and share oblivious to the contest of champions happening just down the hallway!