It’s now the new year YAY! 2015. Everyone has now felt the heavy hangover that comes along with New Years once again. Everyone attended parties and got wild and crazy! So lately I’ve been thinking about my favorite superheroes and if I were throw a party, just which of them I’d invite. It’s an interesting idea figuring out who’d get an invitation and as much as I love The Incredible Hulk he’s the last guy you want at the party. First off Banner would be a total bore, that is unless he got pissed off, then you’d have real trouble on your hands! Plus imagine The Hulk wasted, it’d be nearly impossible to have a conversation with his already limited vocabulary! People like Captain America and Superman can stay home too, drink milk and nibble on cookies because the last thing you need at a party are a coupla’ goody two-shoes!

So just who the hell are the best of the best to party down with? Well use my guide next year and make sure these superhumans are on the A-list! They’re certain to provide plenty of entertainment to any party! So let’s get started!

Number 10. Iron Man
Who the hell doesn’t want a rich playboy at their party? Hell, Tony Stark is one of the most famous alcoholics in comic book history! He also could fund the entire thing himself for you, and bring al of his hot ladyfriends along with him to really liven things up. The only problem could be that Tony may not know when to quit and could end up lingering at your house far into the afternoon of the next day. You’d have to be careful because he’d most likely be the guy who’d have you back partying in the A.M. leaving you with a heavy week long hangover to recover from. Bottom line Stark just don’t know when to quit!

Also just make sure he’s not depressed, he’s known to be quite an annoying drunk when he’s down and out. Invite with caution!

Number 9. The Sandman
What? You didn’t know ol’ Sandy was a party animal? You betcha, though he’s a bit of a rogue he’s a great guy to invite to the party! He’ll come equipped with a bunch of interesting stories and he’s always willing to bring the beer! Little known fact the Sandman is a drinking bud of Ben Grimm and has even visited Grimm in the hospital….with a bunch of beer! Sandman is a good guy to know but a bit of a wild card, he’ll be a lot of fun but you may have to keep an eye on him to make sure he doesn’t steal your cash from outta your wallet while you’re taking a leak!

Number 8. The Badger
Yep this guy will most definitely make your party interesting and he’s from my home state of Wisconsin to boot. Badger is quite an interesting character who just so happens to love partying! Being from the land of cheese he’s quite able and willing to down as much beer as you can put in front of him but he also has multiple personalities, lives with a Wizard named “Ham” and has an odd habit of calling everyone “Larry”. He also can speak to animals so if you have any pets you can be rest assured that they’ll have a great time as well! He’s probably the only superhero who’s played tug a war with Spuds MacKenzie for a beer. The only problem is he’s completely bat shit crazy-wait is that a problem?

Number 7. She-Hulk
Hell yeah we need some female energy at the party for sure and why the heck shouldn’t it be She-Hulk? She’s super funny, a total babe and incredibly flirtatious! You know she’s gonna show up to the party dressed to impress too!

Plus she can drink any party bro under the table but watch out cuz she’s been known to hit on guys pretty hard too after drinking a bit too much, just check out how she threw herself on The Thing! Dang this would not fly in 2018! 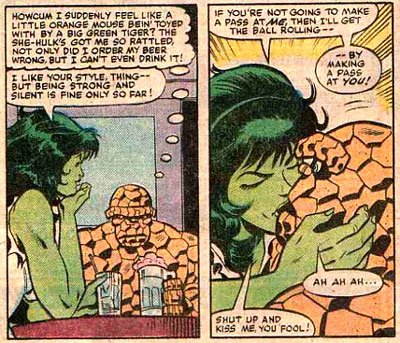 Number 6. Lobo
Lobo is notorious for being one the most feared bounty hunters in the universe, even Superman doesn’t like running into him. However he’s also one of the people you want most to arrive as he’s well known as one of the biggest party animals in DC’s catalogue. He’s known to frequent the coolest dive bars in the galaxy and also known to give up a winning battle only to continue getting drunk! This guy will bring life to your party that’s for sure, but just make sure that you invite over him when he’s not working, if he show’s up while on the job you can bet your ass someone’s gonna die at your house that night!

Number 5. Wonder Woman
A lot of people forget that Wonder Woman is indeed an amazonian! It’s been proven in the past that Wonder Woman likes to get wasted just as much as her sisters. She’s a responsible drunk and will probably only agree to come over if there’s just cause for a celebration. However once she gets a few in her you can bet that she’ll be giving ol’ She-Hulk a run for her money. She has claimed before that her female amazonian tribe are known throughout the land as “Champion Drinkers”. Once she’s drunk then maybe she’ll come spill the beans on her past romantic escapades! Enquiring minds want to know because you know what they say, drinking is like a natural truth serum…

Number 4. The Juggernaut
Ol’ Juggy has been on both sides of the law at some point or another in comic book history but I believe that at the end of the day there’s nothing Marco wants more than to enjoy a few drinks. He’s been spotted several times frequenting bars in the past, one of my favorite moments is in X-men #183 where he throws down with Colossus, after Rasputin accidentally spills his beer on to him. Though a great addition to your party make sure nobody ticks him off, the Juggernaut has a short fuse and a wandering eye. Women beware of this guy when’s he’s been boozin it up!

Number 3. Puck
Not many people can party quite like a Canuck! So that’s why Puck would have to be there as well. Imagine asking this pint sized ball of energy to grab you another beer? He’d be bouncing off the walls on the way to the fridge. 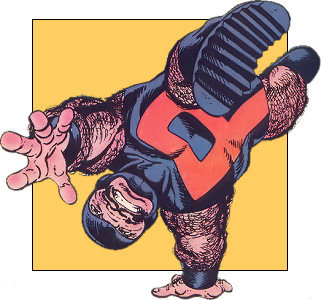 Puck loves to drink and spends a good deal of his time on the bar stool. Back in X-men Unlimited #12 Wolverine, of all people, confronts Puck about his drinking problem! You gotta be some special breed of party animal to have Wolverine schoolin’ you about drinkin’ too much!

Number 2. Hercules
Oh man I know this is turning into what some people like to call a sausage fest but Hercules is a must for any and every party! He’s the most happy drunk of all time. This dude exists really only to party it seems. He’s got a big ego but also loves to get wasted with the locals any chance he gets. Hell, back in the classic (my favorite Avenger’s story) “Under Siege” he returns to the Avengers mansion completely blitzed and still puts up a fight against The Masters of Evil! This guy is the real deal, so make sure he’s on your side when someone decides to start some shit at your place!

Number 1. The Thing / Wolverine
No party should be without one of these guys, It was clearly a tie.

The Thing is a truly loveable guy. Period. He’s got true heart and guess what? He loves to drink! He’s spent a ton of time at his local tavern on Yancy Street. There’s not much he loves more than a good stogie and a beer. He’s a superhero but also just an average Joe at heart. I think with the Thing at your party you’re likely to get some serious “heart to hearts” with ol’ blue eyes. The Thing will be able to hold his liquor too and probably be the last guy standing at the end of the night. There’s even an issue of Marvel Two in One (#86) where The Thing and The Sandman just hang out at a bar shooting the shit. The cover of it has The Thing simply asking “Wouldya Believe it’s Miller Time?” Need I go on?

Wolverine. Yeah now who doesn’t want this guy at their party? He’s easily the number one drinker of all a’ Marvel! Logan has been in bars so many times in comic books throughout the years it’s unbelievable. It seems like he’s been in the taverns in the comics equally as much as he’s been anywhere else. In the issue described above with the Juggernaut (X-men 183) he takes both Nightcrawler and Colossus out to the bar then sits back and watches Colossus get his butt kicked by Juggernaut. Why? To teach Colosus a lesson at the time about screwing over Kitty Pryde. So Wolverine will get you wasted and if need be teach you a life lesson to boot! When he comes to the party get ready to get reeeeal drunk because it takes this guy like four times the amount of booze a normal guy would need to even get a buzz! Make sure you have Tony Stark buy a couple extra kegs that night if you know Logan is coming! 😉