Who doesn’t love a transforming robot?! Have you ever met anyone who didn’t? I never have but I have met plenty of people who hate the Michael Bay Transformers movies! Leave it to Bay to screw up a simple lovable concept with the greatest of ease. So I am here to say fuck Michael Bay and his stupid Labeouf Transformers. Please people don’t try and defend the franchise because you heard Mark Wahlberg is going to star in the next one because guess what? It’s gonna SUCK big time regardless!

So instead, all of you people who like transforming robots and a helluva lot of fun, need to check out Karate Robo Zaborgar! It’s a super fun movie that won’t let you down the way Bay does. Instead fans of say The Shogun Warriors, Godzilla and those 1970’s and early 80’s Japanese robot cartoons will eat this one up! Director Noboru Iguchi who’s also responsible for films like Machine Girl and Robo Geisha brings the weird and wacky in this feature film about a man and his Transforming Robot “brother” which is basically split into two one hour episodes. The movies run time is really the only problem it had, it’s not at all boring but maybe just a tad long. For some reason it seems a lot of Asian cinema I’ve watched recently has a bit too long a run time. Maybe it’s just me though?

However the movie is jammed packed with ridiculous villains, monsters, ultra cute women (watch out for the dragon breasts!!!) kung fu fighting and one weird ass love story. I had a great time with this one, it brought to mind Jet Jaguar, Ultraman and The Power Rangers only with one weird ass situation after another. So if you are in the mood for a great unusual treat, grab some beers and your best buddies and behold this gem! 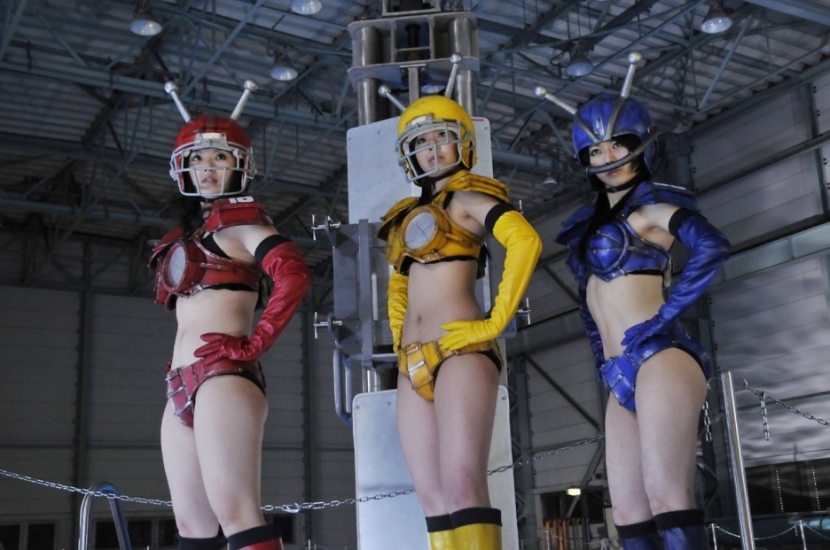