I have been reading the new image series “Revival” the past few months and it’s quickly shaping up to be one of my favorite monthly titles. I am making bet that it becomes the next big hit for Image comics. I still am a big Walking Dead fanatic, though for me the story has gotten a little dull over the past year or so. Even with the “shocking” death of Glenn recently I think Kirkman needs to shift gears in the series and bring The Walking Dead story to some new fresh levels. The Walking Dead is feeling a little to “dead” lately, as I have said before “shocking” deaths don’t necessarily equal great story telling. 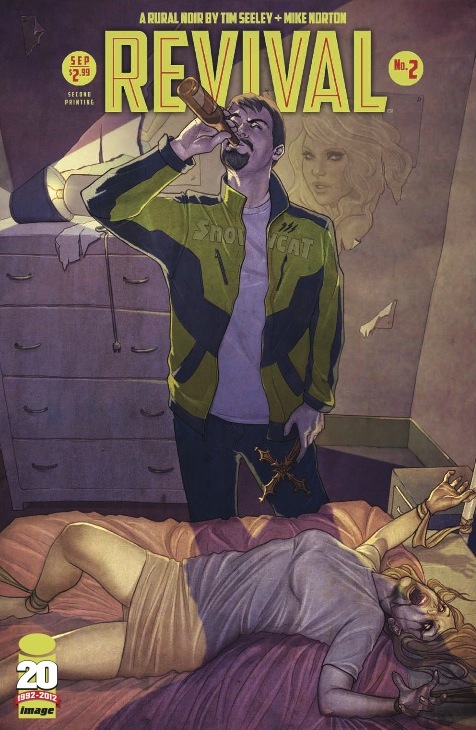 So I am pleased to report there’s a great new series that does deliver us some fresh new ideas on the “undead” a genre which to be quite honest is boring the shit out of me lately. New zombie movies? I don’t even care to see ’em anymore. I’m so burnt out on the zombie thing it makes me kinda sick to my stomach. However this ain’t the case with Revival. So far they’ve crafted an intriguing little story set in my home state of Wisconsin. Yeah there are undead, but not your typical, these people rose from the dead on day in this small contained area of the country. They aren’t mindless creatures, they return to their former daily lives. The only thing is these undead have quite a temper and on top of that you’ve an eerie thin white creature wandering through the forest and a bizarre religious “Limp Bizkit” listening exorcist taking care of possessed teenagers. Yeah it’s a fun one and it’s all in the hands of a small town detective named Dana. So if you’re looking for a cool, original and refreshing horror “farm noir” adventure then you need to grab Revival ASAP! I’s bound to be big.. Also for a great interview with the series creators Timm Seely & Mike Norton check Comicbookresources.com and get the full scoop!