Hey everyone it seems word on the net today is about the possible ALF reboot / remake full length feature film! Sounded good to me when I first heard about it, I mean you have to have no soul to not like ALF! I am certain there are some youngsters out there are like who the shit is ALF? But all of us 1980’s kids need no introduction, his name stands for Alien Life Form. He’s a furry smart ass alien who loves to dine on….Cats! 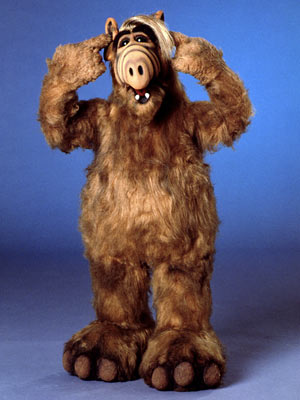 It was also one of best 80’s sitcoms around & Alf was brought to life entirely by puppetry. This version boasts a CG Alf. Uggh…hey Hollywood did you see the latest installment of The Muppets movie? Do you think that would have been any good if Kermit and Co were CG? It’s no wonder that this is the direction the movie is taking as Jordan Kerner the “genius” behind the latest Smurfs movie is Alf’s producer. This movie could be a completely nostalgic & delightful throwback for all of us. Somehow I have a feeling this new version of Alf will be a bunch of watered down Hollywood Schlock. Only Hollywood could ever be accused of something as atrocious as watering down Alf. But they are already en route to doing so. The good news is that original voice of Alf, Paul Fasco is on board at least! Maybe I am being too hard on Hollywood? But hey Alf was never broken, he doesn’t need to be fixed….in the meantime puppet ALF is saying F’ off to CG Alf via this ALF Metal, this isn’t the first time I posted this here because it’s goddamn amazing!!!