Yes please take me back to 1985! Back when arcade games were super rad and fun to play! I know all of you out there think XBOX with it’s fancy ass graphics is the shit but you know what? I am a nerd, true, but I haven’t gotten sucked into these new video games! The closest I got was a few years back when I played the Nintendo Game Cube a couple times a week! I have to say X-Men Legends was a fun game, Baldur’s Gate was a blast too but you know I just never could get sucked into these ultra violent games that people spend their lives playing today. Instead I think about going to the arcade back in the day and playing my favorite fighting game, “Yie Ar Kung Fu”! 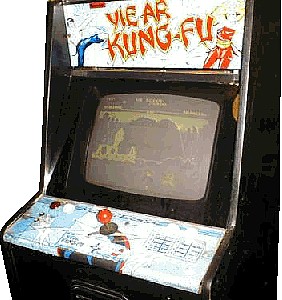 Many may be wondering what the hell I am talking about? Well back when I was a kid we’d spend a lot of time at our cottage in Northern Wisconsin and my brother and I would head to a tiny arcade in a laundromat in the tiny city of Elcho. We be there for one game Konami’s Yie Ar Kung Fu was the best fighting game! You played a sort of Bruce Lee like character named Oolong who well spends his time kicking a lot of ass through ten different bad ass foes armed with dangerous fans, clubs and tonfun.

I haven’t played this game in decades but somehow today I found myself wishing I could find a stand up version somewhere-Believe me I would be playing for hours if I did. This has really gotten me to thinking that the whole idea of arcades should come back with similar style stand up games. Someone out there needs to make some new version old school games in the old format-at the end of the day I just don’t have time to screw with a controller with like twenty buttons on it-just give me a roller ball and a button like centipede and I am a happy camper….