Welcome! Here at Universal Dork we try to offer diversity in our blogging that will appeal to all dorks out there. Here is a new running series of blogs appropriately entitled Cartoons Dorks Should be Watching! It will feature newer (within the last 5-10 yrs) cartoons that our generation might be missing. Or frankly, cartoons you might be passing off as ‘toon trash on Saturday mornings. It needs to be said that many of these cartoons have stayed focused at their primary audience…kids…so you have to enter willingly and just be a lover cartoons with great characters and stories. 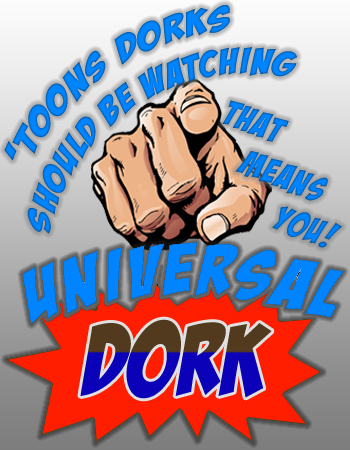 Read on after the jump for just a bit more tutelage…

In the day of Hollywood remaking, reviving, recreating, etc., and every movie featuring characters that are/were cult/popular when we were growing up…I have to say that the state of cartoons has never been better. Easily we had great ‘toons in the 80’s (i.e., Transformers, G.I. Joe, He-Man), and sure, some have been “re-imaged”, those of course will be covered, but there are also some very creative and original cartoons that all dorks should be tuning into now.

I realize that most approach today’s cartoons with the same thought…”But they are sooooo child-ish, and there is too much comic relief for the kids…” yada, yada, yada… If you have not done so, I encourage you to go back and watch some of those classic ‘toons you hold so dear to your heart. I think you would find that they are very child-ish and there is too much comic relief…as if they were made for kids…I smell a conspiracy here! But at the core, the story, message, and characters were phenomenal and still to this day they inspire the hell out of me. Each has original characters and underlying storylines that are nothing short of prime sci-fi and fantasy. At a minimum, these are cartoons you should be encouraging your kids to watch to unleash their primal inner dork! Hell, we need all the help we can get to continue this lineage of dork.

So without further adieu, Universal Dork will kick off the series covering great cartoons of that are going to be considered cult and classics 20 years from now. Keep an eye out in the near future for the first installment of Cartoons Dorks Should Be Watching!

In the first installment, Universal Dork with cover Ben 10!

And as always, we appreciate your following the Dorks at the Dork! Universal Dork!