I read an article at Ign.com today about the Kick-Ass the movie and the new movie posters! I am so damn excited about this movie I can’t even put it into words. If you have ever read the comic book then you totally understand why. It’s one of the best comics I have ever read and sadly one of the quickest reads too. I have always wondered what it would be like in the world if we had real life superheroes and I’m not talking about those guys that walk around the streets in costume giving food to homeless people. Don’t get me wrong it’s a good deed but I am talking about real life masked crime fighters. Well as you probably already know this book answers that question in a world where nobody has super powers. Hopefully the movie won’t be a watered down Hollywood version of the the comic. Anyway here’s one of the posters. Ign has a cool article there about the movie and three more versions of the posters. 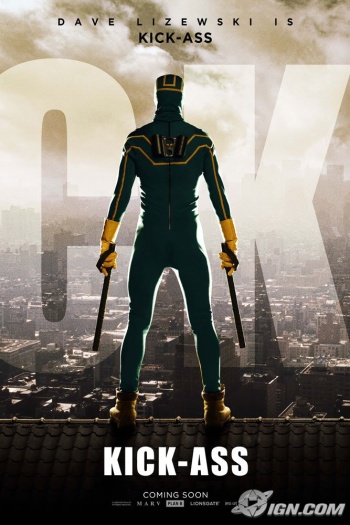