At the time the awesome Archangel made his return to Marvel comics i didn’t have a blog. So beleive me I would have posted this sometime ago and I really wanted to see if they were going to keep him around or if  the whole idea was a just part of a short story arc. Well it appears that he is back for real in the pages of the awesome revamped Marvel title X-Force (athough it seems none of the other X-titles acknowledge his return as this character yet).

It was about time the X-Men had a team like X-Force. This time around they are a covert team that is not afraid to kill and is led by Wolverine (the best choice for this type of team obviously). The roster includes Wolfsbane, Warpath (The Original Thunderbird’s bro), X-23, Elixir(the healer), Domino and finally  The Vanisher. Anyway in the pages of X-force is where Mr. Worthington transformed  into the awesome Archangel and had his feathery wings ripped once again from his body-poor guy. I could never really understand why Marvel decided to change him back into Angel. I always really liked the chacter but compared to the other X-Men’s powers his was always pretty well….lame. I mean really, the guy’s power is…he can fly.

When he was tranformed into Archangel in the 80’s he became a force to be reckoned with. He could go one on one with Wolverine or even kick Sabretooth’s ass(In X-factor #51 & 52). The actual story of  how and why he got these metallic razor wings was awesome as well and I was so bummed when his metallic wings broke open like a coccoon to reveal his old feather ones and later his blue skin was turned back to normal. Either way I highly suggest that any fan of ol’ Archangel go check out this series if you haven’t already. It’s bloody, gritty and has a ton of old school X-villains. It’s easily one of the best Marvel titles out there right now. Let’s just hope that this time around they keep Archangel is here to stay…. 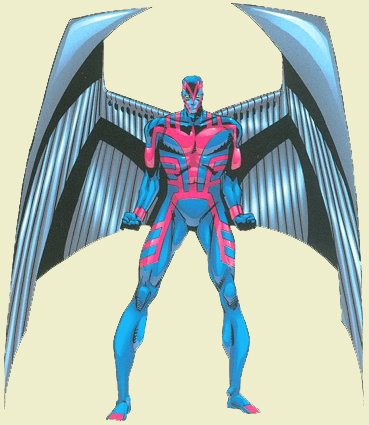 The 80’s Archangel drawn by the Amazing Walt Simonson.