I sat up late recently and read the latest Daniel Clowes graphic novel “Mister Wonderful” in one sitting which quite honestly isn’t that hard to do. Mister Wonderful is a sweet little awkward tale and pretty much exactly what you may already be expecting from Mr. Clowes. It follows the simple story of middle aged Marshall who’s struggling out on his first date (a blind one) in over six years after a nasty divorce. Marshall finally arrives back on the dating scene after gaining a little self worth from a one night stand with a strung out clepto drifter. So he agrees to meet a new woman at a coffee shop and that should be an easy feat right? Wrong, as we see exactly how out of the loop he really is.  He immediately assumes the worst as he waits for his date and ends up getting drunk thinking he was stood up. Well much to his surprise an attractive woman named Natalie shows up and proves his worst fears wrong.

Now that’s not to say that Natalie hasn’t brought her own heaping pile of baggage to the table with her. It’s fun to see exactly where these two end up near the closing of the night. The story is a fun and actually pretty realistic take on dating in your late 30’s and early 40’s. There’s a lot of territory to be covered on their evening together, and this tale seems to have a much more light hearted ending than Clowes usual fare. There’s also a lot of well delivered dialogue here too and the inner thoughts of Marshall’s which clearly overpower much of stories situations are quite intriguing.

However as fun as a read as this one is I can’t say I really loved any of the characters. Though they were pitifully interesting at times, there was something a bit generic to some of the scenarios and it was, at times a little hard to really feel the compassion that must have been intended for these characters. If anything though it’s hasn’t sugar coated the stresses of dating a little later in life, when you’re not quite the person you used to be, you wear your insecurities on you sleeve and feel like the possiblity of finding love again is lost. 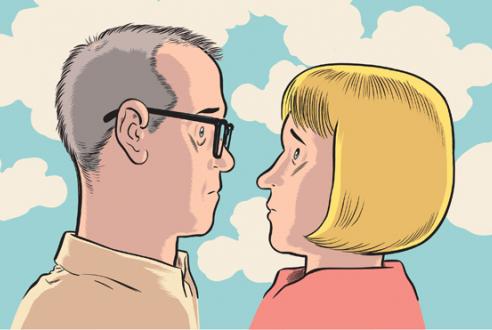 If you’re looking for a non traditional story of awkward aging romance then you have a winner here and like always there some great artwork and a few wonderful spreads that appear just at the right moments. Clowes does indeed do it again this time giving a little bit of hope to all out there struggling to survive after devastating relationships end. There really is someone for everyone out there in this crazy world….