So i would like to dedicate part of this blog to some of the worst, most god-awful, lamest, loser villains in comic book history! When you think Captain America you think of the Red Skull, Baron Zemo or maybe even Baron Blood right? WRONG. Enter “The Slug!”. This loser first appeared in Captain America #324 and then fully in #325. 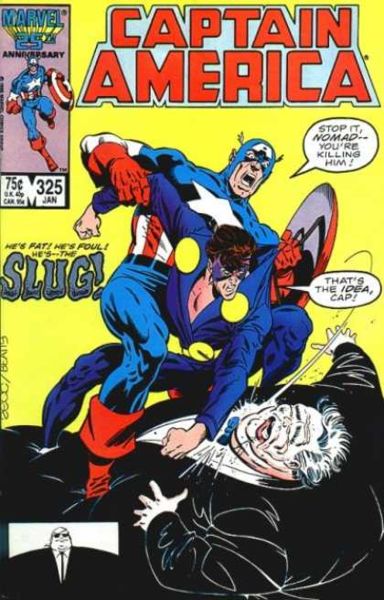 Ulysses X. Lugman the crimelord / drug trafficker / ladie’s man from Miami weighs over a thousand pounds and can’t walk! In fact he’s so damn heavy he rides around on a remote controlled tank treaded platform. Apparently though he was gifted with a very high IQ, the unique ability to float on water and the amazing fighting style of suffocatting people in the folds of his fat! He also likes to party on yachts, jam to techo pop, wear XXXXXXXL hawaiian shirts, do drugs and occasionally dip people into large vats filled with…you’ll never guess…SLUGS!! Yuck!!

It seems that throughout history Cap’s buddy Nomad can’t get enough of this fatty and pursues him several times hopping on this poor bastards belly beating him silly. 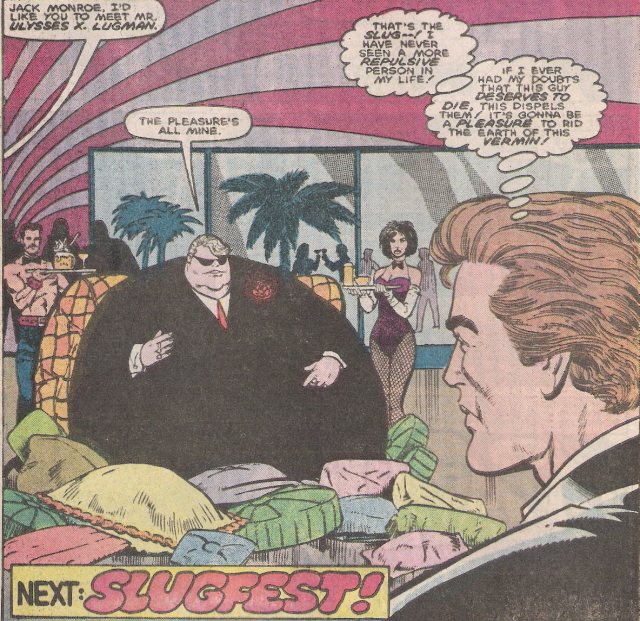 I think they should dedicate a whole issue to showing how the Slug showers and gets dressed into his gigantic tux every morning-now that would be interesting & they could even make that one into a limited series! The Slug though may be making a comeback-a few years ago he showed up in Bendis’s own New Avengers volume 1, #1 & 2. Check them out and see if you can spot him!

Oh man what i wouldn’t give to share a jacuzzi with The Slug!!

Give the guy a break already he was just chillin’ with his hawaiian shirt on! Check out this tribute site to the Slug!