It seems like cult movie connoisseurs are finally catching wind of just how awesome some of the 1980’s Mexican horror flicks truly are! Just a couple months ago Vinegar Syndrome released Ruben Galindo jr.’s three nearly forgotten creepy classics, ‘Don’t Panic’, ‘Grave Robbers’ & my personal favorite ‘Cemetery of Terror’. I’ve been yammering on about those same movies right here, years before Vinegar Syndrome got wind of them. Not to toot my own horn too much but hey give me some damn street cred! So I’m here to give you the scoop on yet another 80’s Mexican horror cult classic that I’m certain must get a fancy ass blu-ray release ASAP. 1989’s ‘Trampa Infernal’ AKA ‘Hell’s Trap’, is definitely worth tracking down!

With a lean runtime of 74 minutes, this one’s never a bore and frankly never skimps on bringing everything you love about the 80’s slasher front and center in a way they can only do south of the border. Director Pedro Galindo III introduces us to a a couple of ultra competitive rival macho men, who make a bet on catching and killing a wild bear that’s been tormenting the countryside. Of course they gather some friends for this sweet camping trip & when they arrive to their destination it’s clear that the forest is housing something much more sinister than a damn bear. We’re introduced to one hell of a slasher villain, he wears the glove of Freddy Krueger, sports a mega creepy emotionless mannequin mask with a wild hairdo and carries an arsenal of firearms with him wherever he damn well pleases.

This asshole’s copletely compelled to kill anyone who steps in his freaky neck of the woods. Yeah the plot is pretty damn flimsy just the way I like it sometimes. We’ve got a pretty sweet gang of colorful characters who go head on into battle with this weirdo, along with some well executed inventive kills mixed with plenty of action and a handful o’ cool explosions to boot. Plus who doesn’t want to spend some action packed time in 1980s Mexico? Sign me up any time! Oh Yeah and the amped up 80’s fashion sense is worth the price of admission alone, this gang of campers can sell me cool vintage clothes for my vintage shop any day of the week. So moving on, this here turns into one deadly game of cat-and-mouse that really benefits from the beautiful setting of Mexico’s woodsy backdrop. It’s fierce villain who appears to be some sort of ex-soldier with an extreme case of PTSD is bound to generates his own cult following here in the US amongst fans of icons like Leatherface and Michael Myers. This guy’s a total badass! See for your damn self:

He’s kinda got an Owen Wilson type o’ thing going on? Well director Pedro Galindo, I can only assume must be related to Ruben Galindo jr. The Galindo’s must have had some sort of stranglehold on the horror genre back then there as they’ve put out some pretty excellent movies. Pedro Galindo III also has a couple other movies on my radar, ‘Panico en la Montana’ and the sequel to ‘Vacations of Terror’. So if you’re longing for something different in the horror genre, take a trip to Mexico in the 1980s and make sure to check out ‘Trampa Infernal’. There’s a whole treasure trove of cool horror films just waiting to be discovered by American audiences from our friendly neighbors. So you heard it here first Vinegar Syndrome, Arrow, whoever! Jump on this one ASAP as it’s another true forgotten cult classic..

I’ve been on a kick lately of trying to find lost movie gems from the 1980’s, mostly searching for foreign horror flicks from that era. It’s been pretty fun finding a ton of cool Hong Kong stuff and more recently discovering an awesome 80’s horror director from Mexico named Ruben Galindo Jr. The first of his horror movies I checked out was 1985’s ‘Cemetery of Terror’ and that got me hot on the tracks of the rest of his horror output of that era. So far he’s got a great track record, as Cemetery of Terror is ton of fun, a blend of Michael Jackson’s Thriller, Carpenter’s Halloween & The Goonies. Well ‘Don’t Panic’ from 1987 is just as entertaining but in a far more ridiculous manner. It’s like a blend of Witchboard, Nightmare on Elm Street 2 with a dash of D-level John Hughes. I mean that in the best way as it’s the perfect flick to watch with a gang of ravenous cinefiles on a Saturday nite! 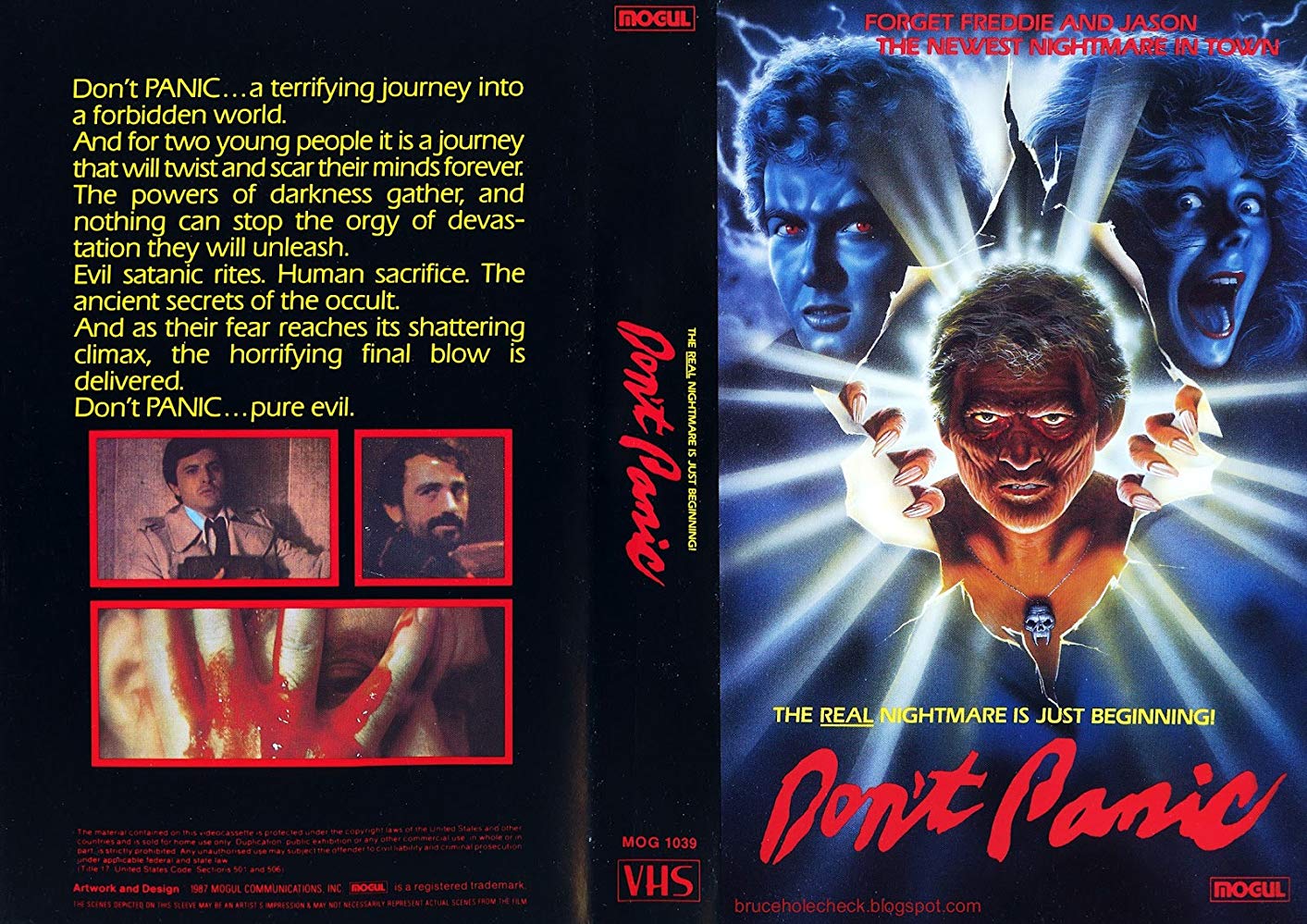 It’s main character the very whiny, curly blonde, seventeen year old american mama’s boy named Michael who’s forced to move to Mexico City to live with his alcoholic mother. On his seventeenth birthday his gang of irritating teen morons throw him a terrible party where they fully embarrass him in front of his school crush, peer pressure him to get totally wasted & eventually coax him into using a ouija board. Of course weird shit goes down and soon he’s seeing nightmarish visions of violent murders being committed all over the city nightly. While this consumes most of his time, he’s also falling head over heels in love with one of his lovely classmates. The two skip class one day an go on the greatest ridiculously awesome 80’s date ever put to screen while he takes her all over town on his bmx bike. Yeah life seems just perfect but of course he’s plagued by even more bizarre visions of murder, his eyes begin turn blood red forcing him to don sunglasses & avoid the new love of his life. Things get so crazy that he’s unable to sleep, but crazier yet, he begins to roam the streets in a pair of unbelievable dinosaur pajamas that are suited for a 6 year old! It’s one of my favorite things about this movie, those infamous PJ’s!! Best yet is that he spends probably 3/4ths of the film proudly donning them! All I wanna know is where the hell can I find a pair of those for myself?!!

Ok so this ones clearly a ton of idiotic fun, they even have a sort of Freddy Kruger type supernatural slasher dude named…..VIRGIL! He loves to taunt Michael and forces him on a wild spooky goose chase (in his PJ’s of course). This movie bleeds the 1980’s in it’s style and special effects work, modestly executed by FX master Screamin’ Mad George (Predator/ Nightmare on Elm Street 3/ Society)! Unlike ‘Cemetery of Terror’, this one’s in English (though it’s clear there’s some serious dubbing at times for certain actors) but still shows the charm of Mexico in the 1980’s, something I truly appreciate here. It’s filled with tons of ridiculous dialogue, over top bad acting and stands up there with some of the most fun the genre had to offer from it’s US counterparts.

Galindo’s got a few other horror films I need to check out still, but this far in I’m starting to think he must be come sort of cult horror director in Mexico? He clearly had his finger on the pulse of cheezy, fully entertaining 80’s horror and I really think more horror fans here in the USA should be aware of his movies. They can be a bit hard to find physical copies of but luckily ‘Don’t Panic’ has been posted on Youtube if you wanna check it out that way. If you want a physical copy you can find it on Twistedanger.com a site filled with super hard to find cult flicks!! Check it out!