Here’s something that’s truly perfect for the Halloween season at hand and any fan of the Child’s Play franchise alike. Studio ADI who are known most for their amazing practical & animatronic monster FX through out the years presents this new short web series about a creepy doll actor who plays a killer doll named “Billy” and stars in a “Child’s Play” like 80’s movie franchise.

Down on his luck doll actor Billy has seen better days during the 80’s and when he today finds out that his franchise is getting a reboot without he’s determined to make things right! Much like what’s actually going on currently with the Child’s Play franchise which itself is indeed getting a full fledged reboot, ditching the original look of Chucky and basically wiping the slate clean of everything that came before it, including Brad Dourif & Don Mancini. Each episode is only a few minutes long but it’s definitely worth it, as it indeed features some truly stunning practical fx work and an intriguing, meta look at the killer doll/hollywood reboot treatment of some of our most beloved and cherished franchises!! There’s now three mini (no puns intended) episodes out now-Check it!!

I’ve been looking forward to “Blood Glacier” now for quite a while, anything that boasts similarities to John Carpenter’s “The Thing” is always on the top of my lists of flicks I’ve just gotta see. This neat little Austrian film is a pretty fun, gory, watch and really feels like it could’ve been made in the 80’s. It’s plot has the same type of  vibe as ‘The Thing’ as we have a small band of researchers up in the mountains doing research on the effects of global warming and how it’s affecting wildlife. It doesn’t take long to figure out that something sinister is lurking around the mountain sides here, especially when they discover a giant glacier that’s oozing a strange red liquid from within. Soon the team discover that weird mutant hybrid animals are  wandering close to their station and what’s worse is that they’re hungry and pissed off! Yipee!!

This movie has some great characters, in fact the main characters are what really make this one shine.Plus one grumpy older female bad ass scientist even shout’s out one of my favorite movie lines I’ve heard in a long time- “stop eating that banana while you’re crying!!” I had to watch that part a few times! Best ever. I was thinking the same thing right when she screamed that one out! I loved the atmosphere of it all too, a serious sense of dread lingers throughout and the creatures are also pretty inventively savage. I wouldn’t put them on the same level as “The Thing” but for almost entirely practical effects this one made the most of it’s smaller budget.

Much of the monster action here is most effective by what you don’t see and the sounds heard these mutants create while on the attack. I was hoping to be dazzled by the practical effects just a tad more and really could have seen a bit more CG being used to the films benefit? I rarely say that and I guess they kept the vision pretty well focused and consistent, I was just hoping to get a better full view of some of these monstrosities. This one does play like a cool lost 1980’s creature feature and i say that in the best way. You get some cool hybrid creatures, mutated mountain goats, killer mosquitos, mutant hawls and weird insect fox hybrids and one gory ass operation sequence! This one makes me even more pumped to see  “Harbinger Down” which is another upcoming Monster movie also boasting no CGI by special effects wizard Alec Gillis and crew. In the mean time check out Blood Glacier, you can watch it on Netflix streaming to get your monster on!

Here’s a little glimpse into some of the monster making: 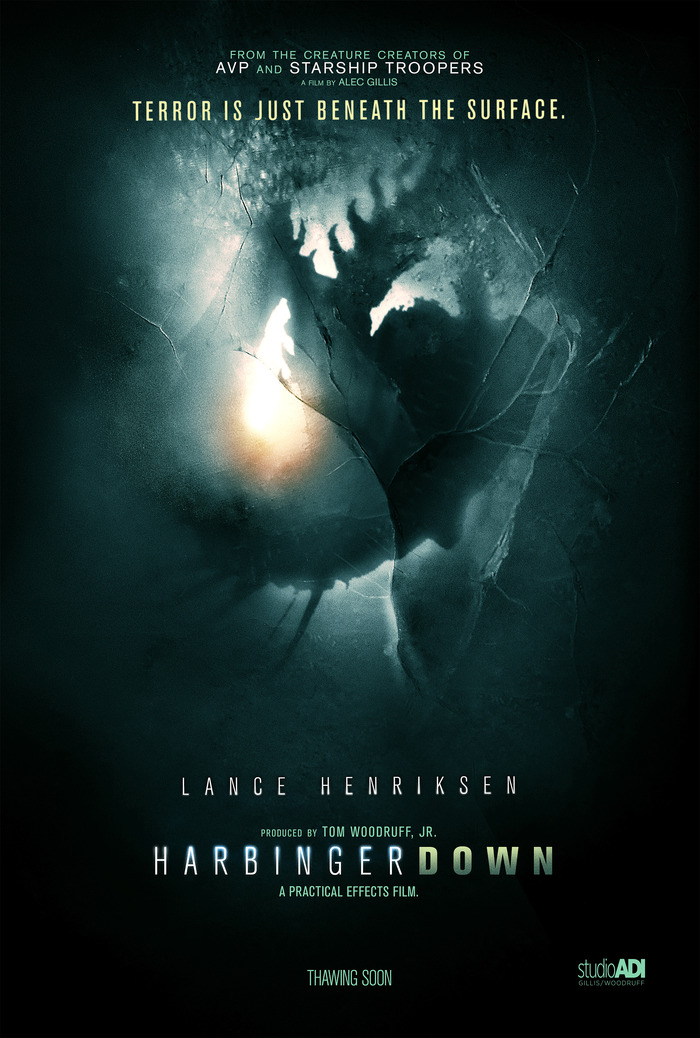